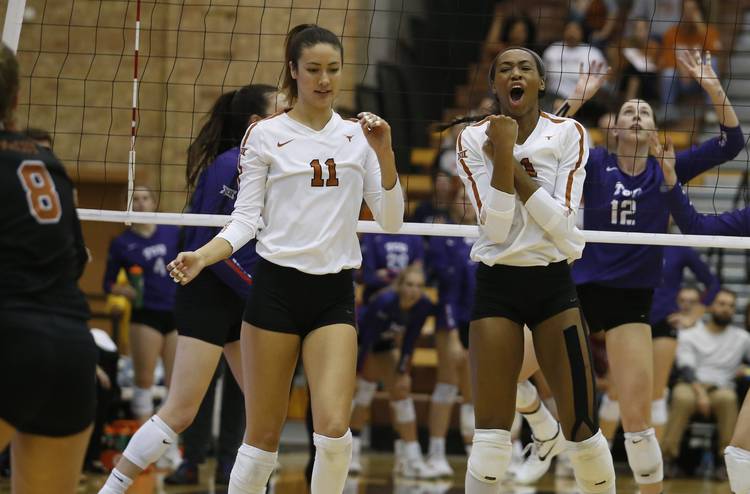 The Texas volleyball team wrapped up a busy Wednesday with a win.

“You never know what type of game or environment you’re going to get, so you can’t just say that since we won tonight, we’re going to cruise into the next game,” senior Ebony Nwanebu said. “It for sure give us some confidence to keep going and keep rolling, especially with the (NCAA) tournament so close.”

Texas opened the match with two kills from White, and UT never trailed in the opening set. White and Nwanebu got UT off to its quick start with five kills apiece.

The Longhorn offense also got a first-set jolt from freshman setter Ashley Shook, who complemented her 13 assists with four points. Three of UT’s first 13 points were recorded off of dump kills from Shook. Her service ace gave the Longhorns a 14-8 lead.

Taking advantage of a TCU defense preparing for her sets, Shook finished the match with five kills on eight attempts. The 6-1 Shook now has 67 kills over UT’s 22 matches. Ex-UT setter Chloe Collins, who was 5-7, contributed 52 kills over last year’s 32-match season.

“When you have Ashley up there, who’s very efficient with her dumps, it makes the other team fear her a little bit,” Nwanebu said. “It opens up everything.”

“I just think we have weapons literally everywhere,” Shook said.

Senior middle blocker Chiaka Ogbogu led the UT defense with five blocks. After the game, Ogbogu was recognized in a short ceremony for becoming Texas’ all-time leader in block assists. Ogbogu passed ex-teammate Molly McCage’s mark of 459 in a win over Texas Tech on Nov. 4.

A candidate to replace Ogbogu as Jerritt Elliott’s “M1” next year may be O’Neal. O’Neal sat out her senior season at Southlake Carroll – the school that also produced UT libero Cat McCoy – but was District 7-6A’s MVP in 2016. A 6-3 middle blocker, O’Neal is the daughter of former NBA all-star Jermaine O’Neal.

O’Neal is ranked second on Prepvolleyball.com’s list of the Class of 2018’s top recruits. UT freshman middle blocker Brionne Butler, who has not played yet this season, held that same evaluation for the 2017 recruiting cycle.

“We knew that (O’Neal) was going to be good, but she’s continued to climb that ladder,” Elliott said. “It’s going to give us in a few years arguably the best tandem, with her and Brionne, in the country.”

Texas may soon add to its recruiting class. Iowa libero Sydney Petersen did not sign on Wednesday, but she has verbally committed to Texas. Petersen’s mother, Bobbi, is the longtime coach at Northern Iowa.

Offered as an eighth grader, Liberty Hill’s Sedona Prince has been a long time coming for the Texas women