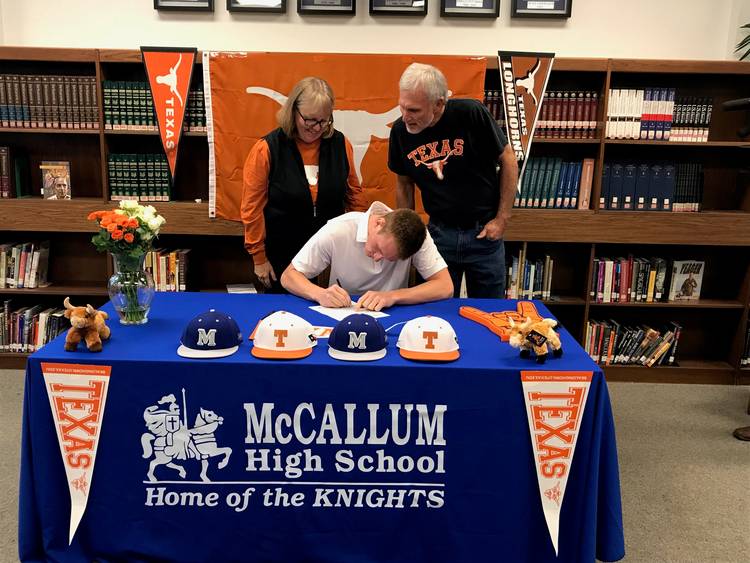 Texas recruit Mason Bryant participates in a signing ceremony at McCallum High on Nov. 8, 2017. Bryant signed with Texas as a pitcher. (Danny Davis/American-Statesman)

On Wednesday, Texas’ baseball team signed a class of 16 players. It was David Pierce’s second class at Texas; the Longhorns signed 10 players at this time last year.

The 6-5 right-handed pitcher threw only 20 innings during the 2017 season. (Primarily an outfielder, he hit all three of the Knights’ home runs). He caught UT’s attention during a strong summer, and UT assistant coach Sean Allen said, “He looks like a big leaguer already and still has room to add weight to his frame.”

On Thursday, McCallum hosted a signing ceremony for Bryant and Texas-bound rower Kate Knifton. The American-Statesman caught up with Bryant after the festivities:

Why did you decide to sign with the Longhorns?

Texas has been my life-long dream. I’ve looked up to them for a long time. I’ve been a life-long Longhorn fan and I just really couldn’t see myself anywhere else. It’s such an awesome place to be. Those were the things that influenced my decision.

Your stock really rose over the summer. What do you attribute that growth to?

This summer, my summer ball coach was working with me pretty good, got my velocity up pretty good. Last school year, during the baseball season, I was throwing probably 87, 88. I fixed a few things in my motion and gained four or five miles an hour. That’s when all the colleges started coming to talk to me.

What do you need to work on before you get to Texas?

I need to develop a lot, try to get bigger, try to get stronger up in the chest, get my legs stronger. Develop some more pitches, get more velocity, get smarter in the game. Everything needs to be improved on before I go to Texas.

What do you think you do well right now?

I’m good at bearing down and pounding the zone. Throwing strikes, that’s what I know how to do and what I’m going to continue to do.

You’re also a receiver on an undefeated football team. What are your thoughts as McCallum gets ready for the playoffs?

Family ties: UT also signed Eric Kennedy, an outfielder from Tampa (Fla.) Calvary Christian. According to Maxpreps, Kennedy hit .556 with 39 RBIs and 44 runs as a junior. Kennedy has two older brothers who played for the Longhorns. Ben Kennedy was a reserve outfielder from 2014-16. Nick Kennedy compiled a 8-2 pitching record last season before the left-hander was taken by the Colorado Rockies in the fifth round of the MLB draft.

Off and running: The cross-country team will attempt to qualify for the NCAA championships when it races in the NCAA South Central Regional Championships on Friday. A top-two finish at College Station’s Dale Watts Cross Country Course will earn the UT men or women an automatic invitation to the NCAA’s final race later this month.

The UT men, who have reached the last eight NCAA meets, are coming off a one-point loss at the Big 12 championships. Of the teams in the South Central field, however, only Arkansas joined Texas in the most-recent USTFCCCA poll. Both teams were ranked 17th.

Texas’ women’s team won bronze at the Big 12 meet. No. 6 Arkansas is the only ranked team in the women’s field.