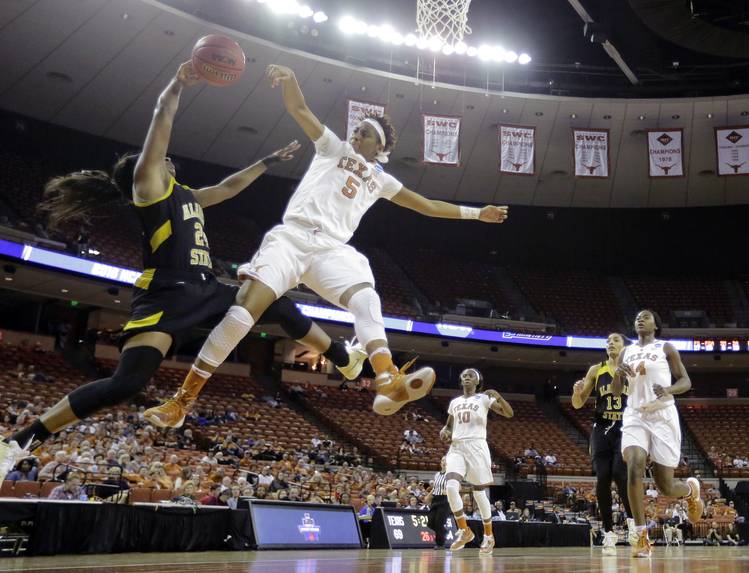 Karen Aston says that players who bond together off the court often succeed together when a game is on the line.

If the mission of playing three exhibitions this summer in Italy was to develop team chemistry, consider the trip a rousing success. The Texas women’s basketball team experienced pasta dishes, gelato, gondola rides and a tour through ancient Rome.

Perhaps the most memorable moment — and best bonding experience — came at the four-star Grand Hotel Baglioni in the heart of Florence. Eleven Longhorns dressed in burnt orange sweats jammed inside an elevator meant for six people and promptly got stuck between floors.

Mirrors inside the elevator became foggy as the anxious players waited 45 minutes for Florence firefighters to set them free.

“Getting stuck in the elevator was scary but a good memory,” sophomore point guard Sug Sutton said. “That’s something we’re going to remember for the rest of our lives.”

This season may be a memorable one, too. The Longhorns — ranked No. 2 in the country in the Associated Press Top 25 preseason poll — have the pieces to make a serious run at the Final Four. Optimism surrounding the program hasn’t been this high since the 2003 team reached the Final Four in Atlanta. Texas gets its first test on Sunday in the season opener at home against Stetson.

The Longhorns have made steady progress under Aston’s tenure, going 102-37 the past four years. They reached the Elite Eight two years ago and have earned trips to the Sweet 16 two other times in that stretch.

One goal is to unseat Baylor as Big 12 champion, a title they haven’t earned outright since 2003.

The Longhorns are loaded with 10 players who were McDonald’s All-Americans in high school, led by a pair of returning seniors — point guard Brooke McCarty, the reigning Big 12 player of the year, and all-conference guard Ariel Atkins.

Texas is buoyed by strong junior and sophomore classes led by guard Lashann Higgs, forward Jordan Hosey, Sutton and center Jatarie White, a 6-4 transfer from South Carolina who should make an impact after sitting out last season.

Sophomore forward Joyner Holmes, another all-conference selection, should give the team a big lift when she returns from suspension in late December, just in time for the Big 12 schedule.

And Aston also welcomes one of the most talented crop of freshmen in program history. Chasity Patterson, a guard from Houston, guard Destiny Littleton of La Jolla, Calif. and Rella Booth, a forward from Ocala, Fla., will be scratching for playing time.

Aston has labeled the freshmen as “gunners,” a reference to the shoot-first mentality they carried in high school. Atkins also has noticed their offensive skills, calling the freshmen “little buckets.”

“They obviously came here because they wanted to be a part of our program and they want to be part of something special,” Aston said. “They understand — as do all freshmen who come here now — that there are people in front of them.”

Patterson, for one, appears to understand the Longhorns are stacked at guard. She said her role is to support her elders, namely McCarty and Atkins.

“We’ve got great leadership with the seniors, and I hope to learn from them before they leave next year,” Patterson said.

Perhaps no one has a greater adjustment to make than Littleton, who’s not shy about taking her shot. She finished her prep career with 4,300 points, a California state record.

But as players such at McCarty, Atkins and Higgs will tell you, you don’t step onto the court during games unless you’ve proven you can play defense, too.

Littleton said she was “humbled” by the talent pool when she arrived at Texas.

“It’s made me excited to come here and put in the work and compete against these girls, but the transition was hard,” she said. “The very first practice, I didn’t think I was going to make it. Getting over that mental hump was my first obstacle.”

Collectively, the Longhorns have a few obstacles to clear. Winning the Big 12 is obviously a big goal. So is reaching the Final Four for the first time since ‘03.

Shortly before fall camp convened, the Longhorns came up with this year’s team motto: Family over Everything.

Senior Audrey-Ann Caron-Goudreau, who figures to start at forward, considers her teammates “sisters.” And sisters often don’t hide their feelings in times of crisis.

Here are some key games and stretches that will make or break the regular season for Texas:

An early holiday tournament will give the Horns tough opponents on consecutive days — Nov. 24 vs. LSU and Nov. 25 vs. Washington.

The Longhorns have grown accustomed to being road warriors, and that won’t change when they vist a pair of tough teams in the Southeastern Conference — Dec. 3 at Georgia and Dec. 19 against Tennessee.

A rematch with the Seminoles

By most accounts, the most exciting game for the Longhorns last year was the 92-88 double-overtime victory at Florida State. They meet again for a rematch Dec. 17 in Austin.

Bring on the Huskies!

UConn, which has made a record 10 straight trips to the Final Four, will be at the Erwin Center on Jan. 15. The Huskies are No. 1 in the preseason for the 12th time.

Best rivalry in the nation?

Baylor doesn’t like Texas and the feeling is mutual. Conference bragging rights will be on the line when the Longhorns and Bears square off Jan. 25 in Waco and then again Feb. 19 in Austin.