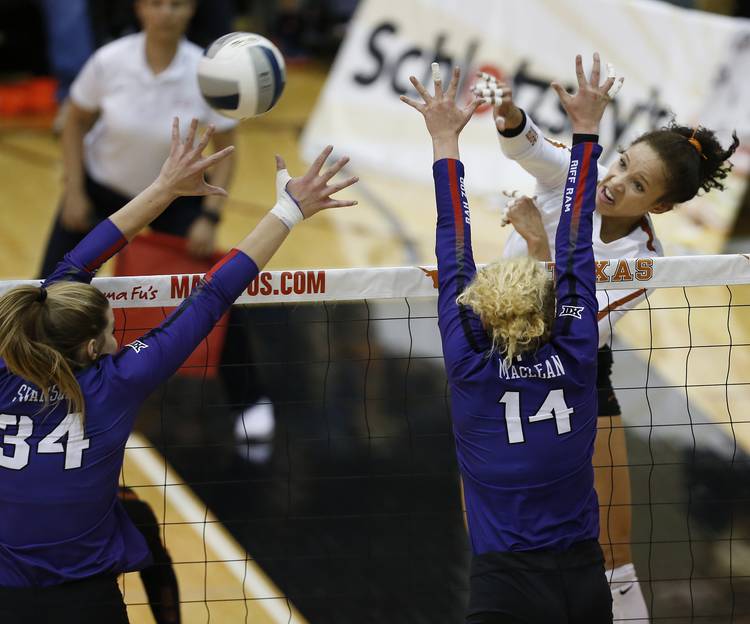 White led the Longhorns with 15 kills and recorded a double-double with 13 digs. She added six blocks, four assists and two aces in the win.

Chiaka Ogbogu was right behind White in kills with 14. She led Texas with seven blocks.

Cat McCoy led Texas with 18 digs while Claire Hahn and Autumn Rounsaville had 13 and 11.

Ashley Shook had 44 assists to go with nine digs, three blocks and a kill.

Iowa State kept pace with Texas in the first set until blocks by White and Ogbogu put the Longhorns up 21-18. Shook’s lone kill closed out the set for Texas.

White had multiple kills that put Texas up 20-15 in the second set. Sun converted her eighth kill to secure the second set victory.

The Cyclones took the third set as they tried to stay alive in the match. Monique Harris scored set point on a kill that landed in the back corner for Iowa State.

Texas took a 4-0 lead to start the fourth set and cruised to the match victory.

The Longhorns volleyball team next takes on No. 11 Kansas at Gregory Gym on Wednesday at 7 p.m. The game will be televised on Longhorn Network.