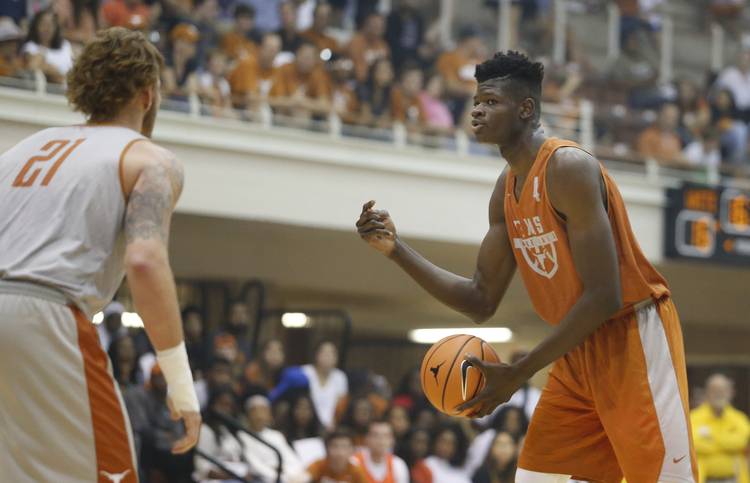 Texas' Mo Bamba (4) looks to get around Dylan Osetkowski (21) during the Texas Tip-Off event at Gregory Gym, Wednesday, Oct. 18, 2017. (Stephen Spillman / for American-Statesman)

5. The Bamba hype is real

Mo Bamba is widely believed to be a lottery pick lock in 2018. The chances of him returning for a sophomore season are not good. Luckily for the Longhorns, he appears to be ready to make the most of his lone season at Texas. Case in point? Look at his debut. Bamba was so supposed to be a little raw on offense, but 6-of-9 shooting and 3-of-4 from the free throw line suggests otherwise. He also grabbed eight boards and blocked four shots. Throw in a steal and he was by far the most productive player in Texas’ 105-59 season-opening win over Northwestern State.

Let’s not kid ourselves, tougher games will come for Bamba. But probably not until next week at the earliest– and, frankly, if Texas doesn’t play Duke at the PK80 tournament in Oregon next week, it may be until Michigan comes to Austin on Dec. 12 until we see the 6-foot-11-inch big man pushed a little down low.

Most thought Texas’ length, depth and athletic ability would be a strength this season. And of course the point guard play would be improved. But the one hang-up would be the 3-point shooting of Texas. The Longhorns shot 29.2 percent from beyond arc last season as a team. That was good for 345th in the nation. There are 351 Division I college basketball teams. Texas shot slightly better than that against Northwestern State (a little above 30 percent), but that’s because they took 33 3-point shots in a game that was never close. Jase Febres was 3-of-7 and and maybe can turn into a long-range specialist off the bench.

Texas shouldn’t be as reliant on the 3 as many teams are these days. With Bamba and a deep front court along with elite athleticism at the wing position, Texas can attack the basket, but maybe the 3-point shot can return to the gameplan?

Counter argument: 33 3-pointers is a lot, and Kerwin Roach and Andrew Jones, two starters, were a combined 2-of-10 from the arc (Roach was 0-for-4).

Technically the first of two games Texas plays in the PK80 Tournament, but these will be in Austin.

The elevator New Hampshire pitch: Led by a Converse Judson High School product in the front court, Tanner Leissner, the Wildcats were 20-12 overall last season and 10-6 in the America East Conference. It didn’t make the tournament.

Interesting note: the Wildcats play Texas and Florida in back-to-back games after notching their first win of the season, 95-39, over Wheelock College —  which we can only hope is a college dedicated to unlocking your steering wheel (we kid, we kid).

New Hampshire was the 205th-ranked team in the nation according to CBS Sports’ Matt Norlander in the preseason.

The second game of the PK80 Tournament Texas will play in Austin.

The elevator Lipscomb pitch: Rob Marberry and Garrison Mathews were All-Atlantic Sun players last season for a squad that was 20-13 overall and 11-3 in conference. It didn’t make the tournament.

Mathews, a 6-foot-5-inch junior guard starts the year on the Lou Henson Award watch list. He scored 39 points in one game last season against Jacksonville and became the “fastest player in NCAA Division I era” to reach 1,000 points according to the team’s website. He averaged 20.4 points last season. Marberry, a transfer from Western Kentucky, is a 6-foot-7-inch junior forward who was second-team all-conference last season and averaged 12.7 points for the Bison.

Interesting note: Texas fans will know if they should be worried about Lipscomb after Tuesday. The Bison play Alabama that day.

Another interesting note: After playing Texas at 4 p.m. on Saturday (don’t forget to flip over to Longhorn Network after the Texas-West Virginia football game), the Bison play Abilene Christian on Monday. So, assuming the team stays in Texas on Sunday and Monday, what should they do in Austin on Sunday (I mean, are they really going to spend two days in Abilene)?

Well, Franklin Barbecue is supposed to re-open this week, I suggest that.

Lipscomb was the 142nd-ranked team by Norlander in the preseason.

According to multiple recruiting sites, Shaka Smart and the Texas staff watched Quentin Grimes’, 247 Sports ‘ No. 1 player in the state of Texas and 5-star guard from The Woodlands College Park, season-opening game. He scored 31 points, grabbed 13 rebounds and had 5 assists.

Shaka Smart watched Quentin Grimes play last night. Bill Self is meeting with the five-star guard tonight. Coming down the stretch in a key recruitment for Texas & Kansas.

The feeling is Grimes could be committing soon. He tweeted this Monday morning:

Grimes, who played for an Adidas AAU team (that matters in recruiting stories these days) has been seen as leaning Kansas for a while now. Recruiting site 247 Sports had their Crystal Ball projections at 80 percent for Kansas. But if Texas can land Grimes it would be the second 5-star head-to-head recruiting battle Smart has edged out against Kansas in three years (we all remember the great spring and summer of Jarrett Allen).

As it stands now, 247 Sports projects that for either Kansas or Texas, Grimes’ commitment would push their current recruiting classes to No. 1 overall. It would be the first 5-star commit for Texas in the current cycle and second (or third depending whose rankings you believe) for Kansas. Who knows how long that will last as Duke has three 5-star recruits committed and would easily vault to No. 1 with just one more 4-or-5-star commit.

Later Monday morning, Grimes announced that he’ll be choosing his next team on Wednesday:

Higgs, McCarty lead No. 2 Texas to season-opening victory over Stetson