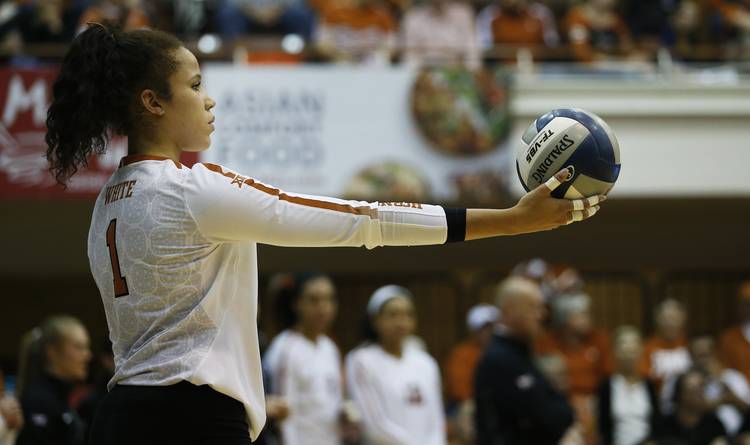 When Texas hosts rival Kansas on Wednesday, it will do so as the No. 2 team in the AVCA’s national poll. What do the pollsters love about the 21-2 Longhorns, who were ranked third last week?

The Longhorns are hitting .311, a percentage bettered by only seven teams in the NCAA.

If you’re looking for a blemish, you might find it at the service line.

Texas has served only 78 aces this season, a total that has been bettered by 326 teams. The Longhorns also have committed 187 service errors.

“Our serving and our passing has been the areas that we’ve really been trying to really shore up,” Texas coach Jerritt Elliott said. “We’ve had good serving matches and some matches where we’ve missed a few too many. What the fans don’t understand is you’ve got to serve tough.”

Freshman setter Ashley Shook downplayed that lack of aces following last week’s sweep of TCU. Shook said it also is important for serves to throw opponents “out of system,” which also factors into Texas’ defensive statistics.

Elliott said he’s OK with two missed serves each game. Three, however, “gets a little bit sketchy, and then when we get into four and five, that’s where it can really start hurting you.”

Outside hitter Micaya White, the team’s only jump server, leads the team with 18 aces. She also has a team-high 54 service errors, and Elliott said her serves were “more risk versus reward, but we’ve got to get it to be a little bit more consistent.”

Three other Longhorns — McCoy with 15, Ogbogu with 13 and Lexi Sun with 10 — also have double-digit aces. And Shook, despite three errors committed last week against Iowa State, also drew praise from Elliott.

NCAA rules allow only 15 substitutions per set, so UT’s starters must be able to serve. Elliott, though, has found some room in his rotation for serving specialists like Claire Hahn and Natalie Gilbert.

Gilbert, a junior, has appeared in 34 sets. Using a float serve, she’s recorded four aces, two of which came against then-No. 1 Minnesota. She has five service errors.

In Texas’ 3-1 win over Iowa State, Gilbert was a four-time substitution. (Listed on UT’s roster as a libero, she also subbed in once as a defensive replacement). In three of those sets, she replaced White on a trip to the service line. She filled in once for Ogbogu.

“One of my goals at the beginning of the year was to be a servant leader and put my teammates before myself, ” Gilbert said of her role. “I never counted myself out by working toward it every day and grinding.”

Gilbert, who was a high school teammate of Ogbogu’s at Coppell, appeared in only two matches over her first two seasons. In fact, Gilbert was given a chance to serve last year against West Virginia and she “basically tripped on myself and missed my serve.”

Elliott has said he found some playing time for Gilbert earlier this year after a strong week of practice. She said the experience and her teammates have helped her deal with her anxiety. She, in turn, has given UT another option at the service line and “it’s been really fun.”

Very excited to announce the addition of Sydney Petersen to the class of 2018. Welcome to the family, Sydney! 🤘 pic.twitter.com/nLB39ZSW4q

In the books: Texas pounces on McNeese State 100-34