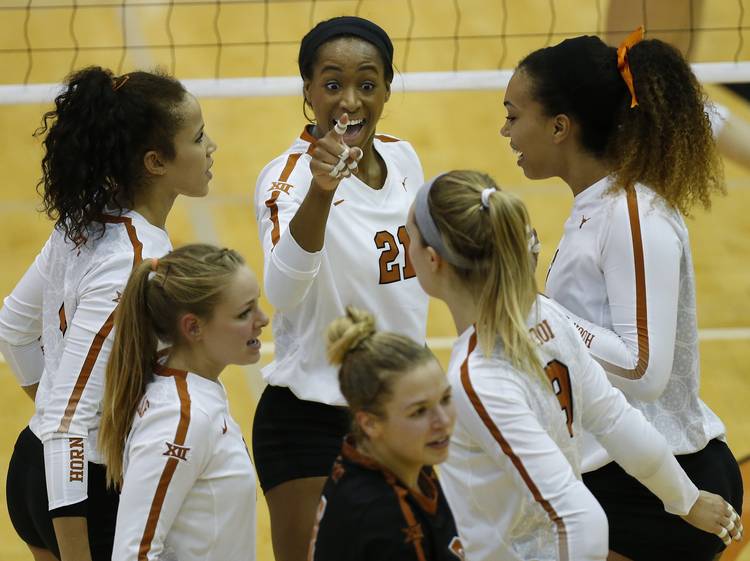 Texas senior Chiaka Ogbogu (21) celebrates a point against Kansas on Nov. 15, 2017. Texas will host Fairfield in the first round of the NCAA tournament. (Stephen Spillman / for American-Statesman)

Senior middle blocker Chiaka Ogbogu matched a season-high with her 14 kills in a 25-23, 25-22, 25-16 sweep of No. 16 Kansas. With the win in front of an announced crowd of 4,001, No. 2 Texas secured a share of the Big 12 championship. The Longhorns have no room remaining on the three banners hanging in Gregory Gym that celebrate the nine Big 12 championship already won by the program.

“Not winning it last year was obviously disappointing, and that was one of our main goals this year was to bring back a Big 12 championship,” libero Cat McCoy said. “We take a lot of pride in this conference, it gets better every single year. For us to at least win a share of it, it says a lot about this team.”

Texas sprinted to a six-point lead in the opening set, but Kansas crawled back and forced a 23-23 tie. UT eventually clinched the set on a KU attacking error, and Ogbogu broke the tie with her fifth kill. Ogbogu accounted for one-third of Texas’ kills in the first set, and she hit .714.

A three-time Big 12 Defensive Player of the Week this season, Ogbogu added six more kills in the second set. She could have had another kill, but it was taken off the stat sheet following an odd second-set sequence.

Kansas coach Ray Bechard successfully challenged that none of his players touched an attempt by Ogbogu — which had landed out of bounds — at the net. After Kansas won that challenge, Texas appealed that the ball did not go out of bounds. UT lost that second challenge.

After the match, Texas coach Jerritt Elliott said the video used by the referees was different than the one shown on the large screen inside Gregory Gym. On that replay, Elliott argued, Ogbogu’s attempt clearly landed in bounds.

The two-challenge play turned a 15-13 lead for Texas into a 14-14 tie. Kansas then scored three of the match’s next four points. Texas, however, rallied and closed out the set on a 6-2 run.

“It was challenging to be idle for that long,” Ogbogu said. “We just kind of regrouped and made sure we knew what we were doing the next point. Once we got that focus back in together, we started getting on those runs.”

Texas pulled away from Kansas in the third set, wrapping up the victory on kill by sophomore Micaya White. White and freshman Lexi Sun each contributed 12 kills, and Texas hit .337 as a team.

The night, though, belonged to Ogbogu, who matched her kill total from last weekend’s 3-1 win at Iowa State. Ogbogu also added two blocks. Ogbogu did not play in 2016, so this year’s conference championship was her fourth.

“I feel like it’s just the cherry on top of the cake,” Ogbogu said. “It’s awesome to do it with this class, because we’re all so close.”

Texas is off until next Wednesday’s home match against Oklahoma. The Longhorns then close out the regular season on Nov. 25 with a trip to Waco.

Listed second in the AVCA’s national poll and fifth in the RPI rankings, the Longhorns are attempting to secure one of the top four seeds in the NCAA tournament. A No. 1 seed would keep Texas at home in the postseason until it loses or reaches the Kansas City-hosted Final Four.