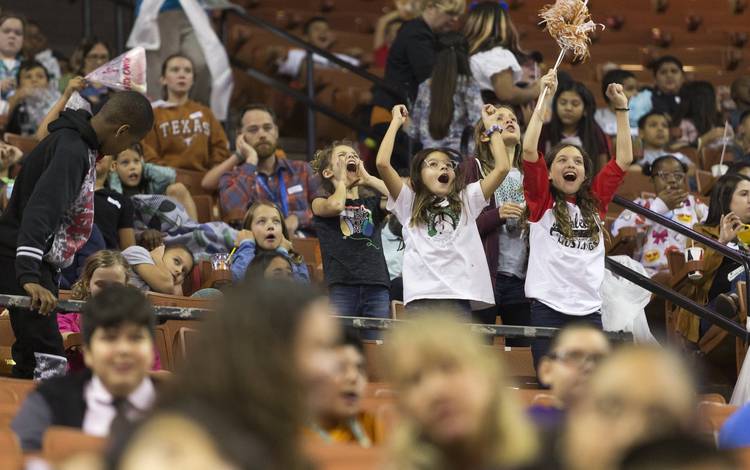 Students from around the Austin metro cheer for the Longhorns during a NCAA basketball game at the Frank Erwin Center Wednesday, Nov. 15, 2017. (Stephen Spillman / for AMERICAN-STATESMAN)

It was a milestone day for Texas senior Ariel Atkins on Wednesday — and a chance for 5,400 area school children to cut loose.

Akins scored 23 points to power the second-ranked Longhorns to a 100-34 win over McNeese State at the Erwin Center. It was a fun game for the students, who represented 54 schools in the Austin area. The seventh annual 40 Acres Field Trip was a blend of high-decibel noise and on-court precision from the home team.

The kids got to see Atkins, Texas’ 5-11 senior guard, score her 1,000th career point on a short banker early in the third quarter.

In a game with little intrigue regarding the outcome, Texas showed that its perimeter game appears to have improved. The Longhorns ranked last in the Big 12 in total three-pointers last season (137) and never had more than nine in a game. Against the Cowgirls, Texas hit nine treys, eight in the first half.

Atkins opened the game with a three-pointer and Brooke McCarty followed with another long-distance swish 20 seconds later. The Longhorns hit five of their six three-pointers in the first quarter.

“I think Jordan is light years from where she was last year,” Thompson said. “Just as far as her confidence and just kind of applying the things that she has learned, but also being who she is, that’s kind of our focus on our post players. We all have these big personalities yet we are so different and I am encouraging them to be who they are.”

Texas is the No. 2 team in the country for a reason, McNeese coach Kacie Cryer said: “They’re so deep, they don’t lose anything when you take the starters out.”

Cryer was among many who complimented Texas for playing host to school kids. “This is something I’m going to take to our marketing department back home,” she said, adding that McNeese will open a new 4,000-seat arena next season on its Lake Charles, La., campus.

Behind Atkins, Texas led 32-8 after the first quarter and 58-14 at halftime. She hit 8 of her 10 shots from the field, 4 for 4 on three-pointers and 3 for 3 on free throws. She was thankful to her coaches for helping her progress as a player.

“To have coach (Karen) Aston, coach Tina, coach Jamie (Carey) reminding me of what I’m capable of, it’s a constant reminder of a lot of things, to have my teammates and my people around me to believe in me and to sometimes force me to believe in myself when I get a little off,” she said.

This marked the first time the Longhorns scored 100 points since they defeated Sam Houston State 109-48 on Dec. 15, 2013. Freshman Rellah Boothe scored the 100th point with a layup with 8 seconds to play.

The Longhorns, who improved to 6-0 against McNeese State, return to non-conference action with a home game Friday night against UTSA.

In the books: Texas pounces on McNeese State 100-34

Back on top: No. 2 Texas dethrones Kansas on Chiaka Ogbogu’s big night