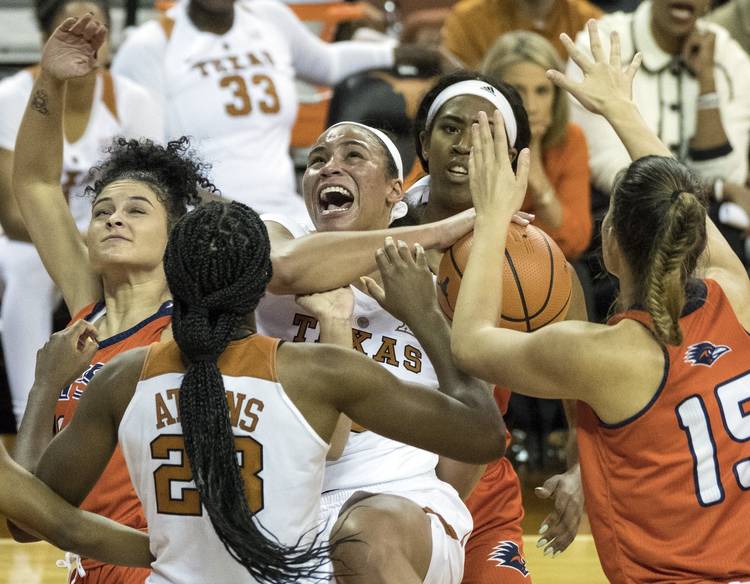 Texas Jada Underwood (12), center, is as she goes up for a shot surrounded UTSA defenders during the second half of NCAA college basketball game, Friday Nov.17,2017, in AUSTIN, Texas. Texas defeated UTSA 120-70. (AUSTIN AMERICAN-STATESMAN Photo/Rodolfo Gonzalez)

A bit player for the Texas Longhorns last season, Jada Underwood operated on Friday night as if she intends to become something more.

Underwood had 19 points and nine rebounds, both career bests, as the No. 2 Longhorns defeated Texas-San Antonio 120-70 in front of an announced crowd of 3,135 at the Erwin Center.

Texas (3-0) has nine McDonald’s All-Americans on its 13-player roster. A 10th All-American, Joyner Holmes, was suspended until Dec. 23 by the university for an unspecified violation.

“I come into practice every day with the mindset that I’m playing with the best, so just compete with them,” Underwood, a 6-foot sophomore, said.

She played 10 minutes a game as a freshman and is averaging 17 this season.

Brooke McCarty, a senior guard and the Big 12 player of the year last season, scored 18 for Texas, shooting 7-for-11 from the field, including 3-for-4 on 3-pointers, in an efficient 21 minutes. Ariel Atkins and Chasity Patterson added 13 points each, combining to hit 11 of 14 shots.

“They can beat you in so many ways,” UTSA coach Kristen Holt said.

Texas guard Lashann Higgs left the game early in the third quarter after she was knocked to the floor by a UTSA player setting a screen. Higgs hit her head on the court. After being examined by medical personnel, Higgs was cleared to return but watched the rest of the game from the Longhorns’ bench.

Chidomere scored 26 points in her season debut against Texas-Arlington on Wednesday after missing UTSA’s first two games for personal reasons. She had only four points by early in the third quarter against Texas while being guarded primarily by Higgs, a junior angling to become the team’s defensive stopper. After Higgs left the game, Chidomere produced six quick points and kept scoring.

Even so, Higgs made her case to assume a role formerly taken by Brianna Taylor, a senior last season for the Longhorns.

“I think she is ready,” Aston said. “I do think Lashann is prepared for that.”

The Roadrunners scored 43 in the second half, and that did not go unnoticed by Aston.

“I’m going to nitpick quite a bit about our defense, or lack of, in the second half,” Aston said. “But three games in a span of six days, it’s tough.”

Aston said her three talented freshmen – Patterson, Rellah Boothe and Destiny Littleton – will have to get better on defense if they want the opportunity to display their impressive offensive skills in important games.

“If you are not playing defense for coach, then you are not going to play at all,” McCarty said.

Asked recently how long the acclimation period tends to last for freshmen, Aston said: “For as long as they want to be stubborn. There is no question our freshmen can score. They have to learn the pace of the game and the details. They can get there if they make their minds up to do that. That happens in practice, not the game.”