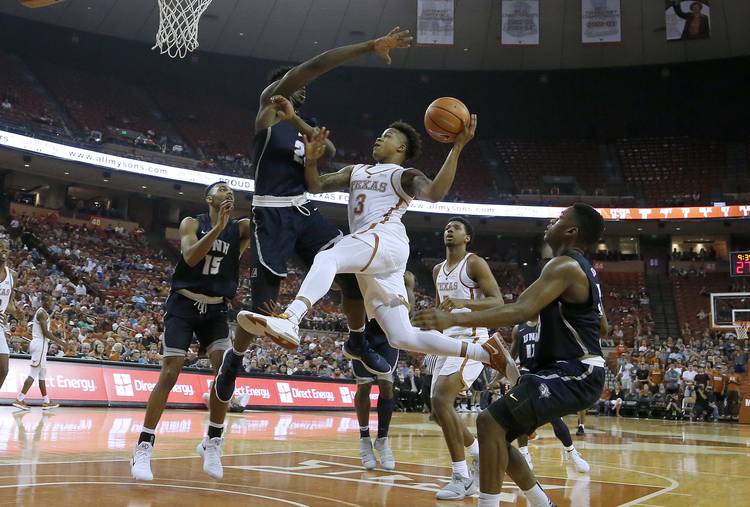 Jacob Young #3 of the Texas Longhorns leaps to the basket against the New Hampshire Wildcats at the Frank Erwin Center on November 14, 2017 in Austin, Texas. (Photo by Chris Covatta/Getty Images)

5. A perfect week on the court, but a loss in recruiting

The Longhorns scored two wins last week over New Hampshire and Lipscomb. Texas took down the Wildcats 78-60 on Nov. 14 and four days later beat Lipscomb 80-57. The quick recap of the week: Dylan Osetkowski had a double-double, Mo Bamba missed the New Hampshire game, then got dunked on against Lipscomb, but then made Lipscomb pay for it and Texas has yet to allow more than 60 points in a game.

A few more details: Texas shot 7-of-24 from beyond the arc against New Hampshire and just 3-of-16 against Lipscomb. That’s 10-of-40 last week. Not great. But then again, Texas still made both games no contests in the second half.

Off the court, the Longhorns waited for word on Texas’ top-rated basketball recruit, Quentin Grimes, and where he would be going to school next year. However, Texas couldn’t edge out Kansas. Grimes’ mother is a Jayhawk, so it was probably an uphill climb to begin with. The last three top-rated Texas high school prospects have now selected Kentucky (De’Aaron Fox and Jarred Vanderbilt) and Kansas (Grimes).

However, Texas has done a good job with in-state recruiting as a whole, and their overall recruiting class is projected to be a top-10 class with the spring period yet to come.

In 2016, Shaka Smart’s staff landed Jarrett Allen and Andrew Jones — two McDonald’s All-Americans and top-5 Texas recruits. This past recruiting cycle Texas landed the sixth- and seventh-rated players in Royce Hamm and Jase Febres. Even though Grimes is out, Texas has the No. 2-rated Texas player in Gerald Liddell of Cibolo Steele heading to campus next year as well as the No. 14 player in the state, Brock Cunningham of Westlake.

4. The defense has been great so far

Let’s not pretend that Texas has played a team with the roster to match the Longhorns’ length, athleticism and depth. They haven’t. That’ll change with Butler and possibly Duke this week. But let’s also not be blind to what’s very easy to see: Texas is pressing and trapping, Texas is defending the rim and these players look like they’re enjoying the defensive end so far.

The stats are backing that up. In two games, Mo Bamba has nine blocks and that doesn’t count the amount of times he’s altered shots by just being a threat. Texas’ 21 blocks is 19th in the nation, according to Sports Reference. They’ve forced 50 turnovers in three games and have turned the ball over just 26 times. Texas is holding opponents to 23 percent shooting from the outside and just 38 percent inside. Combined, teams are shooting just 32.8 percent from the field — 11th in the nation. The 58.7 points Texas is allowing per game is 29th in the nation.

The PK80 Invitational — named for the shoe tycoon and Nike founder Phil Knight, who is 80-years-young — was announced more than a year ago and Texas was one of the teams invited. Why wouldn’t one of Nike’s most profitable and popular programs be there? The field features some of the best programs and coaches in college basketball, including the No. 1-ranked Duke Blue Devils, the defending NCAA National Champion North Carolina Tarheels, a Final Four and champion runner-up last season, Gonzaga and more.

Outside of Portland State, Butler and Duke– all teams Texas either will or could play in the first two games–what’s the sexiest matchup for a possible third game?

I’ll say Florida. The Gators are ranked No. 7 in the nation. Gonzaga is No. 17. Florida, with a handful of talented returning players from last year’s Sweet 16 Gator team, is the best squad in the bottom side of the Motion Bracket.

Eat your turkey– and, for some, your side of brussel sprouts— and then settle in to watch the Longhorns play the best team they’ve faced yet, Butler.

The elevator pitch: While the Bulldogs aren’t ranked, they do return a handful of talented players from their 2017 Sweet 16 team, including Kelan Martin and Kamar Baldwin.

Interesting note: Butler is averaging 11.5 turnovers a game. They’ve forced 16.5 per game. Now, small sample size with just four games played, but this should be a game where freshman point guard Matt Coleman could really shine.

Butler is 3-1 on the year having lost to Maryland on Nov. 15 in College Park, Maryland. Butler beat Kennesaw State, Princeton and Furman.

1. Texas is either playing Portland State or Duke on Friday

The Texas football game kicks off at 7 p.m. on Friday at Royal-Memorial Stadium. While fans do whatever they do to get ready for the football game, they can watch this on ESPN (or ESPNU). If they lose on Thursday, the Longhorns will play at 2 p.m. on ESPN U and — a hunch — will probably play Portland State in that game (unless Duke suffers a historical upset).

That’s the worst case scenario and just a giant let down.

Elevator pitch on Duke: They start a bunch of future NBA first-round draft picks, including the possible No. 1 guy in Marvin Bagley who is doing his best to overshadow the best college basketball player in the country, senior Grayson Allen.

Allen scored 37 points in a win over then No. 2-ranked Michigan State last week. Bagley hardly played after taking a finger to the eye.

Interesting note: My guess is representatives of all 30 NBA teams will be in attendance for this game. Mo Bamba vs. Marvin Bagley is one of those rare lock lottery pick matchups we almost never get. Will Bamba even draw Bagley as a defensive assignment? I ask because Duke’s other star recruit (they have a lot of those) is Wendell Carter Jr. who is also a possible top-10 pick next summer. The other big guy  Duke has is 2016 Texas product (No. 2 player in the state that year) Marques Bolden of DeSoto High School who is a sophomore center for the Blue Devils.

The guards also have juicy matchups. Allen will have to face some of the most athletic players he’s played so far and could all year in Kerwin Roach and Andrew Jones. Trevon Duval, again another possible lottery pick, will likely be matchup against Matt Coleman. Then there’s Gary Trent Jr. for Duke, who will get either Roach or Jones.

The big question for Duke entering the season was whether Duval could lead the offense and be a true point guard. He had 11 assists in his first game, so it looks good so far, but he’s not faced a pressing and trapping defense like Texas yet.

Oh, and Duke’s coach has more wins than any college basketball coach ever, so there’s that.

The Blue Devils were the AP No. 1 ranked team in the preseason poll and are 4-0 with Furman on the schedule tonight.