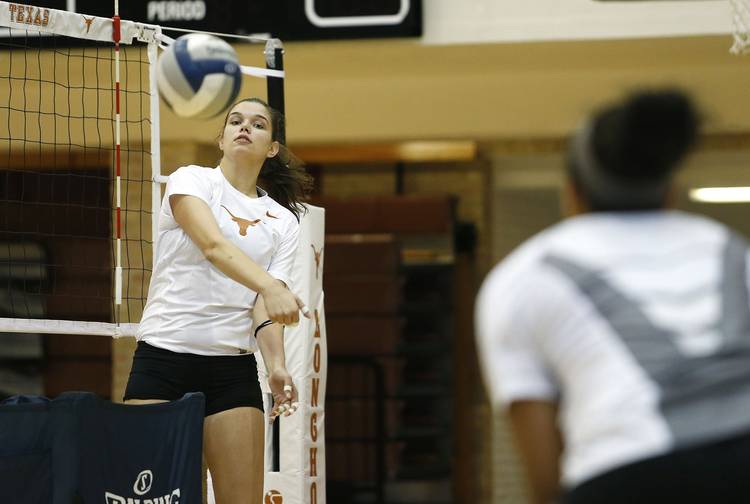 As No. 2-ranked Texas aims for an outright Big 12 volleyball championship with a win over Oklahoma, the Longhorns also will celebrate their four seniors playing their final regular-season match — outside hitter Ebony Nwanebu, middle blockers Chiaka Ogbogu and Mirta Baselovic, and libero Cat McCoy. They will be presented with flowers and framed jerseys and will have their career accomplishments announced.

Baselovic, however, doesn’t have the résumé of her fellow seniors. But her leadership — and one big block in 2015 — have been invaluable for the program.

Baselovic, a 6-3 middle blocker from Croatia, was introduced to the sport by her father Mario, who played professionally. She aspired to play college volleyball on the East Coast. But in Texas? “I don’t want to hang out with cows and cowboys,” Baselovic remembered thinking.

Elliott, whose first recruiting class at Texas in 2001 featured Mira Topic, a Croatian-raised outside hitter who became an All-American, convinced Baselovic to come to Austin. She appeared in three matches her freshman year before transitioning into a part-time role in 2015 and 2016. Baselovic hasn’t played this season as Texas has gone with Ogbogu, a three-time All-American, and junior Morgan Johnson in the middle.

“Everybody wants to play, but when you come to a team like Texas, you have to know that there are some great players here,” Baselovic said. “Our goal is to win, and not one player wins. My thinking before the season was I was going to do whatever I had to for us to win.”

Despite the lack of playing time — Elliott has not said whether she’ll play on Wednesday — Baselovic’s voice has a lot of sway in the UT locker room. One of the team’s three captains, she has essentially accepted a role as a coach wearing a No. 17 jersey. During timeouts, she can often be spotted crouching alongside the UT coaches. Ogbogu and Johnson have entrusted her as their off-court eyes.

“Every time I come off the court, I’m immediately going to Mirta and talking to her about what she sees, why this isn’t working, what she thinks I need to do with certain shots,” Ogbogu said. “She has a very high volleyball IQ and sees the game so well.”

Baselovic traces her start in coaching back to a time when her club coach in Croatia kept getting ejected from matches. She will return to Texas in 2018 as a graduate assistant.

After next year, she plans to take a couple of years off from volleyball so she can “explore other aspects of life.” Baselovic, after all, has a lot of off-court interests.

She graduated this past spring with a degree in corporate communications, and now is studying global policy studies. She speaks three languages, can read German and would like to learn Finnish or Swedish. If you ask a member of the team who’s most interested in American politics, they’ll likely name the Longhorn who can’t legally vote.

Community service also has been a passion. She was named a Big 12 Community Champion for the 2016-17 school year, and a Jane Goodall quote (“The least I can do is speak out for those who cannot speak for themselves”) is pinned atop her Twitter profile. She lists equality, animal rights and the environment as her favorite causes, but “I haven’t really defined my passions yet.”

Baselovic walked alongside other UT athletes in the Juneteenth parade this summer, and she organized a “#HornsOverHarvey” fundraiser in September. Last year, Baselovic was the toughest booking for Nwanebu’s season-long series of Twitter videos. Baselovic finally agreed to go on the season finale of “EbbOnTheWeb” if a crowdfunding campaign reached $219.  That raised $865 for the International Rescue Committee.

“If that’s what it took, then I’m happy about it because it was more than ‘EbbOnTheWeb,’ she was helping the Syrian refugees as well,” Nwanebu said. “I want to get her back on the series sometime this season. Hopefully it won’t be that difficult, but we’ll see.”

Baselovic measures her four years through a series of memorable moments. Last year’s stand-alone play was a diving dig by Autumn Rounsaville during a frantic fifth-set rally against BYU in the NCAA tournament’s regional semifinals. One of Haley Eckerman’s kills in a regional final against North Carolina sticks out in Baselovic’s mind when she’s asked about the 2014 season.

Baselovic’s one shining moment in 2015? That belongs to her.

During a regional final against Florida, she was subbed into the match during a tightly-contested fifth set. Baselovic  recorded a block against Florida All-American Rhamat Alhassan to give Texas a 14-13 lead. UT went onto secure a trip to the Final Four with a 17-15 win.

Baselovic doesn’t yet have a lasting memory from this season. The NCAA tournament is upcoming, though. Texas (22-2) has reached the Final Four in each of Baselovic’s years on campus, but she has yet to win a national championship.

“We’re not going to be happy with the Final Four; we’re going to be quite angry if we just make it,” Baselovic said. “It’s still a big deal. I don’t want to sound ungrateful. But we work for the championship.”

After a year at Texas A&M, Tristen Bayless to join Texas’ baseball team in 2019