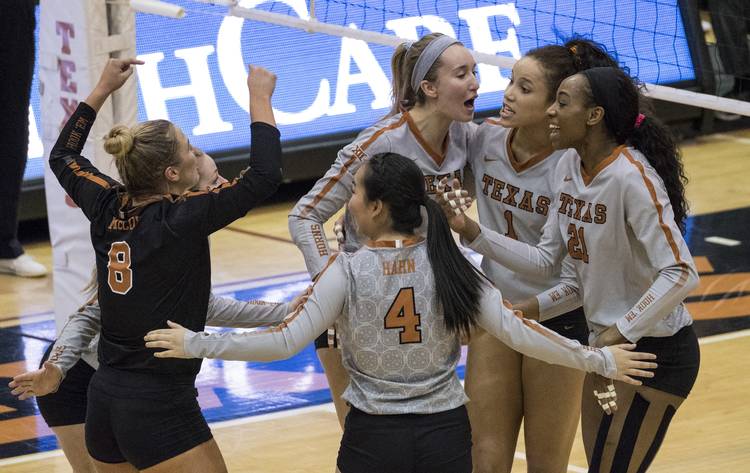 Texas seniors Cat McCoy (8) and Chiaka Ogbogu (21) celebrate a point against Oklahoma with their teammates at Gregory Gym on Nov. 22, 2017. Texas swept the Sooners to wrap up the Big 12 championship. (Rodolfo Gonzalez/for Austin American-Statesman).

On Wednesday night, Texas’ four seniors were gifted flowers, their framed jerseys and a conference championship.

“It still doesn’t feel real, I feel like it’s going to hit me eventually,” Ogbogu said. “Obviously, we still have more games to be played. I think that’s what’s making me not so emotional, that I know it’s not over tonight.”

Oklahoma took an 8-6 lead in the first set, but the Longhorns stormed to a 12-point win behind Nwanebu’s four kills. Texas hit .789 in the second set and UT pulled away from a 16-16 tie in the final stanza.

White’s 10 kills and freshman Ashley Shook’s 27 assists led the way, but the night belonged to Texas’ Class of 2018.

Nwanebu and Ogbogu each registered eight kills, and Ogbogu’s final kill sealed the victory. McCoy added 10 digs to her all-time record at UT. Baselovic recorded a kill on her first and only attempt of the season.

As a team, Texas hit a season-high .526 against the Sooners.

“I think all year we’ve been saying don’t let up, and we haven’t really executed that. I think tonight was the night that we did,” said Nwanebu, whose team closes out the regular season at No. 18 Baylor on Saturday. Ranked second nationally, Texas is still vying for one of the top seeds in the NCAA tournament.

Texas received the Big 12’s championship trophy in a postgame ceremony. The Longhorns also honored their four seniors, only two of which were recruited together.

Ogbogu was a member of Texas’ 2013 recruiting class, but she sat out the 2016 season. Baselovic and McCoy joined the program in 2014. Nwanebu transferred to Texas after two seasons at USC, but she redshirted after a back injury sidelined her for most of the 2015 season.

“We’ve talked about it how we just feel like everything happens for a reason,” Ogbogu said. “It’s so cool that us four get to end our senior year together. We just want to keep going, we just want to buy as much time as we can with this team.”

UT’s four seniors will stay involved in volleyball in 2018. Ogbogu and Nwanebu plan on playing professionally, preferably in Italy and France. Baselovic will return to Texas as a graduate assistant. McCoy, meanwhile, will join the University of Washington’s sand volleyball program as a graduate transfer.

After a year at Texas A&M, Tristen Bayless to join Texas’ baseball team in 2019