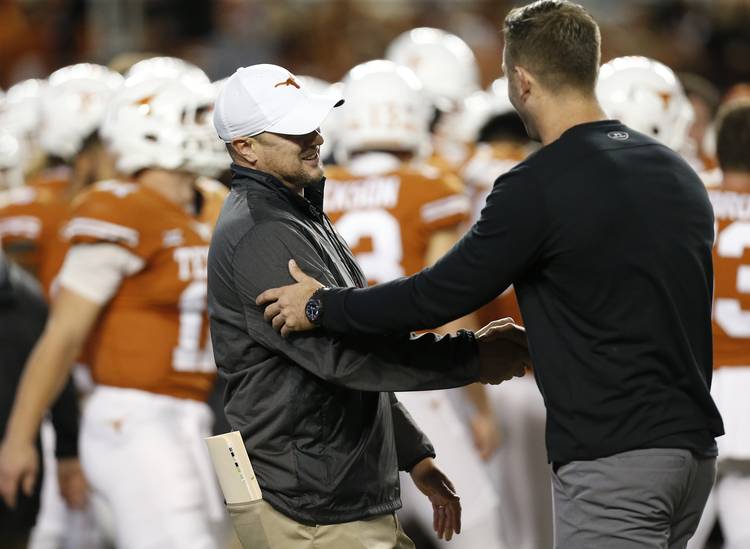 With Texas’ 27-23 loss to Texas Tech on Friday night, the Longhorns’ bowl options took on a different shade as they appear less likely to be on their way to the Camping World Bowl and more likely to be headed to the Texas Bowl or Liberty Bowl.

“I think we’d certainly consider Texas,” said David Fletcher, executive director of the Texas Bowl. “Texas has a great history and a great fan base here in Texas.”

The Longhorns would be matched up against an SEC opponent in the ESPN-owned Texas Bowl, but that league slots its teams in the bowls. The best bet for an opponent there in Houston on Dec. 27 would be a 7-5 team like Missouri, Kentucky or possibly even Texas A&M (7-4), which played at LSU Saturday night, or 8-4 Mississippi State. LSU might be a long shot.

So is a Texas-Texas A&M meeting a possibility?

“We would certainly welcome that opportunity,” Fletcher said. “I think we would all like to see it. That’s a game that resonates. But we don’t make that selection on the SEC side. We can’t control that.”

Other possibilities in the Texas Bowl are West Virginia, Kansas State and Texas Tech, but the Mountaineers lost to Texas and are without star quarterback Will Grier, the Wildcats lost to Texas and played in this bowl last year, and the Red Raiders played at the Houston Cougars this fall and are already ticketed to play in Texas Bowl host NRG Stadium against Ole Miss in a 2018 Labor Day matchup. Those are all factors for that bowl, which has already sold more than 50,000 tickets, so a fourth sellout is likely.

The bowl representatives continue to stress that postseason destinations remain speculative because of remaining conference title games next week.

If the Big 12 places both Oklahoma and TCU in the New Year’s Six games, which is very possible, the trickle down could land 9-3 Oklahoma State in the Alamo for a repeat appearance or the Camping World Bowl and Iowa State in one of those two as well. The Cowboys offer a name brand for television and outstanding offensive firepower, while the Cyclones’ tremendous fan base travels like few others.

Texas clearly didn’t help itself by falling to 6-6 and having its two-game win streak snapped by Texas Tech, which punched its bowl ticket by upsetting the Longhorns and becoming bowl-eligible with a 6-6 mark. The Longhorns completely fell out of any chance of landing in the Alamo Bowl.

The Liberty Bowl, which will pick a Big 12 team after the College Football Playoff and the Alamo, Camping World and Texas bowls, could take the Longhorns against an SEC foe Dec. 30.

As for Texas’ chances of playing in Orlando, Repchak said, “I think the road is tougher. But until today’s games are over with, it’s hard to say anyone is officially out. Nothing is out of consideration, but certainly a win (over Texas Tech) would have been much easier for Texas.”

The Camping World committee, which numbers more than 200 voting members, doesn’t meet until Wednesday night. It has an executive group to make the final selection.

“There’s still a lot of football left to be played,” Fletcher said. “A lot of teams potentially could be in Houston.”