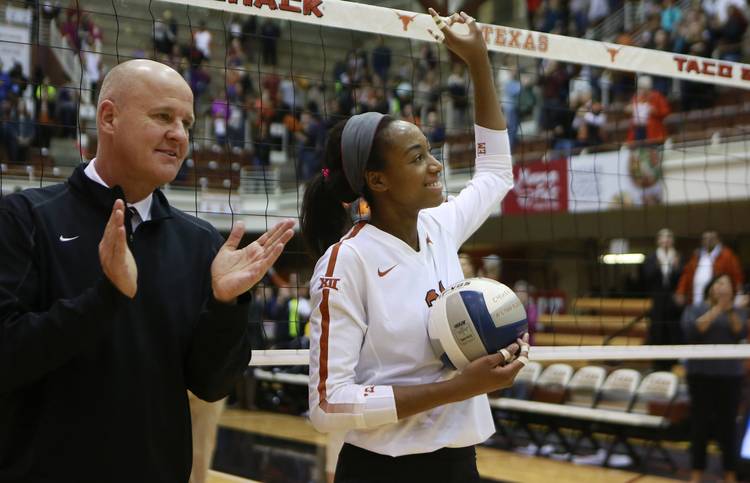 As Texas’ volleyball team celebrated in front of an orange-lit tower on Sunday evening, senior Chiaka Ogbogu stood in the middle of a team photo. Ogbogu held the Big 12’s championship trophy — the reason for the photo opportunity — with sophomore Micaya White.

A day later, Ogbogu once again stood front and center.

Ogbogu was named the Big 12’s player of the year on Monday. A 6-2 middle blocker, Ogbogu becomes the 10th player from Texas to earn the Big 12’s top honor. Eight of the last nine recipients of this award have been Longhorns.

Texas' Big 12 Players of the Year

Already a three-time All-American, Ogbogu showed little signs of rust this fall after sitting out the 2016 season. Ogbogu leads the Big 12 in blocks (1.74 per game) and hitting percentage (.392). Nationally, Ogbogu ranks second and 22nd in those statistical categories.

This season, Ogbogu was a three-time Big 12 defensive player of the week.

On Monday, Ogbogu was joined on the first team of the Big 12’s all-conference team by White, senior Ebony Nwanebu and freshman Lexi Sun. White, Nwanebu and Sun are all outside hitters for Texas. Senior libero Cat McCoy and freshmen setter Ashley Shook were second-team honorees.

Sun and Shook were also placed on the Big 12’s all-freshman team. Baylor outside hitter Yossiana Pressley was recognized as the conference’s top freshman.

Starting 5: What happened in Portland and what we know about Florida A&M