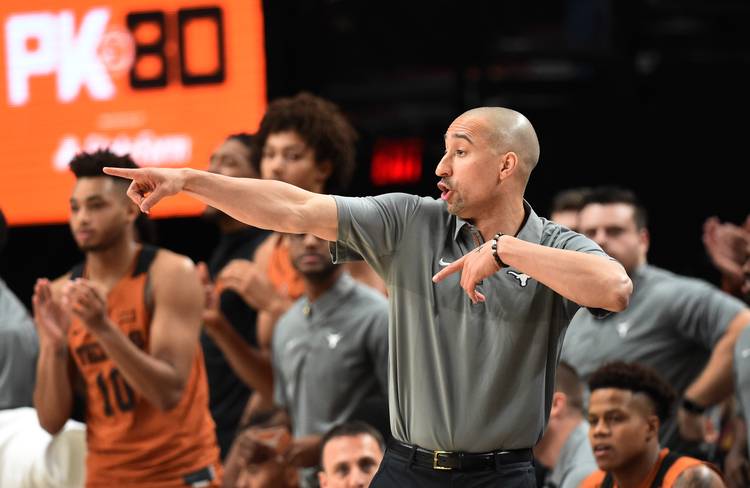 PORTLAND, OR - NOVEMBER 24: Head coach Shaka Smart of the Texas Longhorns directs his team during the first half of the game against the Duke Blue Devils during the PK80-Phil Knight Invitational presented by State Farm at the Moda Center on November 24, 2017 in Portland, Oregon. (Photo by Steve Dykes/Getty Images)

Texas went 1-2 last week in Portland at the PK80 and have just one game this week on the schedule. Here’s what you need to know.

5. It wasn’t pretty, but Texas scored a big-time win over Butler

Texas improved to 4-0 on the year with a strong showing against one of the better programs in the Big East, beating Butler 61-48. Butler was 3-1 entering the game on Thanksgiving with the one loss coming on the road to Maryland. Texas’ defense kept Butler from scoring in the 50s and held its two top players to 3-of-15 shooting from three and just 10-of-34 from the field. Also, after the Longhorns shot 29.6 percent in the first half, the team shot 50 percent in the second frame.

Yeah, both teams looked sloppy at times, didn’t shoot well at times and this game looked very much like a typical November basketball game. But this is a win that will, likely, age pretty well for Texas. Butler may not have the same squad that reached the Sweet 16 last year and once went to back-to-back Final Fours, but this is a squad that many will expect to see in the NCAA Tournament.

4. Andrew Jones looks like a man who wants to play in the NBA next year

Jones scored 18 points against Gonzaga (we’ll get there) and 16 apiece against Butler and Duke. He’s shooting 49.1 percent from the field and 85 percent from the line. He also has improved his 3-point shooting slightly, going from 32.8 percent to 33.3, which means that so far he’s heading in the right direction. He’s nowhere near a draft lock in either round right now, but he’s not far from it with a lot of basketball left to play.

One only needs to watch the end of regulation against Gonzaga to know what I mean.

After flirting with the NBA last season but choosing to return, Jones was always going to be one of the most important players for this team. With Matt Coleman running the point and allowing Jones more opportunities to play a traditional shooting guard role, and with Mo Bamba’s presence making life easier, Jones may be the key to the entire season and looks like the go-to-scorer that Texas hasn’t quite had since Isaiah Taylor left.

For Andrew Jones, so far so good this season.

Texas was 0-2 in overtime games against the No. 1 team in the nation and the 2017 NCAA Tournament runner-up, so that’s nothing to get mad about.

I’ll venture to say that the Gonzaga game was more eye-opening than the Duke game. Texas trailed 42-28 at halftime against the No. 17-ranked Bulldogs. In that span, Gonzaga went on a 24-0 run and it looked like this was going to be a major step-back for coach Shaka Smart’s team following its toe-to-toe performance against Duke.

Instead Texas rallied in the second half and Jones nailed a 3-pointer near the buzzer to push the game into overtime.

Yeah, overtime was not great for Texas, but the fact that game went into overtime to begin with is a testament to the Longhorns. They trailed 54-33 with about 14 minutes to play and allowed just 13 points the rest of the half. Texas went on a 15-4 run in the final three minutes.

There is still the bad with Texas: When the Longhorns are cold, they go real cold and dig themselves holes. However, with this defense, Texas will be able to stage rallies like that all season in spite of poor shooting.

But will they be able to hold big leads?

2. Let’s talk about that Duke game

Texas had a four-point lead around the 10-minute mark in the first half, 24-20, when Duke’s top two players, senior Grayson Allen and freshman Marvin Bagley, went out of the game with foul trouble. Texas built a double-digit lead before halftime and looked in control.

Once the second half started, Bagley and Allen returned, Duke rallied and, in the final five minutes or so, it was a normal back-and-forth basketball game. Texas had no answer for Bagley.

Duke wound up winning the game in overtime 85-78, and Bagley is going to be a very good NBA player. He scored 34 points, grabbed 15 rebounds and didn’t pick up a another foul after drawing two in the first 10 minutes of the game. He was by far the most outstanding player of the PK80 Tournament (he was unstoppable in Duke’s win over Florida on Sunday).

The matchup of Bagley and Bamba was one of the highlights of the tournament. Bamba scored just nine points and grabbed 10 rebounds (all defensive rebounds). Once he fouled out of the game, Texas had no chance at stopping Duke down low.

Texas was guarding the 6-foot-11-inch Bagley with 6-foot-4-inch Kerwin Roach at times at the end of regulation and overtime. Which is odd because Texas, even with Jericho Sims also out with fouls, had bigger options — Royce Hamm and James Banks — but didn’t use them.

Overall, Texas’ loss to Duke is another game that won’t hurt the Longhorns in the long run. The fact they took the No. 1 team in the nation to overtime is pretty impressive.

Should fans be worried about Texas’ blown lead? No. A big no.

At least not yet.

Texas has taken a lot of big leads so far and not lost them. The bigger problem has been the starts of games. Texas didn’t have a slow start against Duke and Butler, but Gonzaga blew Texas off the court in the first half, and Texas had a slow start against Lipscomb before blowing the doors off the Bison in the final 30 minutes.

Overall, a 1-2 record at the PK 80 with two overtime loses against AP top 25 opponents is nothing to get worried about. Texas very well may not lose another game (and may not be an underdog in another game) until the start of Big 12 season.

Before Texas takes a week off, the Longhorns will host the Florida A&M Rattlers on Wednesday at 7 p.m.

The Florida A&M elevator pitch: The Rattlers are having a rough season, losing four straight to start the season before picking up win No. 1 against Albany State. They will enter the Texas game with a 1-7 record (0-7 on the road).

I mean, if Texas is struggling with the Florida A&M Rattlers then it’s because they ate too many Voodoo Doughnuts in Portland. Florida A&M hasn’t been close in its losses, falling by 42 against UNLV, 31 to Miami (Fl.) and Mississippi State and 16 to Stephen F. Austin.

Watch out for Marcus Barham and Desmond Williams, they average 14 and 13.2 points per game.

Interesting note: Florida A&M coach Robert McCullum was given his third college basketball head coaching job earlier this year. After helping Dana Altman and Oregon reach the Final Four last season, he took this job. Before then he had been the head coach at Western Michigan and South Florida. McCullum is part of the Lon Kruger coaching tree. He was an assistant at Kansas State, Florida and Illinois under Kruger from 1990-2000. It makes sense that Altman would hire McCullum as Altman is also a branch of Kruger’s tree.

Golden: What will Tom Herman’s plan be for QBs for Texas’ bowl game?