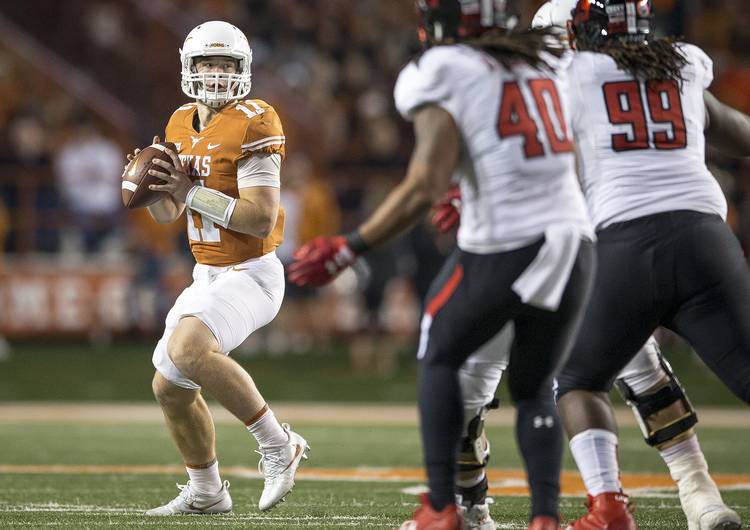 Herman needs a QB plan for the bowl game:

Time will tell if the Texas’ 6-6 coach can come up with a better plan between now and the bowl game. That will either make him a winner in his first season or continue this recent run of post-Mack futility.

Tom Herman certainly thought his team would be much better. If ever there was a group in need of those extra 15 bowl practices, it’s his Longhorns.

If the last month has taught us anything, it’s the value of good quarterbacking. Herman handed the ball to freshman Sam Ehlinger for much of the last two games and all that has really proven is he’s not quite ready to be a dependable game manager/playmaker.

Sam is an alpha dog with a gunslinger’s mentality that’s exciting at times and horrifying at others. During the weeks leading up to the bowl game, Herman will have to impress upon him the importance of taking care of the ball in the red zone.

The fourth-quarter interception followed by a goal-line fumble in overtime against USC, the interception in overtime against Oklahoma State, the 94-yard yard pick six at West Virginia, the fourth-quarter pick Thursday. Those five turnovers all came in the second half of games and all but one happened in the red zone. The last thing Texas needs is for its young quarterback to be instant offense for both teams.

With inexperience come mistakes, but Ehlinger has made some of the same errors over and over again. Buechele isn’t nearly as dynamic but he is a better protector of the ball. Herman has to ask himself if Ehlinger’s upside is worth sitting Boo Jr. full-time or worse yet, is it worth losing Buechele to a transfer?

Herman should consider any senior transfers that may be available though Texas has some good young quarterbacks entering the program in Oklahoma’s Casey Thompson and California’s Cameron Rising.

Connor Williams made the best move for his future when he decided to forgo his senior year, skip the bowl game and prepare for the NFL draft.

There will be more.

“One of the reasons I worked so hard to come back from my injury was to help the team reach its goal of playing in a bowl game, and I’m proud we were able to accomplish that,” Williams said in a statement.

Regarding other potential departures:

Linebacker Malik Jefferson had a bounce-back junior year. Holton Hill emerged as a premier cornerback in the Big 12. Safety DeShon Elliott is a Thorpe Award finalist. Punter Michael Dickson will win the Ray Guy award in a landslide.

Add in departing running back Chris Warren and offensive linemen Terrell Cuney and Jake McMillon, who walked with the seniors on Senior Day — indicating they will be leaving the program as well — and the 2018 starting lineup will take on a new look for sure.

Starting 5: What happened in Portland and what we know about Florida A&M

There’s no place like home: Texas’ Jatarie White is happy that she transferred here