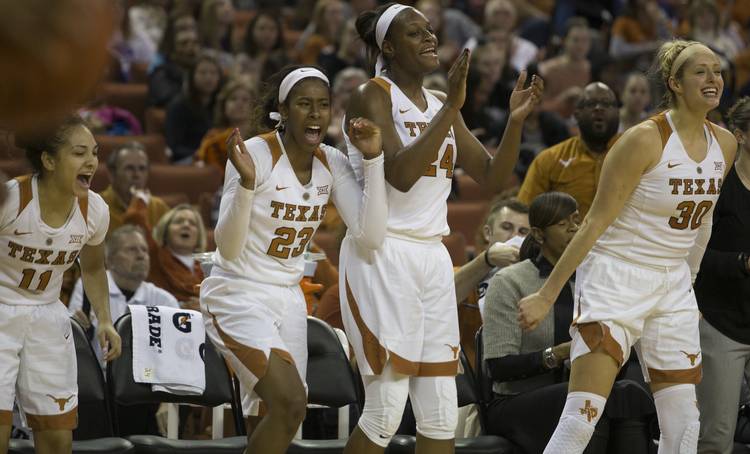 Brooke McCarty (11) and Ariel Atkins (23) are on a national watch list for NCAA women's basketball. (Stephen Spillman / for AMERICAN-STATESMAN)

Senior Texas guards Brooke McCarty and Ariel Atkins have been named to the watch list for the 2018 Citizen Naismith Player of the Year Trophy, which recognizes the nation’s top collegiate women’s basketball player, it was announced Wednesday.

A 30-person midseason team will be released on February 12, 2018. Players who do not make the watch list are eligible for the midseason 30 team.

Atkins, a 2017 First-Team All-Big 12 selection, leads her team with an average of 13.8 points per game and 3.2 steals per game. She also is contributing 4.2 assists per game and boasts a 2.6 assist-to-turnover ratio. She is shooting 73.0 percent from the field this season, which ranks second in the nation, is 8-of-10 from beyond the arc and 7-of-10 from the free-throw line. Additionally, Atkins is averaging 4.2 rebounds per game.

McCarty, the 2017 Big 12 Player of the Year, has played in 110 career games with 89 starts. She leads the Big 12 Conference in assist-to-turnover ratio at 3.1, while also ranking fourth in the league in assists per game at 5.6. McCarty is averaging 13.4 points per game, 2.2 three-pointers per game and 1.6 steals per game. She is playing a squad-best 25.4 minutes per game.

As the NCAA tournament begins, silver is not on Texas’ wish list this December