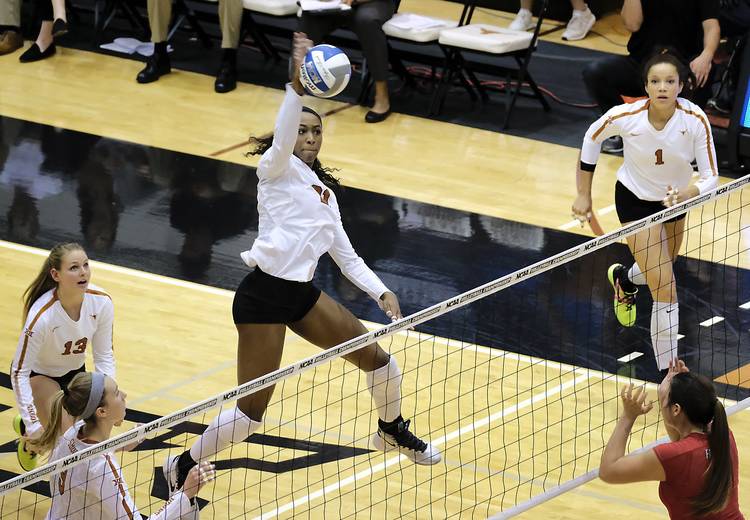 Chiaka Ogbogu was nearly perfect on Friday night. Her team, though, still is.

Texas is making its 34th appearance in the NCAA tournament, and the Longhorns have yet to lose an opener in this showcase. Texas last dropped a set in a postseason opener in 1994.

“We knew Fairfield was going to be tough against us; we knew they were going to battle,” Ogbogu said. “It’s the first game of the NCAA tournament; there’s going to be nerves on both sides. Our communication was just about taking care of what we could take care of.”

Fairfield scored the match’s first point on a kill by Cedar Park native Luci Albertson. Texas, however, trailed only twice in the first set. The Stags kept the opening stanza close and six ties were forged until an 8-0 run gave Texas a 22-14 lead.

Nwanebu recorded three of her four first-set kills during that eight-point sprint, and the 6-4 right-side hitter also assisted on a block. Ogbogu, a senior middle blocker, was perfect on her five swings.

“In the first set, we said right now, we’re playing enough to win the game and not enough to necessarily dominate,” Nwanebu said. “I think that started a little spark in that little moment.”

Texas led by as many as 12 points in the second set. In this third set, sophomore outside hitter Micaya White registered six of her team-high 12 kills.

Texas hit .400 against an undersized line-up that mustered only one block. Ogbogu (.917), Nwanebu (.778), freshman Lexi Sun (.316) and White (.281) all hit above their season-long averages. Freshman Ashley Shook had 33 assists in her postseason debut.

“I think Shook was really collected and calm — well, she appeared that she was — for her first tournament,” Nwanebu said. “Her confidence is really contagious, and it makes the hitters confident. We were able to see the whole court, and with her sets were able to place it where we wanted to.”

Ogbogu also had four blocks, and she is five stuffs away from setting the UT career record for total blocks. The Ogbogu-led defense – which also got eight digs from libero Cat McCoy – limited Fairfield to a .123 hitting percentage. Megan Theiller led the Stags (25-7) with 15 kills.

“We didn’t get the outcome we wanted, but the process wasn’t there and I think that was the biggest fault today,” said senior Skyler Day, whose team won the Metro Atlantic Athletic Conference championship. “We just weren’t at our best, and to beat Texas, you have to be at your best.”