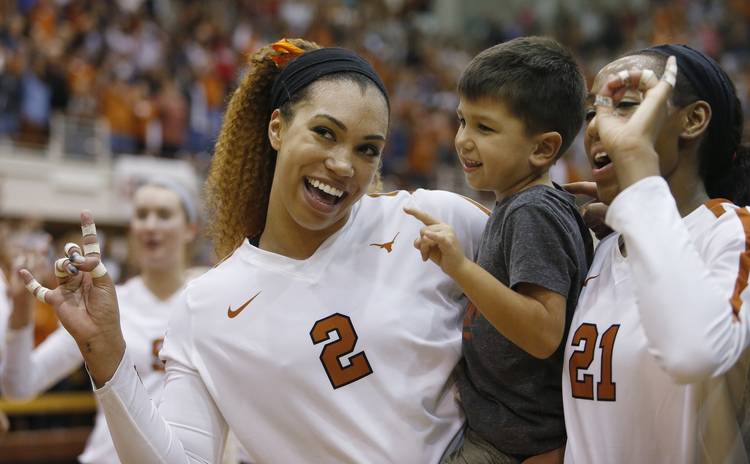 Texas seniors Ebony Nwanebu (2) and Chiaka Ogbogu celebrate a sweep of North Carolina State with Karsen Mendoza, 5, at Gregory Gym on Dec. 2, 2017. Texas advances to the third round of the NCAA tournament with the victory. (Stephen Spillman / for American-Statesman)

Sophomore Micaya White registered 13 kills and junior Morgan Johnson added seven blocks as Texas swept by North Carolina State in the second round of the NCAA tournament. With the 25-18, 25-15, 25-21 triumph at home, Texas advances to the Sweet 16 for the 12th straight year.

“It’s something special to get this far,” Johnson said. “Many teams want to be in our position. I think it keeps us humble to remember that, and it gives us the fire to keep going on.”

North Carolina State then grabbed early leads in the second and third sets. Texas, however, eventually took control of both sets, holding the Wolfpack to .147 and .130 hitting percentages in those sessions.

“We were trying to catch up, if you will, to the speed of the game. Overall, we were doing some really, really nice things… we couldn’t sustain it,” North Carolina State coach Linda Hampton-Keith said. “It just came down to a couple plays here and there, and that’s really what these are all about.”

On Saturday, Texas went on 5-0, 12-3 and 7-1 runs against North Carolina State. One day earlier, Texas pushed a first-set lead against Fairfield to 22-14 after it held a 15-14 advantage at the media timeout.

“The good teams are able to sustain high levels of consistency and put pressure on teams in a variety of ways and make them perform great all the way through the game,” Texas coach Jerritt Elliott said.

The performance of the underclassmen should have been a welcome sight to the announced crowd of 3,902, who bid farewell to UT’s seniors on Saturday. Since Stanford is the top seed in their quadrant of the bracket, Texas must win twice next week at the Cardinal’s Maples Pavilion to advance to the Kansas City-hosted Final Four.

McCoy added 18 digs to her all-time school record. Nwanebu had 12 kills and a .458 hitting percentage. Ogbogu registered nine kills and moved within one block of the total blocks record at Texas (Errica Hibben’s 531).

“Gregory is so special, and our fans and this program, I can just go on and on about how great just coming to UT is,” McCoy said. “Just looking around at those last couple of points, I really got goosebumps.”

North Carolina State (21-12) was led by Melissa Evans’ 11 kills. The Wolfpack were making their first-ever trip to the second round of the NCAA tournament.