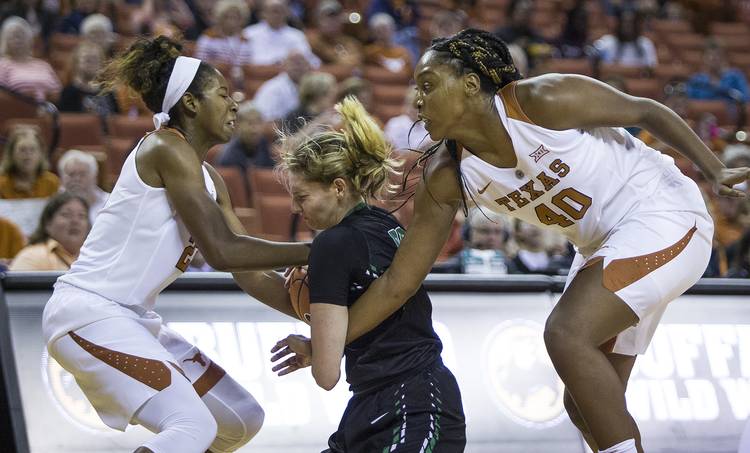 ATHENS, Ga.  — Ariel Atkins had 17 points and nine rebounds, Jatarie White added 13 points and No. 2 Texas cruised to an 81-53 victory over Georgia on Sunday.

Brooke McCarty and Lashann Higgs each scored 12 points as the Longhorns (7-0) dominated on both ends of the floor. Texas’ defense kept the Lady Bulldogs from getting to the rim and from generating any momentum beyond the arc. And the Longhorns had nearly everything working offensively in their half-court sets and fast-break chances.

Mackenzie Engram finished with 17 points and was the only player to score in double figures for Georgia (7-1), which made it to the free-throw line just eight times and shot 17.6 percent on 17 3-point attempts.

Texas was at its best late in the second quarter after Georgia pulled with 10 on Gabby Connally’s layup. Atkins blocked a shot and fed Hosey for a layup. Hosey and Sutton each had a steal and a quick layup as the Longhorns closed the first half on a 9-0 run to lead by 19.

The Longhorns, who lead the nation in scoring, hit seven of their first 11 shots from the field to go up 22-9 at the end of the first quarter. Georgia pulled within seven in the second on Connally’s 3, but the Lady Bulldogs couldn’t overcome having three starters — Caliya Robinson, Que Morrison and Haley Clark — in foul trouble through most of the first half.

Texas: The Longhorns’ roster has plenty of depth, and it’s about to get even better when Joyner Holmes, the 2016 Big 12 freshman of the year, returns to the team on Dec. 23 following an NCAA rules violation that was revealed in July. Holmes averaged 12.1 points and a team-best 8.2 rebounds and played a big role in the Longhorns advancing to a third straight Sweet 16.

Georgia: In their first big game of the season, the Lady Bulldogs got just four points from Robinson, their leading scorer this season, and had a combined 15 points from three other starters. Coach Joni Taylor will use a nearly two-week break to respond to all the weaknesses exposed by Texas. The Lady Bulldogs have five games left before the Southeastern Conference part of the season starts.

Starting 5: Shaka’s old Virginia home and what to expect when expecting Big 12 play