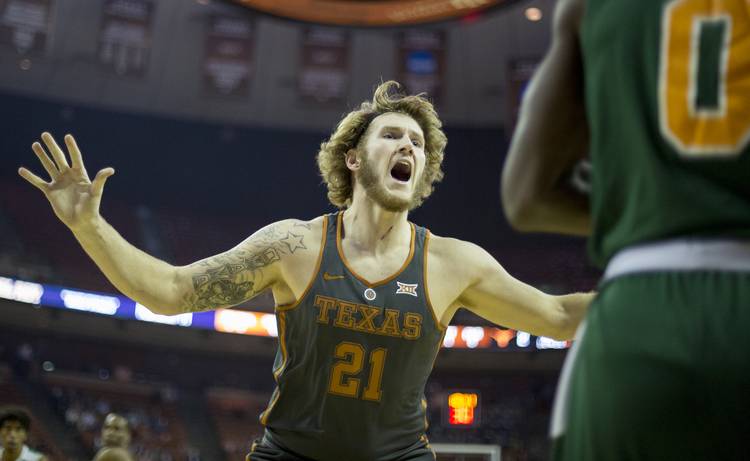 Texas basketball has reached the month of December, let the countdown to Big 12 play begin. Here are five things:

5. Shaka Smart was right to be mad after one half against Florida A&M

Last week Texas played one game against Florida A&M and our reporters, Brian Davis and columnist Kirk Bohls, noticed the Longhorns weren’t in the best of spirits following the 82-58 win.

Well, coach Shaka Smart put it “…  I jumped their ass in the locker room …”

He wasn’t happy, and he shouldn’t have been. Record-wise and reputation-wise, Florida A&M was the worst team Texas had played all season and might all season. The Rattlers were 1-7 entering the game and pretty much all those losses were by double figures. Texas led by double figures throughout the game, but only by 35-26 at halftime and took more than 30 minutes to really pull away.

Shooting 1-for-13 from 3-point range in the first half and 47 percent from the free throw line isn’t going to make any coach happy. Texas played much better in the second half, shooting 75 percent from the field and shooting only six threes and making half of them.

Chalk it up as a learning experience for the Longhorns.

4. Dylan Osetkowski is on pace for an All-Big 12 season

So far Osetkowski looks like the clear front-runner for Big 12 Newcomer of the Year and is playing like a possible first-team All-Big 12. Depending on where voters will slot Vladimir Brodziansky of TCU (center or power forward) and LaGerald Vick of Kansas (guard or forward), Osetkowski sure does look like the top true power forward in the league.

His numbers back him up. He’s averaging 13.6 (scored 19 against Florida A&M) and eight rebounds per game. Osetkowski has scored at least 17 points in three of the Longhorns’ seven games and been in double figures in all but one of the games. He’s also grabbed at least seven rebounds in six of the seven games.

His biggest flaw is the 3-point shooting. He’s 2-of-18 from the field and hasn’t made a long-range shot since the New Hampshire game on Nov. 14. Since then he’s 0-for-11. He’s getting 3-point looks when Texas has played him at the small forward position (or the three position) when Mo Bamba and Jericho Sims are on the floor with him. That line-up puts what looks like Texas’ top three big man on the floor but at the same time it takes Osetkowski away from the post, where he’s showing to be the team’s best rebounder.

Expect Osetkowski to only get better as the season wears on and Texas settles into a rotation.

Texas is tied for the Big 12 lead in blocked shots. That’s not surprising when Mo Bamba is on the floor. He has 24 blocks in six games played. In seven games, Texas is averaging 6.1 blocks per game, tied with West Virginia, who has blocked 49 shots in eight games. Texas has batted away 43 shots.

However, the stat(s) that are most interesting to me are the rebounding numbers. With Bamba, Osetkowski, Sims, Royce Hamm and James Banks, Texas has one of the deepest front courts in the Big 12. On offensive rebounding, that’s showing. Texas is second in the Big 12 with 12.4 offensive rebounds per game. However, Texas is eighth in the league in rebound margin. That said, not a single team in the Big 12 is being out rebounded, on average. Kansas State is last in the league with an even rebounding margin. Texas is +3.

2. League play is nearing, so let’s look at some more league stats

Big 12 play begins on Dec. 29 — three weeks from Friday. Texas plays Kansas at home to tip-off the gauntlet. They Longhorns are on pace to enter the league as one of the elite defenses — like the Longhorns were last season — with the second best 3-point defense and third best field goal defense. We’ve talked about the blocked shots and Texas is +5.1 in turnover margin.

Oh, and Kansas’ defense, against a hoard of mid-major teams along with No. 7 Kentucky and 6-1 Syracuse, has the best field goal defense, limiting teams to 35.4 percent.

My gut feeling is Kansas doesn’t sustain those numbers before conference play starts as the Jayhawks face a handful of Power 5 teams — including ranked Arizona State this weekend — before coming to Austin.

The Longhorns hit the road for the team’s first and only true road game of non-conference play. Texas does play Alabama in Alabama, but not on the Crimson Tide’s campus.

The VCU elevator pitch: One of the best mid-major programs in college basketball, the Rams face their former coach Shaka Smart and are 5-3 on the year with a win over California at the Maui Jim Maui Invitational last month.

So we all know what the storyline is. Smart is the greatest coach in VCU basketball history. He took them to the Final Four in 2011 and scored the program’s biggest win ever in the process as the Rams beat No. 1 seed Kansas in the Elite Eight. There are three seniors on the team and a handful of juniors, so chances are Smart coached, recruited and knows a lot of the players on a program he led just a few years ago.

VCU has five players averaging double figures and a sixth player going for 8.2 points per night. The Rams are led by Justin Tillman (15.5 points per game) and De’Riante Jenkins (14.3 points per game). Tillman was a freshman during Smart’s final year at VCU in 2014-2015. The 6-foot-8-inch forward had a limited role, playing 12.3 minutes a game.

Interesting fact:  VCU coach Mike Rhoades was one of Smart’s top assistants at VCU and left the program to become head coach at Rice before Smart’s final year in Richmond. Despite this being just the third season post Smart, VCU is on its second coach after Will Wade (Smart’s successor) left to take the LSU job this past off-season.

Atkins, White lead No. 2 Texas to easy win over Georgia