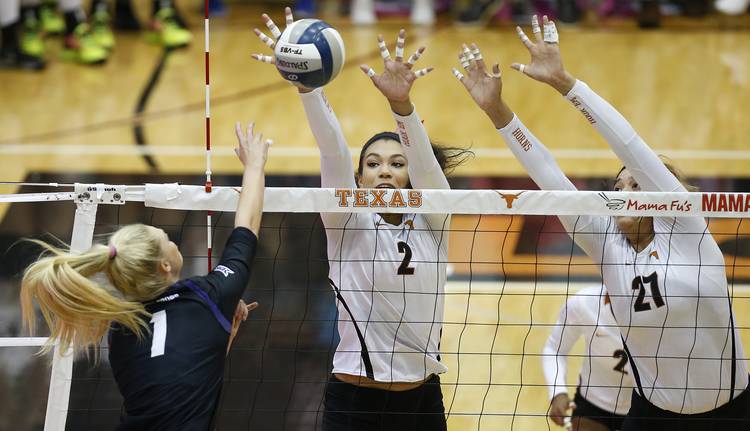 STANFORD, Calif. — Texas players were all in elementary school the last time a Longhorns volleyball team didn’t advance to the regional finals of the NCAA tournament.

That 12-year streak of Sweet 16 wins continued Friday night at the Stanford Regional — by the smallest possible margin.

It was Texas’ 21st straight win. The Longhorns (27-2) had dropped only two sets in the past month before they lost the second and third sets against the Utes (24-10), who were in their first Sweet 16 since 2008.

“That’s what this tournament is about now,” Texas coach Jerritt Elliot said. “It’s been this way the last few years. Last year we were down 11-6 in the fifth set (in the regional semifinals against BYU) and came back. Now we were down 2-1. So it’s a credit to these young women and their determination, and we’re happy to be playing another day.”

Texas will face host and No. 3 seed Stanford (29-3) Saturday (9 p.m., ESPNU) in a rematch of the 2016 NCAA championship match that the Cardinal won in four sets. A win would send Texas to its sixth straight Final Four next week in Kansas City.

“This very easily, if we were one seed off, could be the national championship match tomorrow night,” Elliott said. “And we’re playing in the Elite Eight. There’s no doubt that the matchup we have is the toughest one that is remaining. We knew that coming in, and we’re going to put on the jersey and wear it with pride and get after it.”

Bedart-Ghani, a junior outside hitter, had 12 kills and no attacking errors. Senior Chiaka Ogbogu had a career-high 16 kills and broke a 25-year-old school record for career blocks. Micaya White posted 13 kills and 20 digs for her 10th double-double of the season.

Texas got off to a torrid start, with 16 kills and only two errors in the first set. The Longhorns won the first four points of the match and never led by fewer than five after consecutive aces by Lexi Sun put them up 12-6. But Utah stormed back in the second set, closing it out on a 22-10 run and giving Texas its biggest margin of defeat in a set since the first one of the season, on Aug. 25 against Florida.

After two lopsided sets, the third set was tight, with Utah winning 26-24 after 15 ties and eight lead changes. The Longhorns scored six straight points to go up 7-2 in the fourth set and maintained the advantage to force a final set.

“The tournament is about surviving and advancing,” Elliott said. “Tonight we had a situation where Yazee came off the bench and gave us a huge spark and took some huge swings at the end and give us that victory. My focus right now is to get back, get rested, and get a gameplan together and see if we’re good enough tomorrow night to battle and find a way to win like we did tonight.”