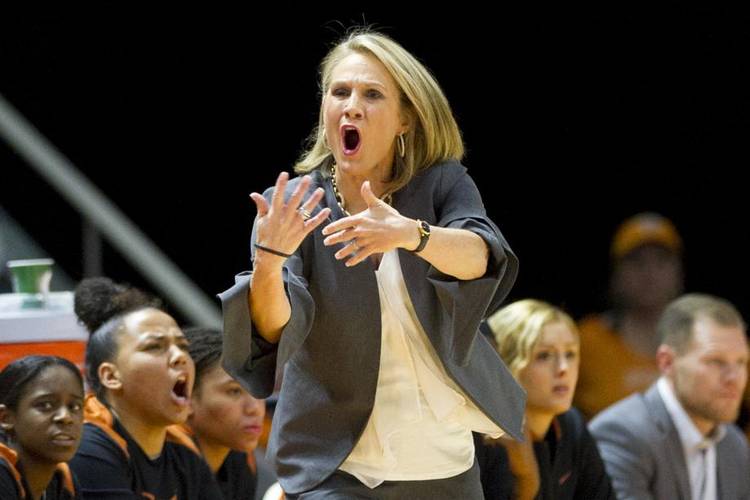 Texas Head Coach Karen Aston calls to her team in the first half of an NCAA college basketball game against Tennessee, Sunday, Dec. 10, 2017, in Knoxville, Tenn. AP Photo/Calvin Mattheis

KNOXVILLE, Tenn. — Jaime Nared and Mercedes Russell both produced double-doubles Sunday as No. 11 Tennessee outlasted No. 2 Texas 82-75 in a physical matchup of unbeaten teams.

Nared collected 23 points and 13 rebounds for the Lady Vols, who never trailed. Russell added 15 points and 12 rebounds to help Tennessee grab its 10th 10-0 start in school history and its second in Holly Warlick’s six seasons as coach.

The Lady Vols also went 10-0 under Warlick in 2013-14 and went on to finish 29-6 that year with an NCAA regional semifinal appearance.

Tennessee maintained a narrow lead throughout the final 19 minutes and overcame some shaky free-throw shooting down the stretch by making nine of its last 11 field-goal attempts.

Jatarie White, Audrey-Ann Caron-Goudreau and Brooke McCarty all fouled out for the Longhorns. Jordan Hosey didn’t return to the game after getting hurt in the third quarter, and Ariel Atkins missed a key stretch of the fourth quarter with an injury. Atkins returned to the game in the last three minutes and scored a team-high 21 points.

A game featuring two of the nation’s highest-scoring teams turned into a defensive struggle in the early going. Tennessee never trailed in the first half and led by as many as 10 while Texas missed 13 of its first 14 shots from the floor.

The Longhorns crept back into the game and got within 29-27 at halftime because Tennessee also struggled to get baskets.

Texas tied it at 29 when Atkins got her first basket of the game in the opening minute of the third quarter, but Westbrook sank a 3-pointer on the Lady Vols’ next trip down the floor to spark a 7-0 Tennessee run.

Tennessee stayed ahead the rest of the way, though Texas kept it close throughout.

Texas: The Longhorns fell behind early because their leading scorers this season — McCarty and Atkins — each scored just two points in the first half while shooting a combined 1 of 11 from the floor. Atkins played much better the rest of the way and scored 19 second-half points, but McCarty never got going. McCarty scored eight points and shot 2 of 14, including 0-for-6 from 3-point range.

Tennessee: After playing seven of its first 10 games at home without a true road game, the Lady Vols won’t be returning to Thompson-Boling Arena for 3 ½ weeks. Tennessee has road games Dec. 17 at Long Beach State, Dec. 21 at No. 18 Stanford and Dec. 31 at No. 20 Kentucky before hosting Auburn on Jan. 4.

Tennessee is at Long Beach State on Sunday.

Stanford ends Texas’ season for the second straight year, one match short of the Final Four