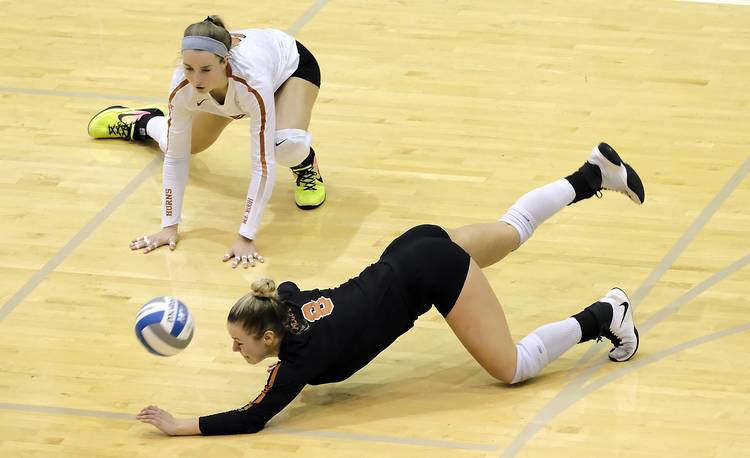 Texas Cat McCoy (8) comes up short on a dig as Ashley Shook (9) looks on during the second match against Fairfield in the NCAA First Round college volleyball game, Friday Dec.1,2017, in AUSTIN, Texas. Texas swept Fairfield, 25-16, 25-18, 25-17, advancing to the Second Round and will face NC State. (AUSTIN AMERICAN-STATESMAN Photo/Rodolfo Gonzalez)

STANFORD, Calif. — Texas welcomed back Chiaka Ogbogu, the Big 12’s player of the year who missed last season for academic reasons, and added Lexi Sun, the No. 1-ranked recruit in the country.

It still wasn’t enough to get past Stanford.

In a rematch of last year’s NCAA championship match won by the Cardinal in four sets, No. 3 Stanford swept No. 6 Texas 25-21, 25-21, 25-21 in the NCAA tournament regional finals at Stanford’s Maples Pavilion.

It was the Longhorns’ first loss in three months, and it snapped two significant streaks — Texas had won 21 matches in a row and had made five straight appearances in the Final Four.

“It just felt like we could never get our serve and pass game going at a high level,” Texas coach Jerritt Elliott said. “And when we did, we were able to score, but we couldn’t do it for long periods of time, and that’s the name of the game — you have to serve and pass.”

The Longhorns (27-3) and Cardinal (30-3) returned the vast majority of their rosters from last season, setting up a highly-anticipated regional final. But after scoring the first five points of the match, Texas was never able to muster much momentum.

After hitting .207 and .231 in the first two sets, the Longhorns raised their hitting percentage to .316 in the third – only to see Stanford hit .436 in the final frame to close out the match.

“We passed far below the standard of what it takes to be great,” Elliott said. “Our numbers were really good siding out when we were passing, but our touches and our inability to control the ball was the reason the wheels came falling off.”

While Stanford relied on Pac-12 player of the year Kathryn Plummer (who had 19 kills), Texas had a more balanced attack led by Ashley Shook (36 assists). Sophomore Micaya White had 10 kills and 13 digs, senior Ebony Nwanebu had eight kills, Ogbogu had seven kills and three blocks and junior Morgan Johnson had six kills and no errors in 10 attempts.

Still, Texas found itself playing from behind in all three sets — the latest lead it had in a set was at 13-12.

The Longhorns came back from down two sets to one Friday night against Utah in the regional semifinals — winning 16-14 in the fifth set — behind reserve Yaazie Bedart-Ghani, who played for the first time in a month and had 12 kills and no errors. But there was no savior off the bench and no stirring comeback Saturday.

“We had a whole bunch of talent on this team. Probably the most talent physically that we’ve had at Texas from top to bottom,” said Elliott, who has led Texas for 17 seasons. “But unfortunately it happens sometimes that you can trip up and not have a great match, and that’s what happened tonight. But credit Stanford, they were a big part of that.”