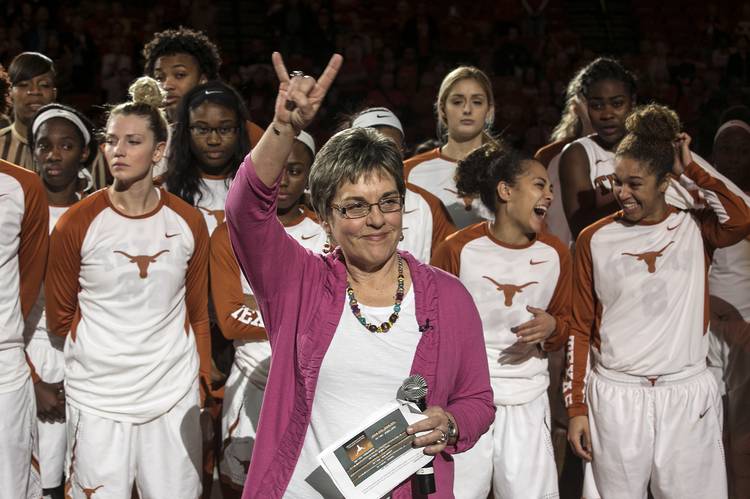 He praised her in a closed-door meeting with UT coaches, two sources said. Then he called her a “star” during his introductory press conference.

“C.P., you’ve always been here,” Del Conte said to Plonsky. “I love our relationship. I love what you’ve done for the University of Texas. I can’t wait to get started to work with you on a daily basis.”

Del Conte’s official title is vice president for intercollegiate athletics. But as Texas’ athletic director, he has final say over men’s and women’s sports. It’s a defining moment: Texas was the last remaining athletic program in the country that still had separate men’s and women’s ADs.

Tennessee, the second-to-last school, merged their men’s and women’s athletic departments in 2011. The school’s longtime women’s AD Joan Cronan stayed in her role until 2012. In June, ESPN counted only 19 women serving as athletic directors or conference commissioners throughout college athletics.

Plonsky, 59, has held the women’s AD title at Texas since September 2001. Over the last 16 years, UT women’s sports have thrived, winning three national titles and 58 conference titles. She has served on just about every committee imaginable and was the president of the National Association of Collegiate Directors of Athletics for 2016-17.

Among college administrators, Plonsky is a legend, the same as longtime UT men’s athletic director DeLoss Dodds. She oversees UT’s revenue generation, marketing and licensing and the school’s partnership with TV and radio networks; she was instrumental in the 2011 Texas/ESPN venture that created the Longhorn Network.

Still, Texas President Gregory L. Fenves wanted to stack the athletic department’s leadership structure in the same way he does other departments on campus. “I want to have single lines of decision-making and accountability at the president’s level,” Fenves said.

Technically, Del Conte is Plonsky’s boss. In practical matters, there may be no noticeable change from a day-to-day basis, school officials said.

“I’m excited. Everybody is super excited,” women’s basketball coach Karen Aston said. “Chris Plonsky seems incredibly excited. If I thought this was a negative thing for women’s athletics or  negative across the board at our university, I didn’t get any kind of disappointment there was anything like that.

“I haven’t seen her this excited in a long time. I think it’s going to be a great partnership.”

On Monday, Del Conte said, “There are no changes. Chris Plonsky is a star. I absolutely adore her. We’re going to have the relationship of working together.

It’s possible the biggest change in Plonsky’s job could simply boil down to coaching contracts. For example, she approved a new contract for volleyball coach Jerritt Elliott last month. But softball coach Connie Clark is going into the final year of her deal.

“Nobody does things in a vacuum,” Plonsky said. “It’s always been a ‘we.’ Despite how it looks for titles, it’s never been an ‘I’m doing this’ decision. No matter whether it’s a hire within the department or a coach, it’s always been collaborative.”

Plonsky said this sort of organizational structure “is our future.”

“This is ironic. Since ’93, I’ve always reported to the men’s AD here. Now that was for the other pieces of my job, like the revenue pieces which I’m still doing,” Plonsky said Monday. “Women’s athletics, I report to the president. But he’s vice-president, and this is our future.”

Plonsky said UT is facing serious challenges ahead. The tax bill winding its way through Congress eliminates tax breaks for seat donations at various events, a change that could warp current donor behavior. College Football Playoff officials will eventually begin talks about expanding the four-team format or standing pat. The NCAA also faces all manner of litigation, too.

“We will have a working relationship together,” Del Conte said. “Who do you serve? You serve coaches and student-athletes, period. That should be the responsibility of all of us, right? That is taught by DeLoss. There’s no one or the other, it’s the University of Texas first and foremost.

“When you get to know me, spend time with me, you’ll realize I have two daughters, a wife, three cats. They’re all women,” he said. “At the end of the day, it’s about the university, what’s right for the university.”

Chris Del Conte inherits a successful women’s athletic program at Texas — all nine teams are coming off postseason appearances, and five made it to the NCAA championships. In fact, over the past 16 years, UT women’s teams have combined for three national titles and 58 Big 12 crowns. A snapshot of each program:

Basketball: 7-1, ranked 8th in the country, Four Sweet 16s and one Elite Eight the last 4 years

Volleyball: Went 27-3, advanced to the regional final; made NCAA Final Fours in 5 of the last 6 years

Softball: 33-26 last year, hasn’t finished higher than third in the Big 12 or gotten out of regionals since 2013

Golf: Ranked in the Top 20 last season, finished 18th at the NCAA championships

Soccer: Went 14-4-3 in 2017, advanced to the third round of the NCAA tournament, and finished ranked 14th nationally

Swimming/diving: Ranked No. 2 in the country, placed 5th at the 2017 NCAA championships

Tennis: Went 14-9 last season, advanced to the second round of the NCAA tournament

Rowing: Finished 4th at NCAA championships in May (best program finish ever)