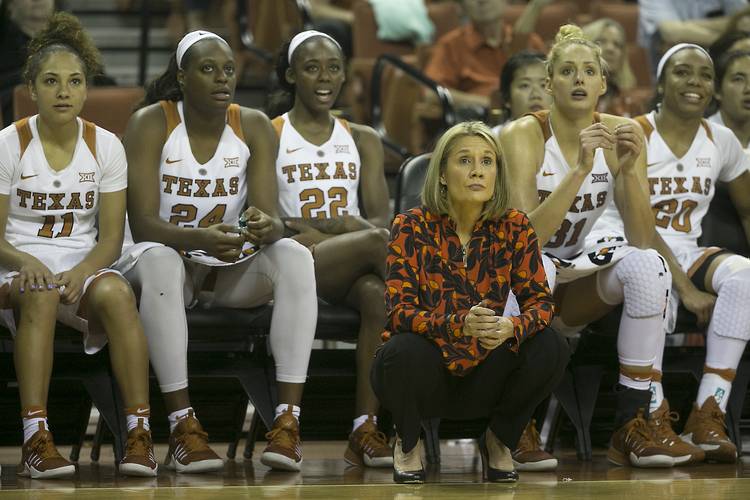 Karen Aston coaches a Texas team that is highly ranked, loaded with talent and capable of making a splash during the NCAA Tournament.

And yet suddenly, Aston has issues. One of her two best players, senior guard Brooke McCarty, has a left hip injury of unknown origin. And for about a week, the Longhorns have experienced what Aston calls “a lull.”

There is at least one exception, though: Aston’s other best player — Ariel Atkins.

Atkins had 13 points, seven rebounds and three steals in only 21 minutes as the No. 8 Longhorns beat Northwestern State 68-44 on Wednesday night at the Erwin Center.

The senior guard converted all six of her shots from the field for the Longhorns (8-1).

But McCarty, reigning Big 12 player of the year, sat out with an injury that Aston said has been lingering. McCarty hit 2 of 15 shots during a loss at Tennessee on Sunday.

Now McCarty’s status is questionable for the Longhorns’ game on Sunday against No. 12 Florida State, which tips at 11:30 a.m. CT in the Erwin Center.

As for that lull, Aston said it began about a week ago in practice and manifested at Tennessee. That condition won’t work with Florida State coming up and Big 12 competition set to begin later in December.

“We’ve got to figure out how to flip the switch again and have a little more urgency,” Aston said.

Atkins believes these things tend to happen in December while players are studying for and taking final exams. Younger players seem to be affected most, Atkins said.

“We’re a young team, and unfortunately we don’t know how to bounce back when something kind of hits us,” Atkins said.

Lady Demons coach Jordan Dupuy said his team accomplished something against the Longhorns. One goal was to limit Texas to fewer than 80 points by controlling the tempo. Before Wednesday, the Longhorns averaged 90.8.

“Good implementation of our game plan,” Dupuy said. “I don’t believe in a lot of moral victories, but there are a lot of positives we can pull from that.”

Aston detects positives as well, just not as many as she would like.

“I definitely think that our team has a bit of a hangover from the Sunday loss,” Aston said. “Going back to Tennessee, as I looked at it on film, it was a collective poor performance, including coaching.”

Watching McCarty struggle did not help.

“I don’t want to say shock,” Aston said. “But it was an adjustment to have a game that we have not experienced this year where Brooke isn’t making shots and isn’t making plays.”

Tommy Nobis: ‘He was our hero. Our one great player’