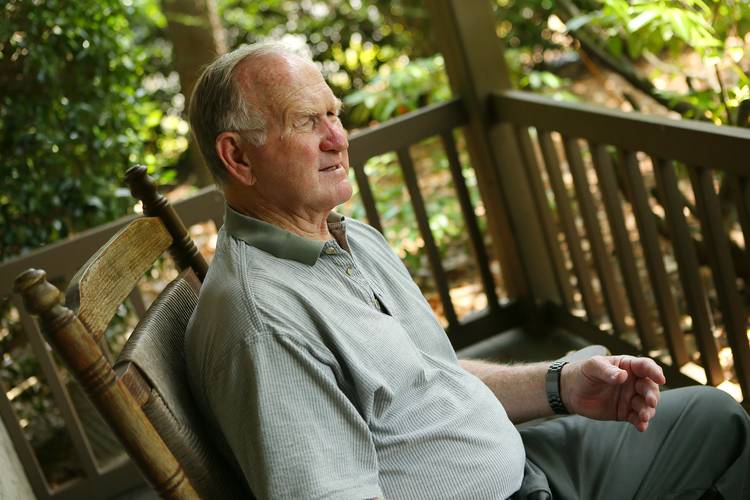 Mr. Falcon, the first-ever draft pick for the franchise in 1966, Tommy Nobis recalls his career in the trenches from the front porch of the family home on Thursday, June 13, 2013, in Sandy Springs. CURTIS COMPTON / CCOMPTON@AJC.COM

Someone had to be the first Falcon, the Adam in the Genesis story of professional football in the South, at a time when Atlanta certainly was no earthly paradise for a middle linebacker.

Someone had to show a city how this NFL game was supposed to be played, to be the hammer in the otherwise empty new tool belt. Someone had to distinguish himself in an undistinguished time.

That man was Tommy Nobis, a solid name that fit this Texan with the square-cut jaw straight out of a black-and-white Western. Nobis died quietly at his Sandy Springs, Ga. home Wednesday morning after a long and draining battle with dementia and its associated health issues. He was 74.

“He was our hero. Our one great player,” said Taylor Smith, just a teenager when his father, Rankin, birthed the expansion Falcons in 1966 and made a flinty defender out of Texas the franchise’s first draft pick.

It was the Falcons’ first coup when they signed Nobis. The Outland Trophy and Maxwell Award winner was in high demand at a time when two leagues competed for collegians. “The Best Defender in College Football,” read the cover of Sports Illustrated in October 1965, with Nobis striking a fearsome pose beneath.

Such a talent was Nobis that astronauts invoked his name in space — “Tell Nobis to sign with Houston (Oilers, of the old AFL),” Frank Borman relayed from Gemini 7 in 1965.

But this San Antonio-born all-around athlete — also an offensive lineman at Texas, Nobis was called “finest two-way player I’ve ever seen,” by Longhorns coach Darrell Royal — was determined to play on the biggest stage possible. Even if that meant laboring in relative obscurity and with little hope of sustained victory with a new outfit called the Falcons.

The Falcons would win precious few games over the 11-year stretch of Nobis career. In fact, they lost twice as much as they won (50-100-1 from 1966-76) and never tasted the postseason.

On the 3-11 Falcons of 1966, Nobis was the league’s defensive rookie of the year and made the first of his five Pro Bowls. That season he was credited with an unofficial but staggering 294 tackles during a 14-game season. A pair of knee injuries would slow him drastically, but never rob Nobis of his competitive fire.

PHOTOS: Tommy Nobis through the years

“I played on some teams that just didn’t have a chance to win,” Nobis said during a 2013 interview. “I never would admit that, even after a season was over, that our butt was beat before we ever lined up against this team or that team.”

Over that time, though the trials of injury and defeat, Nobis unfailingly wore the face of the new franchise. “Mr. Falcon,” he was called almost from the beginning, a title he took with him to his death.

“(The Falcons) meant everything to him,” said one of Nobis’ three children, Tommy. “That was his life, the Falcons were his team. Even later when he was in the front office and it was game day, you felt like he was going to play, he was so fired up.”

“He relished the role of being ‘Mr. Falcon,’ and he realized how important that was,” Smith said.

Nobis left his mark with his sideline-to-sideline pursuit of the ball (the knee injuries eventually cut into that) and the ability to bring running backs to a sudden, jolting halt.

Brezina credits Nobis with the hardest hit he’s ever witnessed, dropping a charging fullback who fell backward as if a safe had fallen on the poor man from a great height. This after Nobis had shed a blocker as easily as taking off a sweater.

Former Falcons running back Harmon Wages recalled as a rookie telling Nobis, “If I’m going to play on Sunday, you’ve got to quit whipping my ass (in practice).”

“He had the innate ability as a linebacker that when he hit you, he had that little extra oomph in his tackle,” said former Falcons receiver Ken Burrow (1971-75). “The guy always got stopped then-and-there or he was driven backwards. He had explosive power.”

The role of “Mr. Falcon” also extended to beyond the field, from his initial work with Special Olympics to the establishment of the Nobis Works Foundation, which provides vocational support and employment to people with disabilities.

“He taught me how to give to people,” Brezina said.

Tellingly, and much to the dismay of his family, fans and friends, he is not in Pro Football’s Hall of Fame.

“It’s an injustice to football to leave him out of the Hall of Fame. He did his job beyond measure,” Brezina said.

Earning an almost familial loyalty from Rankin Smith, Nobis would remain close to the Falcons after retirement, serving in a variety of front-office positions. “My dad loved him more than the football team itself, I think,” Taylor Smith said. When Smith sold to Arthur Blank in 2002, Nobis had no role in the new regime.

A party to the class-action concussion lawsuit brought against the NFL, Nobis was diagnosed with cognitive issues in his late 60s.

“It has been a long process,” his wife, Lynn, said. “He has been in pain for a long time. He’s not in pain anymore, and I’m so glad for that. He was such a good man, and he wouldn’t have wanted to be like he was.”

Otherwise, he had the limp and the scars of a football player who only knew one way to play. “You could tell he hurt,” said his son, Tommy, “but he was a tough guy, so he went on with his business and didn’t talk about it much.”

“And if he had to do it all over again,” he son said, “I think he would have done it gladly.”

“I know what the Falcons meant to him – they were his family,” Lynn Nobis said.