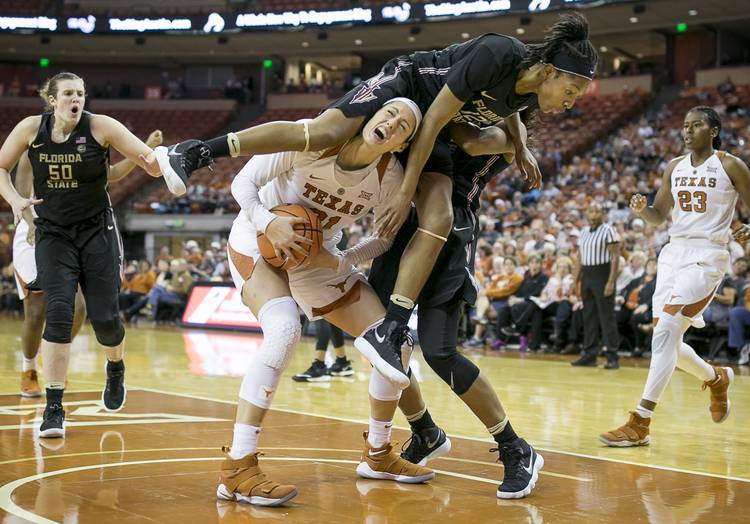 Florida State's Nicki Ekhomu lands on top of UT's Audrey-Ann Caron-Goudreau in the second half of UT's win Sunday at the Erwin Center. JAY JANNER / AMERICAN-STATESMAN

There must be something about Florida State that brings out the best in Texas guard Brooke McCarty.

On Sunday, the Longhorn senior scored a season-high 24 points as No. 8 Texas outlasted No. 12 Florida State 87-72 at the Erwin Center.

This was the last nonconference game for the Longhorns (9-1) before they open Big 12 competition Dec. 28 at Oklahoma.

If McCarty, who was listed as questionable for Sunday’s game with a minor hip injury, was a step slow, the Seminoles didn’t notice. The Big 12 player of the year connected on 10 of 13 shots, made 3 of 4 from behind the 3-point arc, had a team-high six assists and pulled down three rebounds.

In last season’s Texas-FSU game in Tallahassee, McCarty had a career-high 29 points in a 92-88 double-overtime victory.

Karen Aston noted that McCarty had plenty of support from her friends. Ariel Atkins had 17 points and eight rebounds, Lashann Higgs had 15 points and four rebounds, and Jatarie White had her first double-double at Texas with 10 points and 12 rebounds.

“We can do anything we want to do once we set our minds to it,” Aston said.

One week after losing at Tennessee, UT’s lone loss of the nonconference schedule, the Longhorns played one of their best games of the season to knock off the previously unbeaten Seminoles. Most notably, Texas earned a 46-32 rebounding edge, an astonishing fact given FSU (10-1) ranked No. 3 in the country (out of 345 teams) in rebounding margin.

FSU coach Sue Semrau did not appear surprised that Texas owned the boards.

“Texas out-physicaled us; they out-toughed us,” she said. “We needed to be exposed. When you believe you’re third in the nation, you can do that against some teams, not against a team like Texas. … One of the reasons we didn’t rebound well offensively is because we had to respect their transition game. If we had sent four to the boards, they’d get a long outlet (pass), and that hurts us. So we opted only to send three to the boards.”

With both teams hitting from long range, momentum shifted for good on a defensive play by Higgs midway through the third quarter. FSU had the ball in a 54-54 deadlock when Higgs batted away an inbounds pass and drove for a layup to give the Longhorns the lead.

Higgs’ steal and bucket ignited a 9-2 scoring run for the Longhorns to close the third quarter. Texas lead 63-56 after three quarters and was not threatened after that.

“I’m excited anytime I can get a stop for my team,” Higgs said.

In perhaps the wildest first quarter of the season, the Seminoles used that hot start to jump out to a 21-10 lead, UT’s largest deficit of the season. But McCarty hit a pair of 3-pointers, and Higgs drove the lane for layups to help the Longhorns finish on a 16-2 run over the final four minutes to take a 26-23 lead at the first break.

Aston said this was a key victory because it’s natural for a team to have its “confidence rocked a little” after a loss and “you start to question yourself. You need to have a reset button to make sure you don’t let one loss turn into two.

“What I’m most proud about is that we didn’t let the Tennessee loss turn into a weeklong funk that we couldn’t get out of. I thought this might be a real telling tale about the personality of our team.”