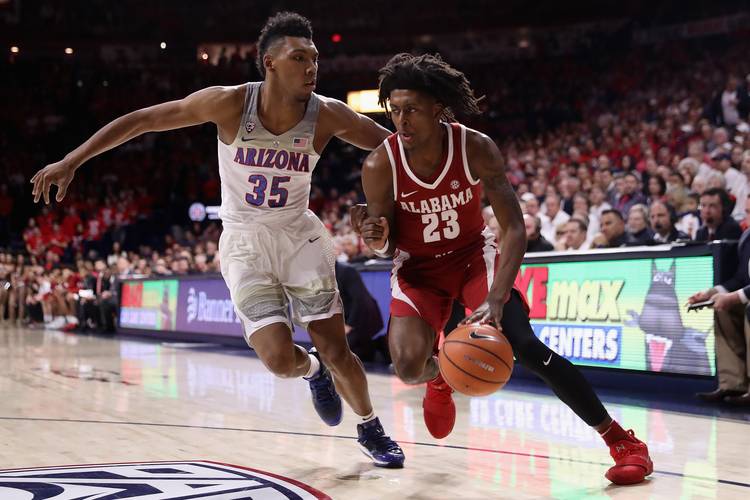 TUCSON, AZ - DECEMBER 09: John Petty #23 of the Alabama Crimson Tide drives the ball past Allonzo Trier #35 of the Arizona Wildcats during the first half of the college basketball game at McKale Center on December 9, 2017 in Tucson, Arizona. (Photo by Christian Petersen/Getty Images)

A pair of teams from the deep south are on the schedule for the Longhorns this week. Here are five things:

Texas played its worst game of the season against Michigan last week. Some of the players looked passive, the offense struggled mightily and Texas lost to Michigan 59-53 at home. The loss makes Texas 0-3 against the Wolverines under Shaka Smart.

It’s tough to press the panic button after this one, although some might. Texas was playing its first game without leading scorer Andrew Jones, and it showed. Jones could be out the rest of the month, though there are hopes he returns by Dec. 29, the Big 12 opener against Kansas at home. The loss just exposed what Smart and others pointed out when the team was winning big but not playing well. It all came to a head against Michigan. Missed free throws, poor execution, it was there.

The Bulldogs gave the Longhorns a bit of scare in the second half on Saturday. Texas led by double-digits at halftime, but saw Louisiana Tech cut the score to just four points with less than 10 minutes to play. Texas’ talented freshman duo of Mo Bamba and Matt Coleman battled through foul troubles, and Daquan Bracey had a big day with 24 points.

In the end, Texas pulled away from the out-gunned Bulldogs and won 75-60 in front of just 8,828 fans — a little more than half full.

3. Texas has talent, people should want to go to the games

Here at Club Erwin for today's tilt vs. La. Tech. This crowd is straight-up embarrassing.

Here are the recorded attendance at each home game this season per Texas athletics website:

OK, I get that those teams don’t have the same sexiness as Kansas (14,111 last season) but a half-filled basketball arena to see a team that puts a future NBA lottery pick on the court and plays an up-tempo style and pressing defense can’t get more people to the Erwin Center? Our own Brian Davis is right that the attendance is embarrassing, and it looks even worse on television.

How to fix it?

So here’s what Brian tweeted:

The best (only?) marketing Texas has done all year was the #ThisIsTexas push in August, and that idea came out of Moncrief. https://t.co/Kh2j6z3ZmA

There are valid excuses: Students were coming off exams, bad non-conference home schedule and the arena is too big (a lame excuse in my opinion). A handful of these games were played last month, with football on the road, so exams aren’t a good excuse. The arena is what it is, and Texas is preparing to build a new one and has a guy in charge with some experience in upgrading facilities.

I think the bottom line is Texas can do a better job selling this program to the locals, but at the same time, Texas has to help itself out by winning the big ones at home — like they’ve done in the past. The turnout of Saturday’s game was predictable after the way Texas played against Michigan a few days earlier combined with who they were about to play that day.

The Longhorns start the week off early with a Monday night tilt.

The Tennessee State elevator pitch: The Tigers are 5-4 and coming off a road loss to North Carolina A&T 64-54 and are 1-1 in overtime games.

The Tigers have a mixed bag. They opened the season as a team some thought could compete for a conference title, then lost 92-56 in Allen Fieldhouse against Kansas and lost three more times to other small mid-major programs. A loss at home to Middle Tennessee State is not a bad loss. A loss at home to Lipscomb (not a terrible team) is not great — even if that loss came in overtime. Clearly Tennessee State is a middle of the road mid-major team.

Delano Spencer leads the team in scoring with 15.7 per game with Christian Mekowulu following him with 11.4 points.

Interesting note: Dana Ford was the Ohio Valley Conference coach of the year in 2016 as his team won 20 games that season. Ford was the youngest coach in college basketball the last three seasons and is still just 33 years old! In that respect he shares a connection with Smart, who was one of the youngest head coaches in college basketball when he landed his first job at VCU in 2009 at the age of 32.

Like Smart (who was an assistant under coach Billy Donovan at Florida), Ford worked for one of the best coaches in college basketball before landing this job: Wichita State coach Gregg Marshall.

The last game before Big 12 season is against a team with one of the best guards in America.

The Alabama elevator pitch: The Crimson Tide are expected to compete for the Southeastern Conference title this season as their fabulous freshman guard Collin Sexton averages 21.8 points per game.

Looking at the Big 12 and the amount of awesome guards Texas will play over the next few months, facing Sexton is a good primer. Texas already played Duke freshman Trevon Duval, but Sexton is a tad better. He’s shooting 47.1 percent from 3-point range and has the same percentage from the field as a whole. Sexton is a likely lottery pick and one of the favorites to win SEC Player of the Year.

All that said, Alabama, a popular dark horse entering the season has fallen a little flat so far. After spending some time in the rankings, Alabama famously lost one game with just three available players, but also lost to Central Florida (ironically on the same day as the college football playoff announcement, where the football team (with one loss) was selected over UCF’s football team (who is undefeated). No one is going to fault Alabama losing to Arizona in the desert.

Alabama is coached by Avery Johnson, the Little General. Johnson is a beloved former San Antonio Spur who once coached the Dallas Mavericks to the NBA Finals.

Some like opponents: For the second game in a row, Texas will play a team that also faced Lipscomb. Texas beat the Bison 80-57 after a slow start. The Crimson Tide won 86-64. A few weeks later, Louisiana Tech nearly knocked off Alabama in Tuscaloosa before the Tide turned (pun intended) and Alabama won 77-74. Do with that what you will.

Interesting fact: Texas and Alabama will play this game in Birmingham, Ala., so this isn’t going to be considered a true a road game for the Longhorns, who have played just one of those this season. It’s tough to criticize that type of scheduling when most of the league (and major conference teams) do it. Last season Texas played Alabama at home.

This actually isn’t that uncommon. Some times teams need to play “neutral court” games that are really home games like this so they can use that specific arena as an NCAA Tournament venue and be named the “host” program. It’s one of the reasons why Kansas plays one home game a year at the Sprint Center.

However, that doesn’t apply here. Birmingham isn’t hosting any first- or second-round games this season. This is probably being played in Birmingham because students are on Christmas break, and it makes more sense to play this game off campus.