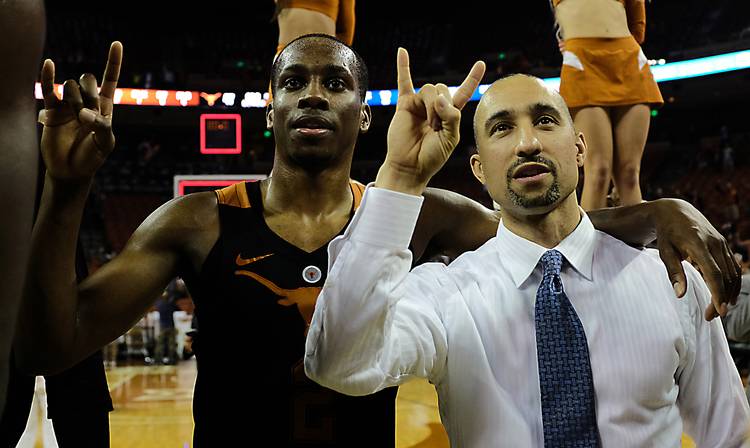 Texas picked up its best win of the year on Friday – one week before the biggest game of the season so far. Here are five things:

It’s not how you start the week; it’s how you finish the week.

After a less than impressive showing against Tennessee State, a 47-46 win, on Monday (hey, the Longhorns still won!), Texas went on the road Friday and played one of its best games of the season, beating Alabama 66-50 in Birmingham. The win featured the best performance yet by freshman Mo Bamba, who scored 17 points, went 7-of-10 from the field, grabbed 11 rebounds and blocked six shots.

It also featured the best final minutes of a game against a quality team Texas has had. The Longhorns’ 12-0 run late in the game proved to be the difference.

Alabama was ranked earlier this season and started the year viewed by many as a squad that could challenge for the Southeastern Conference crown. It could still happen, even though Alabama has underwhelmed at times, but it would be a letdown for that fan base if the Crimson Tide didn’t make the tournament this season. Thus this is Texas’ third win over a quality opponent (Butler, which is 10-3, and VCU, which is 8-5, are the other two) and its only win over a quality opponent from a Power Five conference.

This is Texas’ best win of the non-conference season.

4. Texas might have sent a message to the Big 12

Texas is about to enter a league that’s as loaded at guard as any in the country. The favorite to win the national player of the year award is a point guard from Oklahoma named Trae Young. Jevon Carter, Devonte’ Graham, Manu Lecomte and Jaylen Fisher are a few more guards to watch. Texas Tech (Keenan Evans), Kansas State (Kamau Stokes ) and Iowa State (Lindell Wigginton) have great guards as well.

Alabama’s Collin Sexton is expected to be a better pro then all of those guys and was one of the top guard prospects in college basketball entering the season.

Texas held him to eight points and four assists in 32 minutes.

A lot can be said about the dreadfulness of Texas’ offense, but there’s no denying this is one of the best defenses Texas has ever had on the Forty Acres. KenPom has it as the No. 2 team starting the week in adjusted defensive efficiency, behind only Virginia’s pack-line defense. The Longhorns’ combination of the diamond presses and lockdown half-court defense is the best in the Big 12. While Oklahoma (No. 1) TCU and Kansas ( both No. 12) boast top 20 offenses in both raw numbers and KenPom’s adjusted offensive effciency ranking, neither of those teams has played defenses like Texas’ so far.

Who has? West Virginia, itself the No. 12-ranked defense by KenPom, have played Virginia (and won) and the No. 3 defense in Texas A&M.

3. Texas’ MVP of the non-conference season

This is not even close. Osetkowski averages 14.6 points, 7.8 rebounds and shoots 45 percent from the field. Bamba is the biggest potential star, Andrew Jones is the biggest difference maker on offense, but Osetkowski , who is carrying on the great legacy of Texas power forwards, is the most consistent and do-it-all guy on the team.

Texas plays Kansas on Dec. 29, but don’t think it’s a game against Kansas and then Texas gets a breather. They play the Jayhawks on Friday, then turnaround and travel to Ames for a tilt with Iowa State for Big Monday on Jan. 1. The third game is in Waco against Baylor followed by a Jan. 10 matchup at home against currently undefeated TCU.

Texas is the first team that gets a crack at (best Ric Flair voice impression) the 13-time reigning Big 12 champions.

The Kansas elevator pitch: The preseason No. 4 team in the nation started the season 7-0 before losing back-to-back games and dropping out of the top 10. Since it’s one bad week, Kansas has won three straight games (two away from Allen Fieldhouse). They have been playing with seven scholarship players for most of the year, but could have as many as 10 by Friday.

The story of the Jayhawks’ season has been guards and lack of players. Kansas may have three of the league’s top 15 guards in Graham, Lagerald Vick and Svi Mykhailiuk. A fourth guard, Malik Newman, is probably Kansas’ biggest disappointment so far considering the hype the former top-10 prospect turned Kansas transfer had entering the season. Kansas plays all four with monster center Udoka Azubuike down low.

The starting five for Kansas scores almost all the points for an offense that is ranked No. 16 at KenPom (overall, Kansas is No. 6 in the KenPom rankings, highest in the Big 12). The starting lineup plays pretty much the whole game and yet Kansas still has the ninth-ranked defense in KenPom. The Jayhawks have played the third-toughest schedule of the Big 12 (Texas overtook Kansas in this aspect, jumping to No. 81 overall and tops in the Big 12 following their game against Alabama. Oklahoma is 106th nationally, one spot ahead of Kansas).

The starting five is really good at Kansas, but it has been overshadowed because of the roster’s flaws. Hall of Fame coach Bill Self has been dogged by questions of Billy Preston’s eligibility status since the start of the regular season. Then in November news broke that Kansas may be getting the 247 Sports composite ranking’s No. 29 player of the 2018 class, Silvio De Sousa, early. Since then questions of the two players’ status have become staples of every Self interview– even when the team is doing charity work.

De Sousa, a 6-foot-9-inch, 230-pound forward originally from Angola, is joining the Jayhawks on Dec. 26 and can practice with the team. At that point it’ll be a matter of how quick the NCAA certifies him in time for Friday’s game against the Longhorns. De Sousa was playing high school basketball last weekend, the thought of him coming in and making a huge impact is more fantasy than reality.

Preston on the other hand is different. He hasn’t been ruled ineligible by Kansas or the NCAA, Kansas has just been holding him out while looking into a fishy car situation. Self indicated last week he’s hopeful Preston will be back by Big 12 play, but it’s tough to gauge  even by reading his comments because they are so vague. Preston has been practicing with the team all season and is a former top-20 recruit and McDonald’s All-American. The 6-foot-10-inch power forward, if cleared by Friday, solves a lot of problems in Lawrence with the depth and front court help he provides.

However, the biggest problem, as I wrote about a few weeks ago is something I don’t think he’ll solve. Kansas doesn’t go to the free throw line a lot (just 27 times during the last three games), which means the extra points a Bill Self team always gets at the stripe aren’t coming. The guards aren’t attacking the basket, and that’s why Self calls the team soft. It isn’t really a defense thing, at least from what I can tell.

Interesting fact: Bill Self is the first active Big 12 coach to also be a Hall of Famer. He was inducted in September. He and Roy Williams are the only two coaches in the Hall of Fame who coached in the Big 12 — both at Kansas with Self replacing Williams. Williams was inducted in 2007, but he was and still is the North Carolina coach. Who will join Self and Williams in the hall? Lon Kruger and Bob Huggins are a national championship away from being a no-brainer. Eddie Sutton, the great Oklahoma State coach, is nominated again and many, many coaches want to see him get in (and totally forget about how he almost destroyed Kentucky basketball).

If Rick Barnes can get Tennessee to a Final Four — and heck in this fantasy scenario — win a championship, Barnes has legit Hall of Fame credentials. Don’t @ me Barnes haters, he’s the greatest coach in Texas program history.

Matchup to watch: While many will look at the Graham-Matt Coleman or Azubuike-Bamba matchups, who ever Kansas has playing Osetkowski and who ever Texas has Osetkowski guarding will be the one to watch.

If Kansas thinks it can guard Osetkowski with Vick, then coach Shaka Smart better have Osetkowski near the basket and playing old school bully-ball against the small-ball four. On the other hand, I’m not sure who Osetkowski guards on Kansas. Vick would be a nightmare for him. Mykhailiuk is probably a good bet, but that may take Osetkowski  away from the paint for defensive rebounds. I don’t think Texas and Osetkowski will have to worry about double-teaming Azubuike. If Bamba is a future pro and lottery pick, he should be able to take the powerful Kansas big man (7-foot, 280 pounds of dunking) without much help (unlike Stanford and Nebraska).

Will Texas press Kansas? They will, but Kansas is a team that can make Texas pay dearly for pressing them — especially considering how Tennessee State was able, at times, to break the press. Texas didn’t win that close game because of the press defense, they won because of the suffocating half-court man-to-man they have (Tennessee State was called several times for shot clock violations down late in the second half). Kansas’ two best offensive moves have been 3-pointers and the lob play. Texas has the best 3-point defense in the conference and I just don’t see Texas giving up easy lob plays, then again, it’s tough when Kansas has players who can connect on lobs like this:

Will Andrew Jones play? According to Jon Rothstein the standout sophomore is a game time decision. This will be huge if Texas can add their best offensive wing player they have.

Texas guard Andrew Jones (wrist) will be a game-time decision for Friday's Big 12 opener against Kansas, per Shaka Smart.

Bottom line: On one hand this looks like a terrible match-up for Kansas. The depth, length and defense of Texas is great. On the other hand, Matt Coleman has never faced a defender like Graham, who somehow is starting to get overlooked a bit. Texas, I think, is at its best when they’re playing fast, but that’s not what you want to do against Kansas, who is probably the best space-and-pace team in basketball. Both of these teams can fall in terrible scoring droughts, but Kansas’ offense is Final Four material when they’re rolling. Texas’ offense at its best is what? Kansas is top 20 in both offense and defense in KenPom for a reason. And also there’s the Erwin Center factor, where Texas hasn’t played well this season and students aren’t on campus.