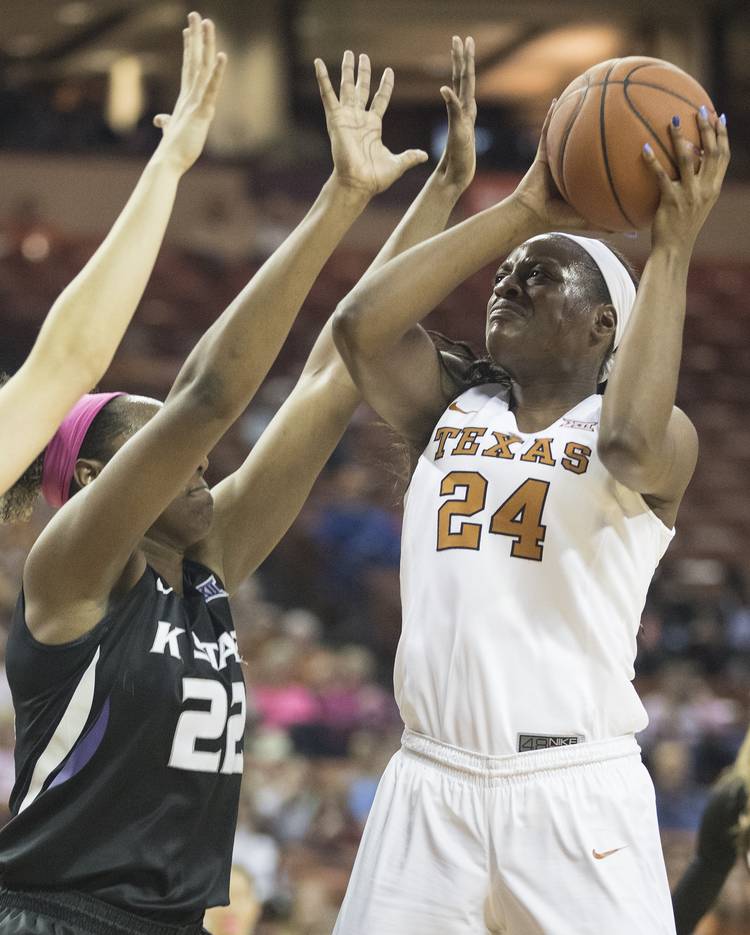 Texas Joyner Holmes will play forward an lend depth to that position upon her return Thursday Feb. 4 2017 RICARDO B. BRAZZIELL/AMERICAN-STATESMAN

While the Longhorns raced to a 9-1 record this season, Holmes worked out at her Dallas home as she served a suspension this past semester for what Texas officials termed a “university violation.” Her season debut Thursday night will coincide with the opening of Longhorns’ Big 12 season.

When No. 8 Texas tips off against Oklahoma in Norman, don’t expect Holmes — the conference’s reigning freshman of the year — to make a significant impact immediately.

“I’m not expecting to be in the starting lineup any time soon,” the 6-foot-4 Holmes, a forward, said Wednesday before a practice at Cooley Pavilion. “I’m going to have to work my way back.”

Holmes said she trained four to five times a week to prepare for her return to campus. She added that she contacted her teammates weekly during her absence.

Longhorns head coach Karen Aston said fans “must be realistic” about their expectations for Holmes as the conference seasons begins.

“She’s just had one practice under her belt, and it’s going to take time for her to get acclimated and comfortable just being on the court,” Aston said. “There’s a lot of mental processing that players have to go through under these circumstances.”

That said, there is a “flip side” to Holmes’ return, Aston added.

“There is a big opportunity here for Joyner,” the coach said. “We do have a little bit of a lack of depth at the forward positions. … It’s not a matter of talent, it’s a matter of not throwing her into a situation where she’s uncomfortable and the team is uncomfortable.”

Holmes will certainly help the Longhorns in time. She averaged 12 points and 8.2 rebounds last season while starting 32 of 34 games. She earned individual acclaim, too, earning All-Big 12 first-team honors after being named the conference’s freshman of the week seven times.

Aston recalled that last year’s team “hit a little bit of a wall” because key players were playing too many minutes when the Big 12 and NCAA tournaments arrived. The addition of Holmes gives Aston a chance “to rotate our bigs” to help them stay rested. The coach added that freshman guard Chasity Patterson has shown progress after the holiday break and could see more playing time soon.

Texas and Baylor are expected to dominate the conference race again, but West Virginia and Oklahoma also hope to contend for the Big 12 title.

“Every team in conference is ready to beat us so at the same time, we have to stick to what we do, stick to coach’s game plan and feed off of this and build off off it,” said McCarty, adding that Texas gained momentum by defeating Florida State 87-72 in its final non-conference game on Dec. 17.

Texas has a 29-25 all-time series lead against the rival Sooners. OU, though, has beaten Texas seven straight times at home. The Longhorns have won five of the past eight meetings.

As for Holmes, she said she learned some valuable lessons during her absence. “I don’t take anything for granted anymore,” she said.

With 19 regular-season games to play — including a home encounter against No. 1 Connecticut on Jan. 16 — along with postseason tournaments, there’s plenty of time for her to make a difference.

Starting 5: A win over Alabama and now it’s time for Kansas