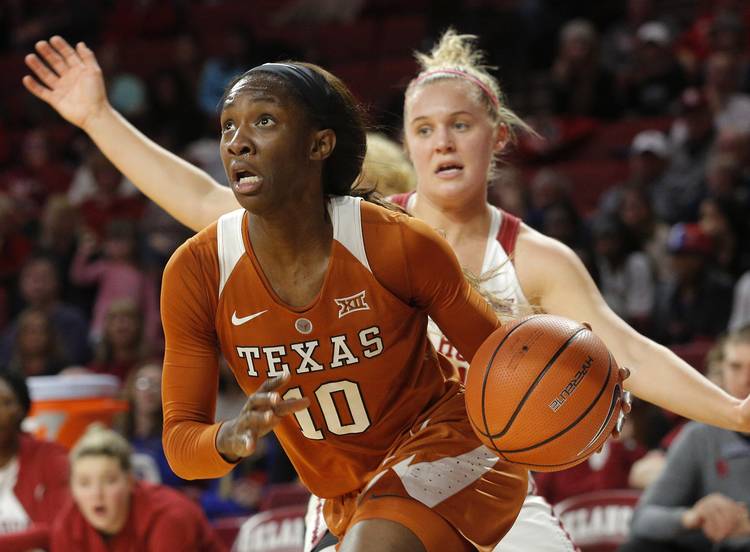 NORMAN, Okla. — Texas junior Lashann Higgs stepped on to a riser for a post-game press conference and promptly knocked a chair to the floor.

“That might have been the only thing she did wrong tonight,” Karen Aston said.

Indeed, Higgs was the central figure for the Longhorns in an 88-78 victory over Oklahoma in the Big 12 opener for both teams Thursday night at the Lloyd Noble Center.

The Longhorn guard hit 8 of her 13 shots from the field and scored a career-high 25 points to help Texas win in Norman for the first time since 2010.

This was a significant victory for No. 8 Texas, which figures to be in a season-long fight with Baylor for conference honors. At 10-1 overall, Texas has beaten one of its chief rivals and Higgs was the catalyst.

Aston said it was a “total team effort,” saying all of her players made contributions. But it was Higgs who helped the Longhorns jump out to a 26-13 lead after one quarter, and she capped her night with a spectacular reverse layup with 2:30 remaining in the fourth quarter.

“I don’t know if this is for sure or not, but I think (OU) gambled a little bit and let her shoot the ball early in the game and she hit some big shots,” Aston said. “That gave her confidence and it gave our team confidence. There are two things she’s done that have improved tremendously — her ability to go from play to play and her three-point shot. She’s now a threat in different areas.”

In the big picture, though, it was just one victory in an 18-game conference schedule. But for senior guards Ariel Atkins (15 points, 9 rebounds) and Brooke McCarty (12 points 5 rebounds, 4 assists), it marked the first time they had won a road game against the Sooners.

“Winning the first game in conference here is not easy to do,” Atkins said. “I feel like people stepped up. I can’t say enough about Lashann and her growth.”

Joyner Holmes, suspended for the first semester, made her season debut and went scoreless in three minutes of play. She didn’t enter the game until midway through the second quarter. She picked up two quick fouls and returned to the bench.

“It was a matter of a lack of reps,” Aston said. “I said two days ago there’s no sense in having unrealistic expectations for her. When you have missed that much time, only reps and practice will make them comfortable.”

Oklahoma, 5-7, offered no excuses. Coach Sherri Coale, whose team lost to top-ranked UConn on Dec. 19, said the Huskies and Longhorns have a few similarities.

“Tonight, we were affected by (UT’s) speed and athleticism, which surprised me a little,” Coale said. “We were just on the floor with Connecticut and held our own. The athleticism of Texas is different, even though Connecticut is full of McDonald’s All-Americans too. The speed of Texas and the way they attack in transition took us out of any sort of rhythm and tempo, and I don’t know if we ever found it.”

As for Higgs, her previous high was a 19-point effort against UConn in the 2016 NCAA Tournament.

Texas received a tremendous defensive effort from post Jatarie White and forward Audrey-Ann Caron-Goudreau, who limited OU post Vionise Pierre-Louis to six points and five rebounds. In OU’s 73-72 victory over Texas last season in Norman, she had 23 points and 9 boards.

Texas will play its first Big 12 home game of the young season when it plays host to West Virginia at 3:30 p.m. Sunday at the Erwin Center.