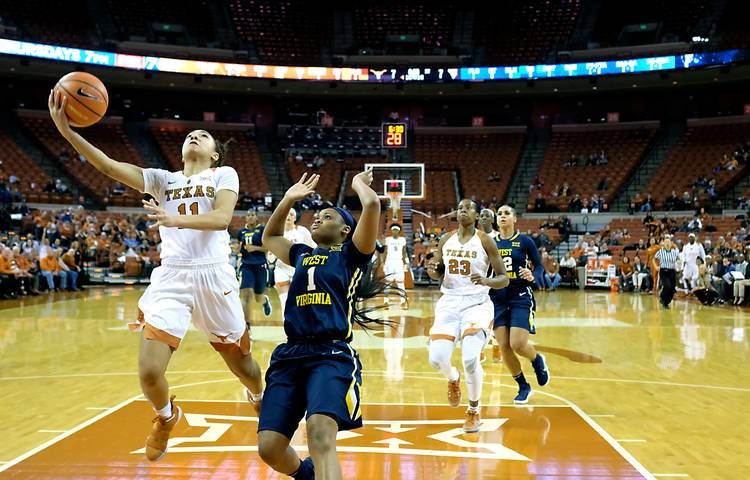 The highly anticipated game between No. 8 Texas and No. 9 West Virginia didn’t live up to its billing.

Instead of a Big 12 shootout between two of the conference’s top dogs, Texas showed who’s boss by trouncing the Mountaineers 79-58 Sunday afternoon at the Erwin Center.

In a game with little intrigue after halftime, Brooke McCarty nailed the 200th three-pointer of her career and Karen Aston was able to clear her bench early. Freshman Rellah Boothe, who has become a fan favorite, hit a pair of three-pointers in a 40-second span. After her second trey, she heard of chorus of “Boooooooooothe” as she trotted back for defense.

McCarty had one of the best all-around games of her career, finishing with a team-high 17 points, 3 assists and a career-high 9 rebounds. The 5-4 senior was modest when speaking of her three-point milestone but said she was proud to reach it.

“Coach recruited me because I could shoot”, McCarty said.  “It’s something that just comes with the job but it’s great to be part of that type of history, especially since Texas is all about history.”

Aston, overhearing those comments, said shooting wasn’t the only thing that impressed her when McCarty was playing high school basketball in League City.

“The shooting came along with it,” Aston said. “I recruited her because she has ‘it’. ”

West Virginia’s previous scoring low came in a 66-56 victory over Morehead State. WVU was playing without two of its regulars, Tynice Martin and Anja Martin. Coach Mike Carey, though, offered no excuses.

“Give Texas credit,” said Carey, adding he will not take a second look at the game on video. “They keep coming in with new players. They have a lot of height, a lot of talent, a lot of bodies. … The good thing about basketball is that you have another game in two days.”

While Texas can feel good about the victory, this was hardly UT’s finest hour. The Longhorns were often careless with the basketball, committing 24 turnovers.

When Carey opened his press conference, he applauded Texas for its 23 offensive boards. That helped give the Horns a 54-26 edge in points in the paint and an 18-9 advantage on second-chance points.

For the second straight game, sophomore forward Joyner Holmes went scoreless after returning from a 10-game suspension. An All-Big 12 Player last season, she will have to see improvement in practice before it shows up in games, Aston said.

Texas returns to Big 12 action against Oklahoma State at 7 p.m. Wednesday at the Erwin Center.

Starting 4: A 1-1 start with a Bear trip coming up