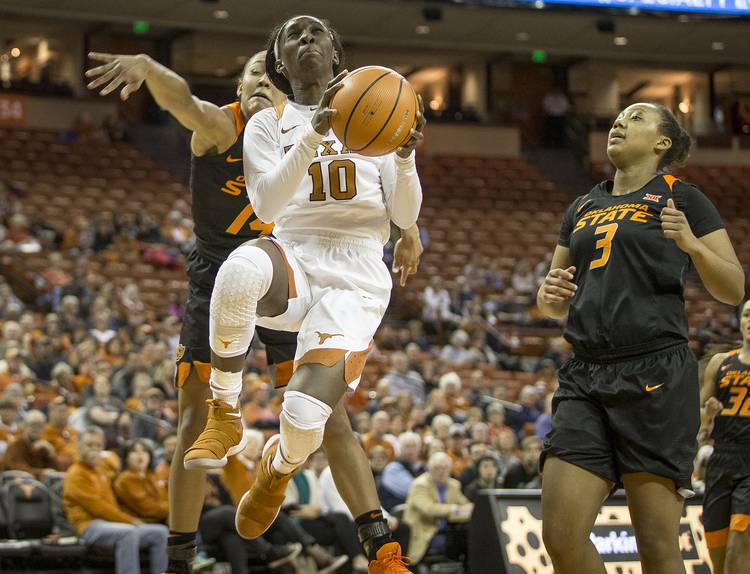 Lashann Higgs’ ability to play basketball is matched by a new-found confidence to carry a team with the game on the line.

Such was the case when the junior guard scored a career-high 30 points to rally the Longhorns to a thrilling 84-79 victory over Oklahoma State in a key Big 12 matchup Wednesday night at the Erwin Center.

Higgs connected on 11 of her 15 shots from the field, hit all seven of her free throws, and scored 9 of her points in the decisive fourth quarter. Teammate Brooke McCarty 21 points and a career-high 10 assists — her first double-double in four years with Texas.

Texas (12-1, 3-0) trailed for most of the game, but the Longhorns used some key defensive stops to fuel the comeback. The Longhorns limited OSU (11-3, 2-1) to 12 points in the fourth quarter and won their fifth straight game.

OSU coach Jim Littell and UT’s Karen Aston pointed to Higgs’ confidence as the most telling improvement in her game.

“You can see in her eyes that she exudes confidence,” Littel said.

Aston added that Higgs is “more mentally tough” than her previous two seasons at Texas.

“It’s more about trusting my work more,” said Higgs. “I’m kind of forcing myself to be mentally tough for the team. … Our seniors are going to be leaving us soon. I’m trying to give it all I have.”

Higgs’ performance came six days after she scored a career-high 24 points during an 88-78 victory at Oklahoma.

With the game on the line on Wednesday, Texas rallied from a six-point deficit with five minutes to play.

After Texas and OSU traded field goals, the Longhorns received consecutive buckets from Sug Sutton — the second a three-pointer from the left baseline — to pull Texas within 77-76.

Higgs would give Texas the lead for good with a pair of free throws with 2:35 to play and McCarty followed with two more with 2:17 to go to put the Horns on top 80-77.

OSU climbed within a point on a 10 foot jumper by Areanna Combs with 1:50 to play, but the Cowgirls would get no closer.

“Credit our players who didn’t panic,” Aston said. “They didn’t allow anybody in the huddles to get down or get disconnected. As the game went along they became more connected and just dug their heels in and found a way to win.”

This was a crushing defeat for the 20th-ranked Cowgirls, who led 22-18 after one quarter, 44-40 at halftime and 67-63 entering the fourth quarter. Freshman guard Braxtin Miller was spectacular in defeat, scoring a career-high 23 points while teammates Kaylee Jensen and Loryn Goodwin scored 20 apiece.

“This one stings a little bit,’ Littel said. “I’m very, very proud of our kids. Their competitive spirit and their desire to step up and make plays was tremendous. … Texas had some kids step up and make some plays down the stretch. We didn’t have an answer for Lashann Higgs. We knew she was good off the dribble. We kind of planned on that but she still got to the rim.”

In her third game back from suspension, Texas sophomore Joyner Holmes scored her first points of the season on a short bank shot midway through the second quarter.

The Longhorns continue their Big 12 schedule Sunday at Kansas State.