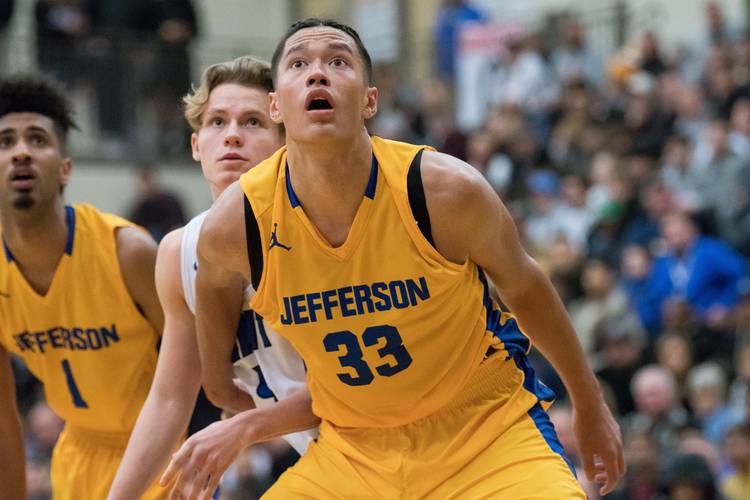 Texas signee Kamaka Hepa grew up in Barrow, Alaska --- the northernmost community in the United States --- and has signed to play for Texas. He'll arrive later this year. Kent Frasure/The Oregonian

PORTLAND, Ore. — It’s a long journey from Barrow, Alaska to Austin, Texas. A journey complete with state championships, a rainy pit stop and one big decision.

Kamaka Hepa, the 6-10 forward who signed with the Longhorns in October, is originally from Alaska. But not just anywhere in Alaska. He’s from Barrow, the northernmost community in America.

Put your finger on top of a globe. That’s Barrow.

“It’s different,” Hepa said. “I would describe it as an isolated, small village.”

Hepa grew up in a town where, for 65 days a year, the sun does not rise above the horizon. And for 80 days in the summer, the sun is constantly present.

As the crow flies, Barrow is 1,100 miles north of Juneau, the state capital. And it has to be measured that way — there’s no way to drive to Barrow. From anywhere. Hepa’s hometown is entirely secluded and impossible to enter or leave except by airplane.

Residents drive snowmobiles around. It’s not uncommon to see a polar bear milling about town.

But in the spring of 2016, Hepa and his family moved south to Portland, Ore.

“I thought I had to come down here to give myself the best opportunity,” Hepa said.

As a freshman and sophomore, Hepa won Gatorade’s player of the year award and led his team to two Alaska state championships.

Hepa was dominant. Maybe too dominant. He needed a challenge. His father Roland, a burly 6-2 Hawaiian, loved the intimate nature of Barrow but realized the opportunities and exposure available in the Lower 48. The precise location for the move was largely left up to Kamaka, who felt that playing in Nike’s Elite Youth Basketball League Circuit for the Portland Basketball Club would be beneficial.

So the family ended up in Portland.

“Being the ability that he was blessed with, if we wanted to maximize his potential, we thought that it’d be best if he played somewhere where there’s a lot more potential and more kids of his size,” Roland Hepa said.

Kamaka is ethnically Hawaiian, Filipino, Inupiat (Eskimo) and white and has floppy black hair that he regulates with a headband or braids. On the court, he is a rangy and athletic stretch four who can shoot the three and punish the rim with dunks. There are few things the 4-star forward can’t do on a basketball court.

Texas assistant coach Darrin Horn lauded his skill, size and basketball IQ. “To find a guy that has all three of those is pretty rare,” Horn said.

Roland first noticed Kamaka’s ability when he was in second grade.

“I thought, ‘We might have something here’,” he said.

Roland and some other community members formed a team of kids to play competitive travel basketball. They won their first tournament, in Anchorage, which was not terribly surprising considering how popular hoops is in the town.

With temperatures below freezing eight months a year, kids are largely focused upon indoor sports.

Michael Plank, who coached Hepa’s AAU team in Portland, joined the Hepas in Barrow for a weekend visit in October.

“It’s all that more amazing that he is who he is being from that place. Pretty remarkable,” Plank said. “That place is just desolate, man. It’s too cold for vegetation to grow. It’s too cold for trees and bushes. You can’t really drive there, you can only fly. It’s legitimately on the Arctic Ocean. It freezes for an extended period of time in the winter. It’s just bizarre. There’s a really, really cool culture. That’s a difficult setting for a high major basketball prospect.”

Now, Hepa is a superstar at Jefferson High School in Portland. A year ago, he averaged 18 points, 11 rebounds and 6 blocks per game in helping Jefferson to a state title.

He also turned heads playing in the EYBL Circuit and drew offers from more than a dozen high-major schools, including Arizona. Eventually, Hepa decided between Texas and Gonzaga. He visited both schools and then, on his phone, made a pro/con list of each college. By the end of October, he told coach Shaka Smart the good news.

For Hepa — from a town of 4,000 where residents communally feast upon a whale and celebrate together whenever one is caught — the idea of community is important. He felt that he could find a sense of family with Texas and its players.

During the Longhorns’ trip to Portland for the PK80 tournament over Thanksgiving, Texas players practiced at Hepa’s high school and he got to watch the team in action.

“I’m most excited to play for coach Smart,” he said. “Just watching him at the PK80 and other games, how involved he gets and how into the game he is. He seems like a coach that really has passion for the game and that’s something that I have.”

During his official visit in September, Hepa spent time with freshmen Matt Coleman and Mo Bamba. He also sat down and chatted with former Longhorns star and current Indiana Pacer Myles Turner, who has already achieved Hepa’s goal of playing in the NBA.

If Hepa is to accomplish that feat, he would be the first Inuit (Eskimo) to do so.

In mid-December, Horn — who called Hepa a “home run recruit” — visited Portland to watch his high school opener. Horn expects Hepa to be able to contribute for Texas right away.

“He can really shoot the basketball. He’s a tremendous passer and playmaker for his size. And (he has) a commitment to winning. That’s just what he does,” Horn said.

With three state titles to his name, Hepa has the unique opportunity to finish his high school career with four championships. He also could end up as a 1,000 point scorer in two states. He has 1,016 Alaskan points and scored 434 points in Oregon as a junior.

But amid all of his success, Hepa and his family also faced tragedy.

During Hepa’s sophomore year and before his move to Oregon, his 29-year old brother, Kawika, died unexpectedly. It shook the family.

Throughout his life, Kamaka had known he would eventually leave Alaska for basketball and Kawika was one of the proponents of that decision. A week after winning his second state title and just months after Kawika’s passing, the Hepas moved out of Barrow.

Hepa now lives in drizzly Portland with his younger brother, Keoni, his father and his mother, who still commutes all the way to Alaska for government work. His father began working the graveyard shift at a factory in November to supplement the family income, but still allow him to spend time with his family. And, of course, watch Kamaka’s games.

It’s not decided yet if the family will move to Austin, as they also have to consider Keoni, a football player in the class of 2020.

What’s for sure is that Kamaka will be in Austin next year. Another big move.

“It’s gonna be a large environment change,” Hepa said. “It was really different in Barrow and moving here (to Portland) was a tough transition going from a little village to a city. Obviously this is going to be a lot easier since I’ve kind of lived in a city and Austin and Portland are really similar. Other than the weather.”

Soon enough, Austin will have a new basketball-playing resident — Hepa, from the land of whales, polar bears and snowmobiles.