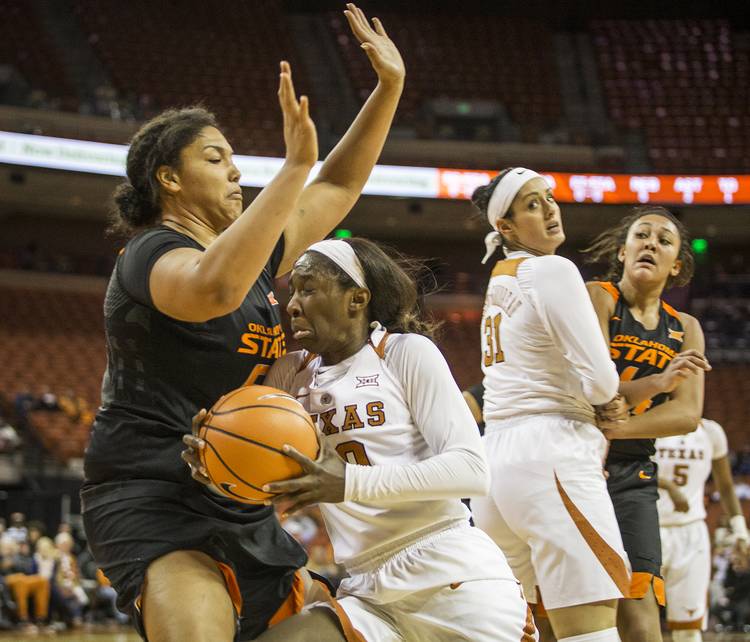 MANHATTAN, Kan. (AP) — For the first 15 minutes, Kansas State gave Texas all the No. 8 Longhorns could handle.

Then Lashann Higgs knocked down a three from the corner to give Texas the lead and the Longhorns never looked back.

Higgs scored 26 points and No. 8 Texas used a big run to start the second half to beat Kansas State 75-64 on Sunday. Even with leading scorer Brooke McCarty having a rough shooting day as she scored just nine points, the Longhorns (13-1, 4-0 Big 12) had enough to beat the Wildcats.

“Credit to K-State’s defense that made us play off balance,” Texas head coach Karen Aston said. “Definitely wasn’t one of our better performances, I thought we did a pretty good job on their key offensive players.”

Kansas State (9-6, 1-3) took the early advantage holding the Longhorns to 12 points on 26 percent shooting in the first quarter.

Texas would have many chances to take the lead, but didn’t take advantage until Higgs hit a corner three at the 2:23 mark of the second quarter to give the Longhorns their first lead of the ballgame. On the next possession, Rellah Boothe would come back and surprise everybody with a three-pointer of her own.

“It kind of gave us the breathing room we needed,” Aston said. “It gave us a chance to regroup at halftime and talk about some things that were open against their zone. I thought we were better on the boards in the second half. I felt like we stood around too much in the second half.”

Meanwhile, the Wildcats struggled to generate offense as they went scoreless in the last 3:19 of the 1st half.

For a team that was trying to pull off their second straight upset in conference play, that scoring drought proved to be the beginning of Kansas State‘s undoing.

“Their pressure defense got into us during that stretch,” Kansas State head coach Jeff Mittie said after the game. “They got some run-outs in that stretch while our offense got bogged down and then we missed some shots that we normally make I think that’s that’s due to a team that plays physical on you and you’ve got a do a job better handling that. Or decision making in that stretch was not good, that’s part of what Texas does. They speed you up and play physical and we’ve got to do a better job handling that pressure.”

Kayla Goth scored 17 points on 6 of 17 shooting in the loss for the Wildcats.

Kansas State could not pick up back-to-back victories against ranked opponents but do manage to frustrate the Longhorns with their zone defense in the 1st half. However, the second half of the ballgame saw the Longhorns show their resolve and toughness as they put away the Wildcats with turnovers and athletic fast-break offense. A win like this is a good sign for the Longhorns as they have even tougher opponents like Texas and Baylor down the road.

Texas: The Longhorns travel to face TCU on Wednesday.