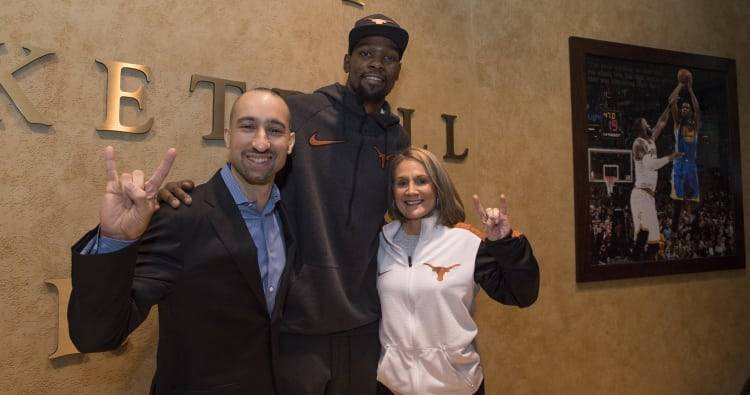 Texas-ex Kevin Durant (center) stands alongside men's coach Shaka Smart and women's coach Karen Aston on Friday as the entrance to the practice facility was named in his honor. Bethany Hocker/UT Athletics

Every Wednesday we shine a little Texas history spotlight on Hookemplus.com.

On Jan. 10, 2007, playing in his second Big 12 game, freshman Kevin Durant scored 34 points against Missouri in a 88-68 win at the Frank Erwin Center. It’s the most points scored in a player’s first two games conference games in Big 12 history (he scored 37 the game before).

Durant did it against then first-year coach Mike Anderson, who would later leave to coach one of Texas’ oldest rivals, Arkansas, after what would be a successful run at Missouri. The win on this day 11 years ago also made Texas coach Rick Barnes 9-0 in Big 12  home openers at Texas. Barnes wouldn’t lose a Big 12 home opener until Jan. 9, 2013, when West Virginia, in its first year in the Big 12, beat Texas 57-53 in overtime.

Durant, from Maryland, went on to win most national player of the year awards and helped Texas to an NCAA appearance.

And of course he became the No. 2 pick in the NBA Draft, an NBA MVP, Olympic Gold Medalist and NBA Champion. He is undoubtedly one of the greatest basketball players in the history of the game — let alone one of college basketball’s greatest “one-and-done” players.

And while Durant didn’t play long for Texas, he’s never forgotten about his time at Texas, and last week he showed just that when he gifted $3 million to the University of Texas. That single donation was a record-breaking one for former Longhorn basketball players (Yo, LaMarcus Aldridge, let’s go!).