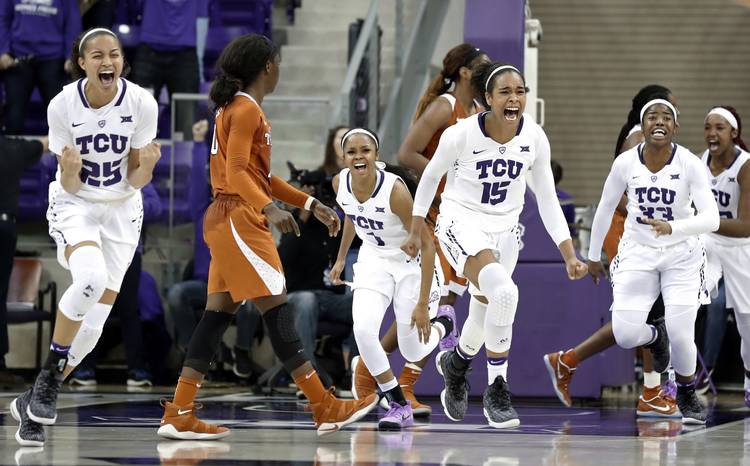 FORT WORTH —  A pair of Austin-area products combined for 36 points, four rebounds, four assists and five blocked shots to lift TCU to a surprising 79-77 victory over No. 7 Texas at Schollmaier Arena on Wednesday night.

Jordan Moore, from Stony Point, put the Horned Frogs in position for the upset. Then Bowie’s Kianna Ray sealed the deal.

Moore scored a team-high 19 points and Ray sank a pair of free throws with six seconds left to produce the biggest upset so far of the Big 12 season.

The Longhorns lost because they shot only 41.6 percent, but it goes deeper than that, Texas coach Karen Aston said.

“I don’t think we showed up defensively at all today,” Aston said. “Where we got ourselves in a mess was on somebody’s home court not being ready defensively. We could have set the tone for the entire game in the first quarter because we were playing well offensively. We didn’t care to guard them and we allowed them to get some confidence.

“Credit to TCU. They played harder than we did today, they played with more urgency and a lot more passion to win. I thought we played in spurts, which is what we’ve been doing.”

Texas lost despite a sensational night from Ariel Atkins, who had a large support group of friends and family from the Dallas-Fort Worth area. She carried the Horns with 25 points and hit a 10-foot jumper from the middle of the lane with 16.5 seconds to play that tied the game 77-77.

That only set the table for Ray, who calmly hit a pair of free throws to give the Horned Frogs the lead for good.

Texas guard Lashann Higgs took a desperation shot from the top of the key in the final moments that missed its mark.

Atkins said she had an “empty feeling” after coming up short, and added that she was partly to blame for the loss.

“A part of it is me being the energy player they need me to be,” Atkins said. “I wasn’t that for the complete time I was on the court today. I played in spurts, honestly. I’ll get back to the gym and work on it.”

While Texas looks at the game from disappointed eyes, TCU basked in the glow of a signature win for a program that has struggled for decades. Texas entered the game with a 40-2 record over the Horned Frogs, including a 19-2 mark in Fort Worth.

The biggest smile of the night belonged to Ray, who said she wasn’t nervous while taking the go-ahead free throws.

“We’ve been in the spot (of losing close games) so many times, we just don’t want that feeling anymore,” Ray said. “Now we know what it takes, just hard work, and whenever we look over, and four other people on the court, and then everybody on the bench is working hard for us too, it just fires us up to work hard for every other person on the team.”

TCU took advantage of a disastrous second quarter for the Longhorns. After leading 22-14 after one quarter, the cold-shooting, mistake-prone Horns were outscored 26-9 in the second. TCU led 40-31 at the half.

To UT’s credit, the Longhorns rallied behind Atkins, Higgs (18 points) and Brooke McCarty (career-high 11 assists). When Texas took a 71-67 lead on a Higgs layup with 2:32 to play, it appeared the Horns might escape with a victory. TCU, though, outscored Texas 12-6 down the stretch.

Higgs, the Big 12 player of the week, was asked if she was shocked by the outcome.

“I’m not shocked at all, actually,” Higgs said. “We didn’t come to play. We didn’t play defense like we know  how to play.”

Texas also received a good effort from senior Audrey-Ann Caron-Goudreau, who had 11 points, six rebounds and four blocked shots. Nevertheless, TCU feasted on easy buckets in the paint, a problem for Texas that lingered for most of the 40 minutes.