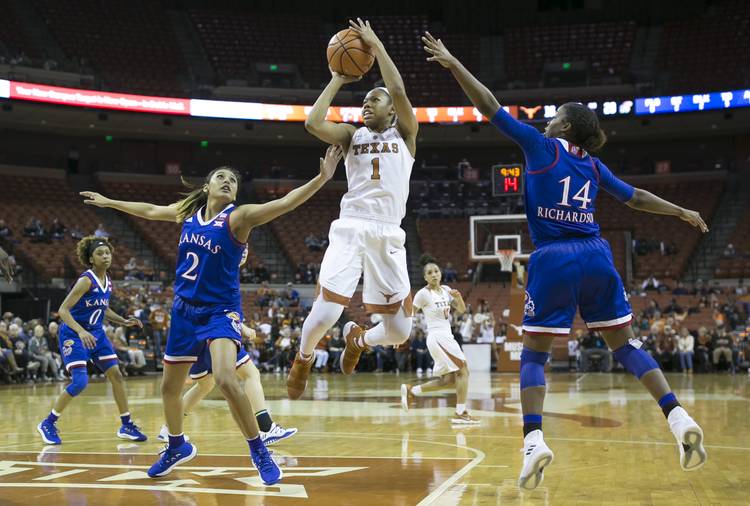 For a few moments, Texas forward Joyner Holmes was reliving her freshman season.

The Longhorns rallied for a 79-62 victory over Kansas at the Erwin Center on Saturday, which might be remembered as the day Holmes turned her season around. With 11 points and nine rebounds in 23 minutes, she reminded 4,015 fans on Texas Exes Day just how valuable she can be to the team’s success.

Ariel Atkins had another fabulous performance, scoring 22 points to go with nine rebounds and a career-high seven steals, and Lashann Higgs contributed 17 points on 6-of-7 shooting from the field.

After a 79-77 loss to TCU on Wednesday, Texas appeared to regain some confidence heading into Monday night’s circle-the-calendar game against top-ranked UConn.

The Big 12 freshman of the year last season needed a game like this to shake the cobwebs from a 10-game suspension she served during the fall.

“Anyone who was in my position is going to feel frustration, knowing I’m as good as the players around me,” the 6-foot-4 sophomore said. “Right now all I want to do is contribute in any way I can.”

This was no easy victory for the Longhorns, who trailed 31-29 at halftime. Coach Karen Aston suggested the players “might have felt sorry for themselves” after losing in Fort Worth.

Atkins led UT’s second-half charge by scoring 10 points in the third quarter. On defense, Holmes flexed her muscles in the paint, gathering seven of her nine rebounds in the second half to help prevent a major upset.

Kansas coach Brandon Schneider said Texas won the game by dominating the boards in the second half. The Longhorns had a 28-9 rebounding edge in the half, and Holmes was a catalyst, he said.

“Joyner Holmes is a very difficult matchup, not just for us but every team in the country,” Schneider said. “There are very few (power forwards) who have her size, strength and athleticism.”

With Kansas and Texas tied 33-33 early in the third quarter, center Jatarie White gave the Longhorns the lead for good with a baseline jumper. That was the beginning of an 18-4 run over a five-minute stretch that gave Texas a 51-37 advantage.

Kansas guard Christalah Lyons scored 20 points, and teammate Brianna Osorio chipped in 13 points and eight rebounds to keep the Jayhawks competitive, but they never mounted a serious challenge after Texas made that run.

“Any Big 12 win is good,” Aston said. “When you see the K-State-Oklahoma State score (an 80-64 Kansas State upset Saturday), you realize that anything can happen on a given night. I’m just pleased to win, but we really played well in the second half.”

UT’s rough early start can be traced to problems in the paint. Starting forward Audrey-Ann Caron-Goudreau was sidelined with an injured right quad, and she spent the afternoon riding a stationary bicycle behind the Texas bench. When White got into early foul trouble, that forced Aston to reshuffle her lineup.

Alecia “Sug” Sutton, who had taken Caron-Goudreau’s spot in the starting lineup, responded with a career-high 14 points.

Brooke McCarty, who suffered through a 4-for-14 night at TCU, continued to struggle, going 1-for-8 from the field. Aston said there is no need to be alarmed, saying shooters have a way of breaking out of slumps at any given time.

Texas, the nation’s No. 2 rebounding team, had a 47-27 edge on the glass. That helped the Longhorns earn a 22-3 edge in second-half points. White was effective under the boards, gathering six of her eight rebounds on offense.