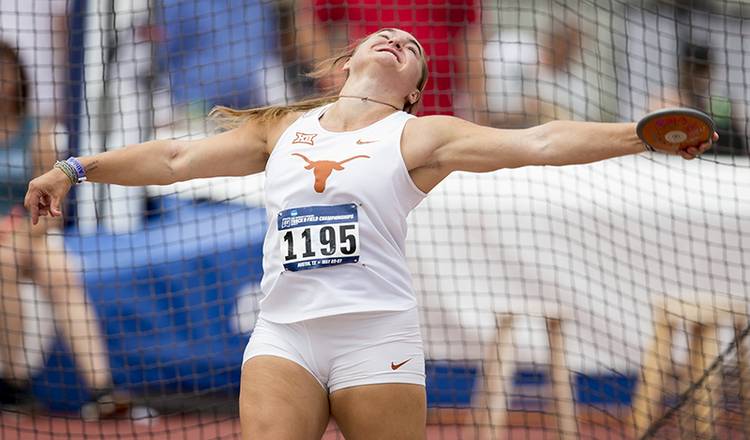 Elena Bruckner of UT competes in the Discus Throw at the NCAA Track and Field Championships West Preliminary at Mike A. Myers Stadium on Friday May 26, 2017. JAY JANNER / AMERICAN-STATESMAN

Saturday was a big day for Texas’ throwers and vaulters at the Corky Classic in Lubbock.

Tripp Piperi set a meet record at Tech’s new Sports Performance Center as he put the shot 63 feet, 11 ¾ inches to take first place. The freshman looks to be well on his way to making big throws as a Longhorn.

“That was a heck of a performance by Tripp Piperi,” head coach Mario Sategna said. “He has the No. 2 throw in the nation, and he’s not far off of what Ryan Crouser was able to do as a freshman. That shows what a special talent he is and the potential he has to be one of the best throwers in the country.”

Elena Bruckner won the women’s shot put event with a distance of 54-½. It was a personal best as well as a meet record at the inaugural Corky Classic.

Barrett Poth and Kally Long won the men’s and women’s pole vault. Poth cleared a height of 17-1½, and Long set a meet record by clearing 13-6 ¼.