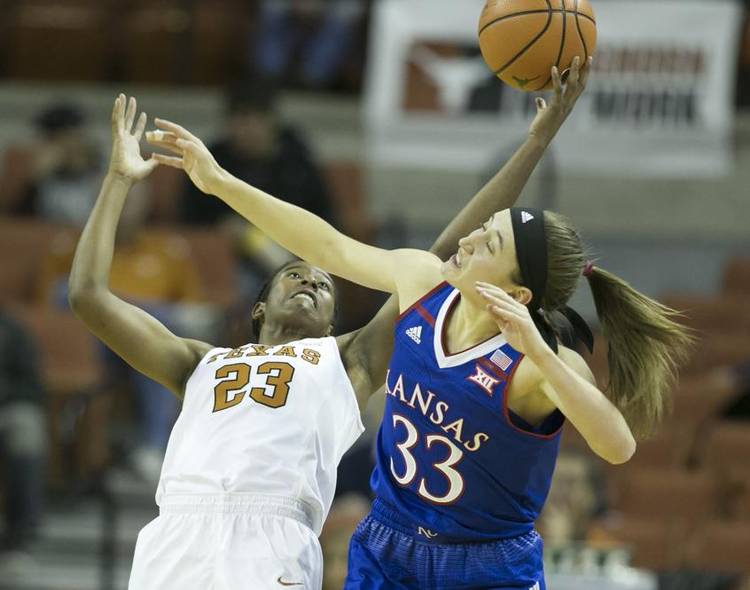 Ariel Atkins has scored 47 points in her past two victories. Photo by Jay Janner.

Top-ranked UConn comes to the Erwin Center Monday and will give Texas a measuring stick to see how far the Longhorns have come under head coach Karen Aston, now in her sixth season.

This marquee matchup should be a win-win situation for both teams. Auriemma gets to showcase his team in a state ripe with high school basketball talent. The draw of a program like UConn will also give Texas a large home crowd, likely the largest since Oklahoma drew 11,245 in 2007.

“I’m really excited that the community embraced it because it is a game for women’s basketball regardless of what happens,” she said. “I appreciate Geno for coming here in the middle of his conference play. And I appreciate our school and ESPN for asking us to do it. It’s in the middle of our Big 12 Conference schedule but it is one that players want to play in.”

UConn warmed up for their showdown with the Longhorns by dismantling Houston 95-35 on Saturday in Houston. with a 95-35 victory Saturday. By Sunday morning the Huskies had made the 170-mile trip to Austin and were practicing at the Erwin Center.

“It’s going to be a crazy, crazy environment,” Auriemma said. “In the last 4-5 years it seemed we played (UT) almost every year but it was in the NCAA Tournament or in some kind of event. We have always managed to play them on neutral courts. On campus, this is going to be crazy.

“I think the fact they haven’t beaten us is going to be a real issue. I think it’s going to be hard for us because they are going to be off-the-charts crazy about beating us and I don’t know if there is a lot of love lost between us and them.”

UConn has an 8-0 record against Texas, but only one game has been played at the Erwin Center.

The seventh-ranked Longhorns have made significant strides under Aston, reaching the NCAA Tournament four straight years while going 102-37 in that span.

“This is like a bowl game for us,” said Chris Plonsky, UT’s director of women’s athletics for 16 years. “This (game) is a credit to Ariel (Atkins), Brooke (McCarty), the seniors and Karen. Our kids need to be confident. There won’t be a lack of effort.”

Atkins said the Longhorns are “in a really good position” to play UConn.

UConn is among the national leaders in several individual and team statistics.

Texas has some impressive numbers, too.

What will it take to beat UConn?

“It will take a really exceptional performance, no question about it,” Aston said. “They so good in so many different ways. They’re fast, they’re really good in transition, they’re solid defensively. They have five people on the court that can score at any moment.”

Texas’ Chiaka Ogbogu to begin her professional career in Italy