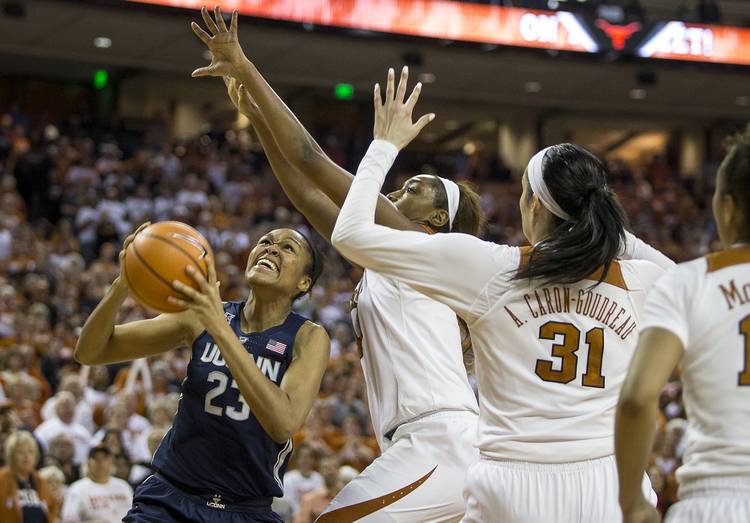 In defeat, Karen Aston hopes the effort her team gave during a disappointing loss to top-ranked UConn becomes a common theme.

The Huskies outlasted No. 7 Texas 75-71 in a women’s basketball showcase game Monday night at the Erwin Center. There are no moral victories for an up-and-coming team, but the 11,877 fans witnessed a Longhorns team that has made great strides in recent years.

UConn, though, used a 19-point night from forward Katie Lou Samuelson and guard Crystal Dangerfield nailed a pair of free throws with eight seconds left to seal the victory.

What was the difference.

“We made a couple more plays down the stretch and that was just enough to win the game,” coach Geno Auriemma said.

Indeed, this was a game Texas could have won. Center Jatarie White scored 18 points and guards Brooke McCarty and Ariel Atkins scored 14 points to keep the Longhorns in contention. Texas earned a 36-30 edge in rebounds, a 16-9 advantage in second-chance points and led for a good portion of the nationally televised game.

When Atkins nailed a jumper with 4:01 to play, UConn’s lead was sliced to 69-68. The Huskies, though, would never relinquish the lead, and free throws proved vital. UConn finished 17 of 19 from the line while the Horns were 8 of 14.

For a team that has been manhandled by UConn in NCAA Tournament games in recent years, Texas had reason to feel good about its performance.

“I’m proud that we had so many people come out to watch women’s basketball in Austin, Texas, and I hope they come back,” Aston said. All fans in the lower half of the arena were given orange and white T-shirts with “Defend the Drum” written across the front.

There were 14 lead changes in the game. Texas led by as many as 10 points in the first half and the Huskies’ biggest lead was 6 points. Texas led the game for 22 minutes, 43 seconds. UConn led for 16:54.

No one played better for Texas, the 6-4 transfer from South Carolina. She made 8 of her 12 shots from the field and helped limit UConn forwards Gabby Williams and Napheesa Collier to a combined 16 points.

What did White learn from the game?

“We don’t need to be taking days off,” said White, referring to the team’s inconsistency on defense.

“Our defense is good but not where we need to be,” McCarty said.

With McCarty and Atkins hitting behind the three-point line, Texas got off to a good offensive start and led 24-21 after one quarter. UConn battled back and took a 39-38 lead at halftime when Collier hit a reverse layup with two seconds remaining in the second quarter.

Auriemma complimented Texas, saying the Horns are far better than the teams that lost to UConn in the NCAAs in recent years.

“The biggest difference is that they were able to sustain (its hot start),” the coach said.

Auriemma also applauded the atmosphere of the Erwin Center. “I wish we could play two games like this a week.”

Texas returns to its Big 12 schedule against Texas Tech at 3 p.m. Saturday in Lubbock.

The Dotted Line: Texas casts out new offers to 2019 prospects