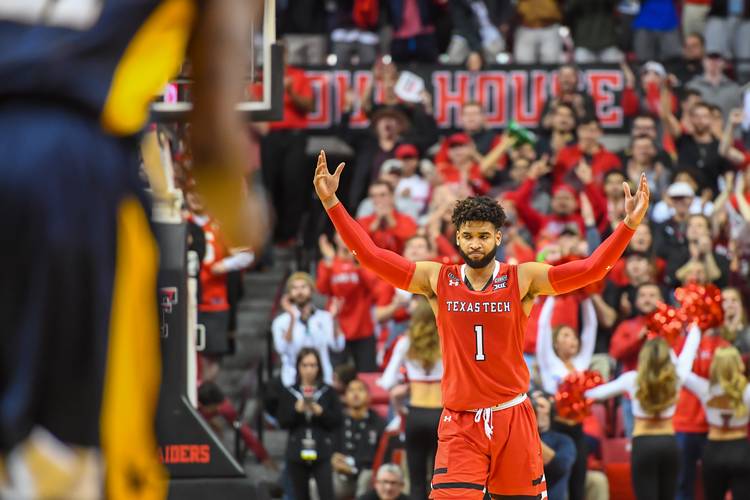 Texas Tech's Brandone Francis rallies the crowd during the game against the West Virginia Mountaineers on January 13, 2018 at United Supermarket Arena in Lubbock, Texas. (Photo by John Weast/Getty Images)

“I don’t know if we have an edge on Kansas in anything,” Beard told Kansas reporters after Tech’s rather complete 85-73 win over the reigning 13-time Big 12 champions. “Maybe we have Whataburger in Lubbock, Texas. I don’t think y’all do. That’s an advantage.”

Then, after last Saturday’s impressive win over No. 2 West Virginia, Beard noticed some mild shock coming from ESPN.

“The announcers were like kind of surprised,” Beard said, “and I was like, this isn’t a surprise for any of us here.”

The eighth-ranked Red Raiders (15-2, 4-1 Big 12) come charging into the Erwin Center on Wednesday looking to keep it rolling against the Longhorns. It’s been years since Texas (11-6, 2-3) faced a Tech team this dangerous and diverse.

“He’s got them really bought into playing as a team,” UT coach Shaka Smart said. “If you look at their statistics, I believe they have only (three) guys in double figures scoring wise. But they’ve got a lot of really good players who have bought in right now who have scored five, six, seven, eight points (per game).”

The Longhorns continue to be without Kerwin Roach Jr., who is likely to miss the next two games with his fractured left hand injury. Tech got some bad news, too, when it was learned Zach Smith (6.5 points) is out for the year with a broken foot.

The locals are so excited about the Red Raiders’ resurgence, they might have gotten a little handsy with the Mountaineers. Tech fans stormed the court after the stunning win in what was the first top-10 matchup in Lubbock.

West Virginia’s Wesley Harris was reprimanded for allegedly hitting a fan. Tech was fined $25,000 for how it handled post-game protocol. Regardless, the Tech fan base has been aching for solid basketball. Aside from this season, Tech has been in the AP Top 25 only one other time in more than a decade — the Raiders got as high as 16th in the 2009-10 season.

Beard, a student assistant under Texas coach Tom Penders, earned a kinesiology degree from UT in 1995. He spent several years at smaller colleges until landing on Bob Knight’s staff at Tech in 2001. He stayed with the Raiders for 10 seasons and remained when Bob’s son Pat Knight took over the head coaching duties.

Beard went 47-15 in three seasons at Angelo State, then 30-5 in two years at Arkansas-LIttle Rock. He said it “felt like home” when Tech hired him back to become the head coach prior to last season.

Now, Beard has what seems like the perfect mix on paper. He’s got veterans who have experienced a wide array of ups and downs. Senior Keenan Evans just broke into the top 25 in Tech scoring history with more than 1,200 points. Senior Justin Gray, another four-year player, has started every game this season.

Tech started off 6-0 this season and then lost to Seton Hall. The Raiders kept going and now boast a 4-1 mark over ranked teams, which could make for a dynamite NCAA Tournament resume.

“We were right there last year,” he added. “This year, it is nice to win close games, but we’re just getting started.”