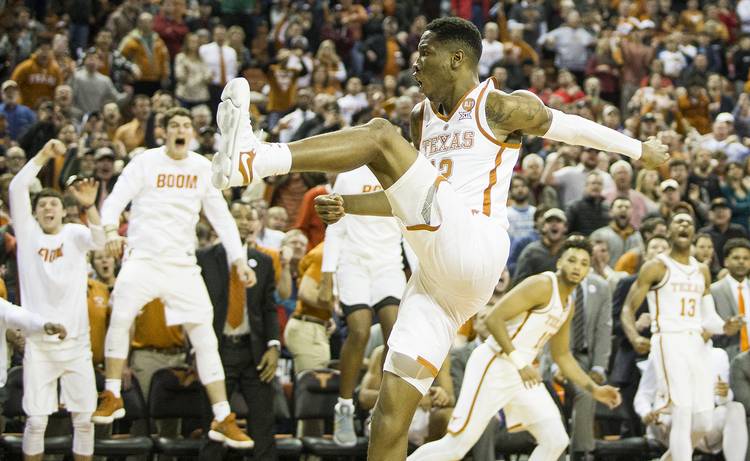 Kerwin Roach II placed his injured left hand flat on the table around 8 a.m. Wednesday so the X-ray machine could get a clean look.

The Texas guard had been playing through pain over the last month, so no need for surgery at this point. It was thought Roach would be out another week, so he wasn’t supposed to play Wednesday night against No. 8 Texas Tech.

“I had said in the group message that I got cleared to play today, and Mo (Bamba) was the first player to call me on FaceTime,” Roach said. “’Are you serious?’ ‘Yes, I’m so serious.’”

Coach Shaka Smart didn’t even know Roach would be cleared until game time. “Can Snoop play or not,” Smart said, “and the trainer winked at me.”

Roach took everyone by surprise at the Erwin Center. The junior defensive ace had a season-high 20 points and threw down a thunderous dunk with 2:06 remaining to clinch a 67-58 upset win. It was UT’s first win over a top-10 team in two years and a bounce-back victory for a group that gave one away against Oklahoma State.

“They definitely had last Saturday’s game on their mind — in a good way,” Smart said.

The Longhorns had four wins over top-10 teams two seasons ago in Smart’s maiden voyage. That’s the strength of the Big 12. Roach and Eric Davis Jr. are the only two scholarship players left from that team. Sure, the Horns want to protect their home floor, but Smart said, “I thought our guys were really motivated to go get a top-10 win.”

Said Bamba, “I think they’re in the top-10, top something. It was an amazing win.”

“Give Texas credit,” Beard said. “We did not play well tonight.”

The Longhorns (12-6, 3-3) had three days to ponder what went wrong in Stillwater. They watched a 12-point lead slip away in the second half. Texas fans, coaches and maybe even the players themselves had to wonder what would happen when Texas got up by 13 with 12:36 remaining.

What made the difference this time? “Three days worth of experience,” junior forward Dylan Osetkowski said.

“We knew it was a similar situation from Saturday,” Osetkowski added. “We’ve been there. So we had a collective mindset of just staying with it, staying aggressive and continuing to flow offensive and defensively.”

The Longhorns simply had to follow Roach’s lead. He started the second half with a driving layup attempt, got fouled but hit two free throws. The career 62-percent free throw shooter was 8 for 9 from the stripe. Then Roach drained a 3-pointer from the left corner, and the Horns had a 10-point lead.

A jam-packed UT student section had a terrific view of Matt Coleman’s theatrical pass to Bamba. Coleman threw one up for Bamba to slam home, and the freshman guard threw up his hands. Ta-da!

The Raiders weren’t done, though. After some bone-headed turnovers, the Horns watched as their lead started melting away. Finally, Davis’ 3-pointer from the right wing gave the home team a jolt. Roach scored four points, and Davis hit another 3-pointer to push the lead back to 12.

Roach got a different perspective from sitting out against TCU and Oklahoma State. “You just see how the team is like a well-oiled machine, and when one missing piece goes out, you see how dysfunctional it could be,” he said.

The guards now know there are undeniable keys to victory. When they penetrate the lane, like they did against Iowa State, TCU and Texas Tech, good things happen. If they choose to sit on the perimeter and just take contested 3-point shots, like they did against Kansas, Baylor and Oklahoma State, things get messy.

“I felt like in the Oklahoma (State) game, we were still fighting,” Roach said, “but in the last six minutes when it’s winning time, we just turned the ball over too much and wasn’t being really aggressive.”

Every game is a learning experience for the Longhorns, now playing with a permanent “AJ1” patch on their jerseys. They’re carrying Andrew Jones’ spirit and a whole bunch of learned lessons with them every step of the way.

As Roach explained, “By the grace of God, that’s all I can say.”

The Dotted Line: Can Texas’ 2018 recruiting class ‘put DBU back on the map?’