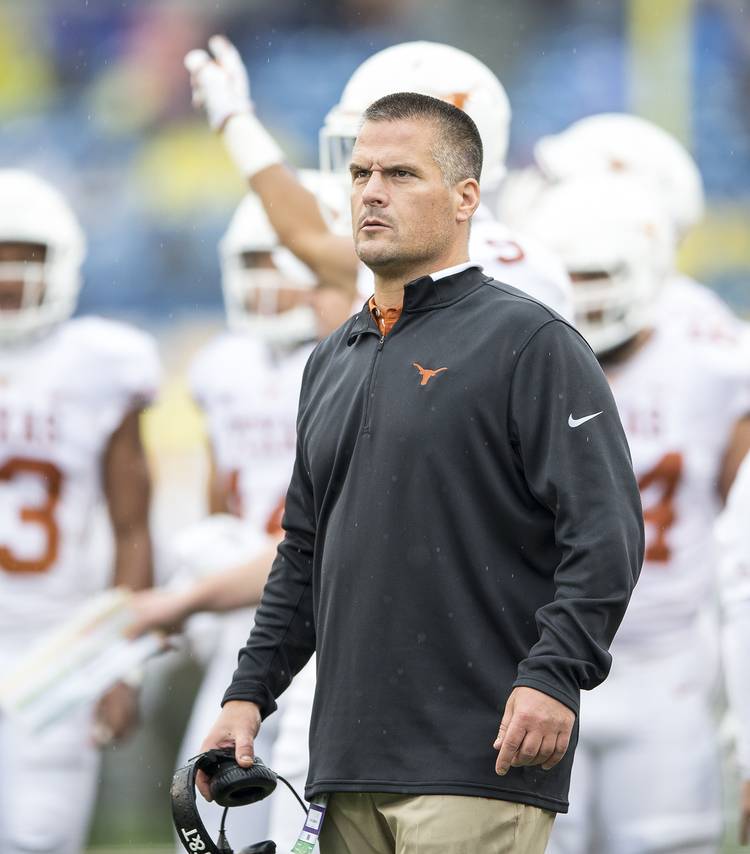 Texas defensive coordinator Todd Orlando stares at the replay board after a play during an NCAA college football game in Morgantown, West Virginia, on Saturday, Nov. 18, 2017. NICK WAGNER / AMERICAN-STATESMAN

It’s hard to find holes in a recruiting class ranked third in the nation and best in the Big 12. Defensive line was the hole for the Longhorns in the 2018 cycle and the commitment of 3-star defensive end and Missouri native Daniel Carson gives Tom Herman and his staff another building block towards the future.

Texas didn’t sign a single defensive lineman during the early signing period despite holding a commitment from defensive tackle Keondre Coburn. The Longhorns expect Coburn to sign Feb. 7 on national signing day and hope to add one or two more players along the defensive line before ending the class.

Here is a closer look at Texas’ newest commit.

Skill set: Carson is a big-bodied defensive end who is an ideal fit in defensive coordinator Todd Orlando’s scheme, which relies on big defensive linemen to take up blocks for athletic linebackers. At 6-foot-5 and 260 pounds, Carson is big enough to become a defensive tackle and athletic enough to play on the edge. His versatility is what attracted Texas to offer Carson and his fit into the scheme was the main driving point in gaining his commitment.

Carson recorded 73 tackles as a senior, including 17 tackles for loss and six sacks in 10 games. He’s the No. 23-ranked strong side defensive end in the 2018 recruiting cycle and the No. 9-ranked overall prospect from the state of Missouri. He took an official visit to Texas on Sept. 9 and hosted members of the Texas staff for an in-home visit earlier in the week.

Immediate impact: Texas needs immediate help at defensive tackle and defensive end and Carson is strong enough to provide the Longhorns with snaps in certain packages. He’s raw and won’t be a three-down player in his first year or two on campus, but that doesn’t mean he can’t make an impact in the two-deep or as depth early in his career. Like most high school linemen, Carson would benefit from a redshirt season, but the depth at Texas may not allow that as an option.

Fitting into the program: The versatility Carson’s body type and athleticism provide Texas should make him a favorite of Orlando. The Longhorn defense thrives on the ability for players to line up in multiple positions against a variety of packages and Carson could remain a big defensive end or gain 30 pounds and spin to defensive tackle. Fellow 2018 commitment Ayodele Adeoye is also a Missouri native despite finishing his career in Florida at IMG Academy.

Recruiting at the position: Texas isn’t done at defensive end. The Longhorns want to add 4-star Joseph Ossai out of Conroe Oak Ridge. The 6-foot-4, 220-pound defensive end is the best edge-rusher in the state and would provide balance at the position with Carson likely to play where Chris Nelson lines up, or even grow into a true nose tackle like Poona Ford. Ossai is a pass-rusher who offers a different dynamic. Texas is also hoping to add a defensive tackle to pair with Coburn.