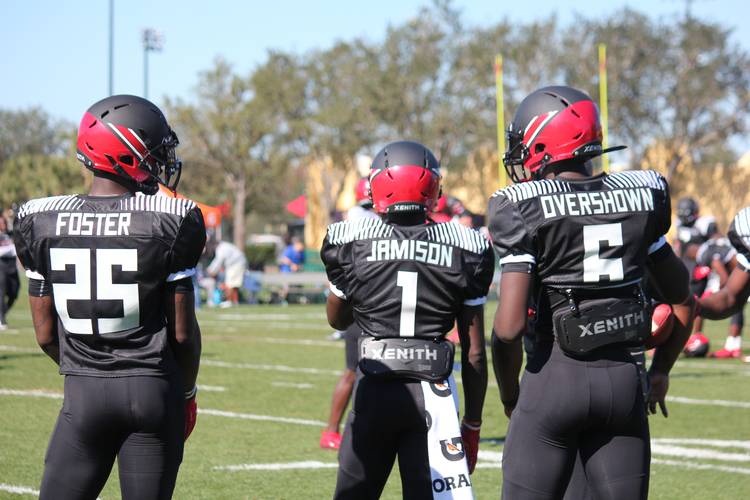 This is the second half of the American-Statesman’s third annual 20 for 20 project, a Longhorns recruiting primer 20 days out of national signing day, which this year falls on Feb. 7. Nos. 1-10 of our 20 for 20 published this morning.

The top six players on the Fabulous 55 are heading to Texas. A year after not signing a single player in the state’s top 10, Tom Herman closed the borders and did a great job recruiting the top talent in the state. It worked out in his favor that most of the elite talent in Texas during the 2018 cycle was in the Houston area, a spot familiar to Herman. It’s possible that the entire top 10 of the Fab 55 stays in-state during this cycle.

The highest-ranked uncommitted prospect on the Fab 55 is Jaylen Waddle, a slot receiver from Houston Bellaire Episcopal who starred at the U.S. Army All-American Bowl. Texas, Texas A&M and Alabama are still in the mix for him. And Leon O’Neal, a safety from Houston Cypress Springs, is still deciding between Oklahoma and Texas A&M.

The rest of the state’s top 10 is either committed or signed heading into the final 20 days before signing day.

Texas, and it isn’t even close.

The Longhorns have already signed or hold commitments from the state’s best running back, wide receiver, defensive tackle, cornerback and safety. Texas already signed the top six players in the state during the early signing period one year removed from not signing a single top-10 prospect on the 2017 Fab 55.

The Longhorns signed the best three cornerbacks and the best three safeties in the state. The cornerback trio of Anthony Cook, D’Shawn Jamison and Jalen Green are national top 150 prospects. The three safeties are even more impressive. Angleton’s BJ Foster is a 5-star prospect and considered the best safety in the nation. Sterns and DeMarvion Overshown are not far behind in the rankings.

The best local prospect for 2018 is Matthew Baldwin, the Lake Travis quarterback who’s heading to Ohio State. Westlake running back Nakia Watson is a running back heading to Wisconsin. Both players will be represented on our final Fab 55 of the cycle. Otherwise, it was a down year for the Central Texas area when it comes to college prospects.

Herman attacked the Houston area like he was still running UH, the program inside the city. Four of the top-five rated prospects in the class are from the Houston area. In total, Herman has commitments from eight players considered Houston products. That’s more than a third of the class.

Texas’ signees, from closest to farthest:

Nineteen of Texas’ 21 commitments utilized the first ever early signing period in December. The only two commitments who didn’t sign were Ingram and Coburn. This was true for most programs and players in the country. Most of the 2018 prospects elected to sign early.

The Longhorns need to continue to add depth on the offensive and defensive lines, plus load up on wide receivers and linebackers.

Expect Texas to be picky at running back and in the secondary after signing a nice class at those positions in 2018. Texas’ lone commitment for 2019 is dual-threat quarterback Roschon Johnson of Port Neches-Groves. He’ll likely be the only quarterback Texas chases.

For starters, No. 9 Texas is a No. 2 seed in projected NCAA Tournament field