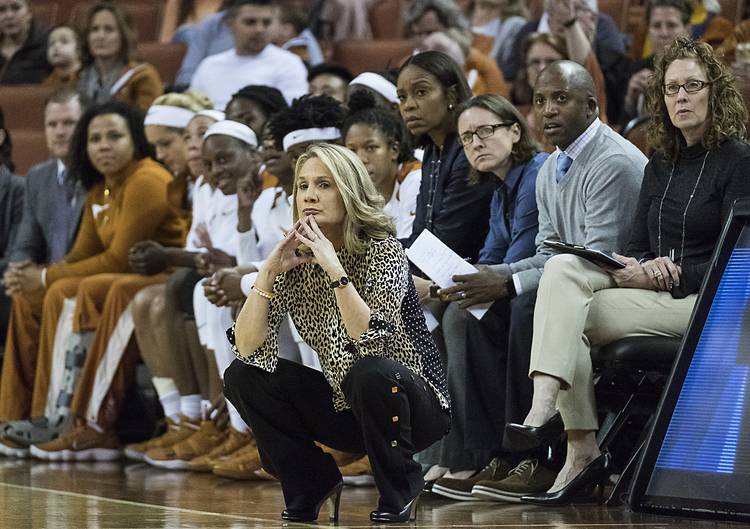 If the NCAA women’s basketball tournament started today, Texas would be a No. 2 seed.

That’s a sign that the NCAA selection committees holds the ninth-ranked Longhorns (14-3, 5-1 Big 12) under a favorable light. But considering the tournament doesn’t tip off until March 16, there’s no reason to get worked up about it now, head coach Karen Aston said Friday.

Aston has more important matters to worry about, including a Big 12 game against Texas Tech on Saturday in Lubbock.

“It’s so early. There’s so much more basketball to be played,” Aston said. “This (early reveal) is more for the fans. There’s not really anything we can discuss and our team needs to focus on what we’re doing every day.”

The NCAA, which announced its initial top 16 teams projection on Thursday night, will have its second early reveal seedings on Feb. 1. The final early reveal will be announced on Feb. 19 — during the ESPN telecast of the Texas-Baylor game in Austin.

Top-ranked and unbeaten UConn was the No. 1 overall seed in the first reveal. Joining the Huskies as projected No. 1 seeds were Mississippi State, Louisville and Oregon. Texas was joined by Tennessee, Notre Dame and defending national champion South Carolina as No. 2 seeds.

Baylor, Ohio State, Florida State and UCLA were No. 3 seeds.

Some might consider Baylor’s seeding surprisingly low, considering the Lady Bears are 16-1 and have beaten their opponents by an average of 35.7 points per game. Baylor was most likely hurt by its strength of schedule, which is ranked 133rd in the country. Texas, by contrast, has the 11th-toughest schedule.

Fourth-ranked Baylor hosts No. 9 Texas next Thursday in Waco.

Moving forward, Aston said she was pleased by the improvement that transfer post Jatarie White has made following her 18-point, six-rebound performance in Monday’s 75-71 loss to UConn. After sitting out last season, the former South Carolina player is beginning to blossom in burnt orange. White averages 11.1 points to go along with a team-high 6.1 rebounds a game.

“Every game has been a lesson for each of us,” White said. “We have to take everything that people are talking about in practice — and even out of practice — and apply it to our game.”

On Monday, the Longhorns held their own against UConn under the glass. Senior forward Audrey-Ann Caron-Goudreau contributed 7 points and 11 rebounds but was a defensive force at times.

With the game still in the balance, she blocked a shot by UConn post Azura Stevens; she leads the Horns with 21 blocks.

The Longhorns led UConn for 22 minutes and won the rebounding battle 36-30, but losing a close game was little consolation for the team’s older players.

“Every time you lose, it kind of stings you a little bit, but at the same time I think that it was a good growing point for us,” guard Brooke McCarty said. “And it showed us what we can do.”

Texas can build off the UConn loss, Aston said.

“Before we got on the court (on Monday), we talked about the game being a good opportunity to measure who we are and who we can be,” she said. “As a coach, and as a fan of Texas basketball, you would hope that this group of girls is who they’ll be all the time.”