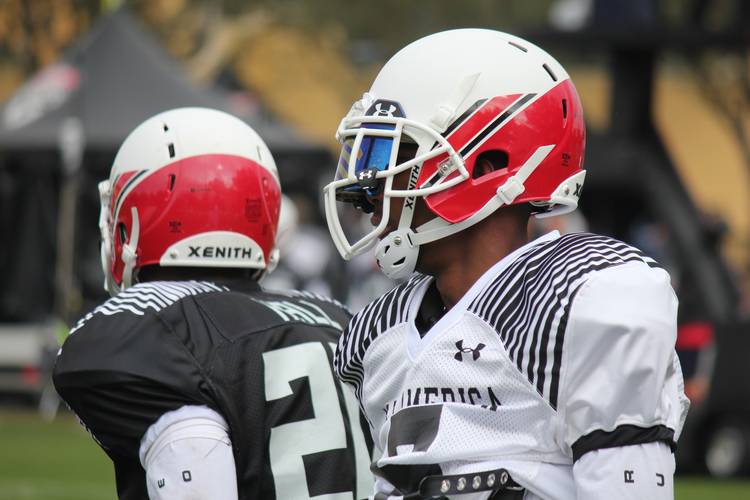 Three weekends remain before national signing day on Feb. 7. The Longhorns, as well as every program in the country, use these final weekends to host official visitors, a mix of commitments and top targets. Texas added its 22nd commitment of the 2018 class Friday morning when defensive end Daniel Carson (Mo.) pledged to the Longhorns and became the first defensive end to commit during the cycle.

Texas expects five prospects on campus over the weekend, including one signee and four targets. Here is the list and what is known about each of the visitors entering the home stretch of the 2018 cycle.

Dicker signed with Texas during the early period but was unable to take an official visit in 2017 because his team was chasing another state title game. Dicker will be expected to compete for the starting duties as a place kicker and on kickoffs after the struggles of JUCO transfer Joshua Rowland.

Texas is making a strong push for Moore to become the third wide receiver of the 2018 class and the Longhorns are considered the new favorite with Moore set to announce his commitment on national signing day. The 6-foot-1 wide receiver can play outside or in the slot, and his twin brother, Jordan, is committed to Texas A&M. Moore is a smooth route-runner and a polished wide receiver for his age. He competed at The Opening Final and at the Under Armour All-America Game in Orlando on Jan. 4 alongside numerous Longhorns.

Had some great conversations with coach Hand @CoachHand and coach Warehime @CoachDWarehime yesterday. Immense amount of respect for both of these programs! #Auburn #Texas pic.twitter.com/v7CoqznPOG

The biggest need for Texas in the offseason is to fix the offensive line. It’s hard to do that in recruiting unless a program relies on JUCO prospects. Texas signed four offensive linemen during the early period, including Mikey Grandy, the lone JUCO in the class. Anderson, who played high school football at Westlake in Austin, is now on the market after announcing his intention to transfer from Rice. He’s on Texas’ campus this weekend and would give the Longhorns another choice at offensive tackle in the 2018 season.

Williams is listed as an athlete, but Texas likes the 6-foot-2, 240-pound prospect is liked by the Longhorns as a defensive end or outside linebacker. Williams also holds an offer from LSU and it is never easy to convince a Baton Rouge native to leave Louisiana and spurn the Tigers. There may not be room left for him in the 2018 class at LSU, which would play in Texas’ favor. A solid impression by Texas over the weekend could mean Williams commits to Texas by the end of the weekend.

It’ll be interesting to watch the recruitment of Okechukwu now that Daniel Carson is in the fold. Texas still feels good about its chances with defensive end Joseph Ossai and Williams, who is also on campus for an official visit. It’s unclear how many defensive ends Texas would take and Okechukwu is yet to receive an offer from the Longhorns. That could change over the weekend, and if it does, Texas is in great shape.

For starters, No. 9 Texas is a No. 2 seed in projected NCAA Tournament field