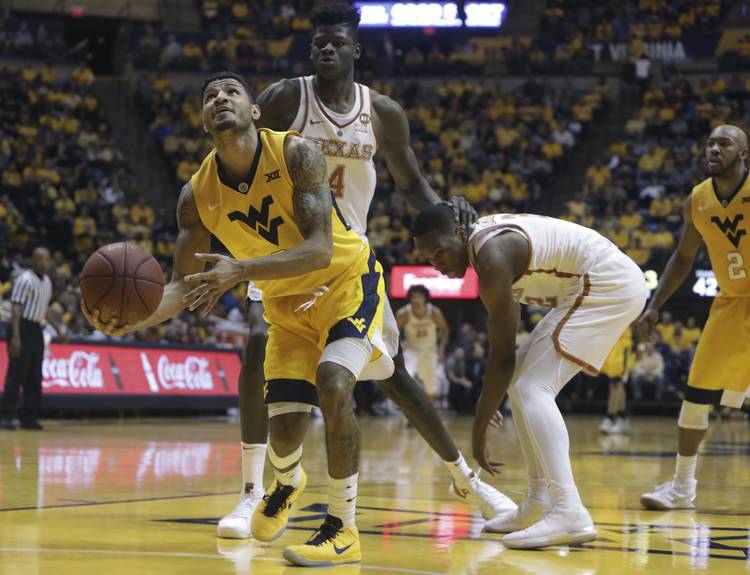 “Tough one,” the Texas freshman said. “Got our ass kicked.”

His teammates agreed. Junior Dylan Osetkowski looked out into a near-empty WVU Coliseum and said: “Tough one. Definitely not what we expected.”

Freshman Mo Bamba felt the Longhorns started strong against the sixth-ranked Mountaineers on Saturday. “I thought our guards kind of punked them at first,” he said. “But throughout the course of the game, they got the better hand in it.”

Such was the deflated nature of a blistering 86-51 loss. Texas (12-7, 3-4 Big 12) managed only two points in the final 8 minutes, 51 seconds of the first half. Without Jase Febres’ 3-pointer and two Jacob Young free throws late, it would’ve been the lowest-scoring game in coach Shaka Smart’s three seasons in Austin.

The 35-point loss was the biggest blowout Texas has endured under Smart. It topped the 30-point win Kansas registered on Feb. 29, 2016. It was also the biggest loss Smart has ever taken in nine years as a head coach.

This was also the biggest victory West Virginia has ever posted over another Big 12 opponent since joining the league in 2012.

WVU’s Jevon Carter, the first player on the floor, started the day wearing an orange warmup shirt that said, “Big 12 Strong” in honor of UT’s Andrew Jones, who is battling leukemia. He finished with a game-high 22 points.

James Bolden pumped in 19 more as the Mountaineers (16-3, 5-2) snapped their two-game skid in emphatic fashion.

“We actually tried to run the offense we are supposed to run, and not whoever gets it shoots it,” West Virginia coach Bob Huggins said.

Huggins might have his team’s offensive problems figured out. But for Smart, things are only getting more confusing. This team struggles to score. The Horns are almost guaranteed to have a 4- to 5-minute stretch every game when they can’t get anything.

The Dec. 18 win over Tennessee State (47 points), this West Virginia loss and the Dec. 12 loss to Michigan (52 points) make up three of the four lowest-scoring games in Smart’s tenure at Texas. The December losses came when Jones was out with a fractured wrist.

The Horns are playing stout defense, Saturday’s debacle not withstanding. Every Big 12 game is usually a street fight. But they’re averaging a league-low 71.9 points per game with a future NBA lottery pick at center.

Jones was averaging 13.5 points before his season ended. Still, emotions about Jones aside, if this team cannot figure out how to squeeze out more points, it’ll be a long, hard road to March.

“These last few games, we’re played with some different lineups,” Smart said. “We’ve got to get better with our execution with three bigs. When we get tentative and when we have certain guys — you know, when it’s not their day, which is what we had today — then we struggle to score; we do.

“Today, we didn’t have one guy in double figures.”

That “Press Virginia” mantra was on full display early as the Mountaineers tried to land the first punch. But Texas went hard at the rim early and found success. Jericho Sims missed two dunks, getting fouled on the second, and Coleman threw a lob for Bamba to slam home. Texas took an early 8-4 lead and checked a major work item — start well on the road.

Then Osetkowski threw the ball into the scorer’s table. Texas got whistled for a 5-second violation because it couldn’t get the ball inbounds fast enough. Kerwin Roach II got whistled for an offensive foul by Roger Ayers, the same official who gave him a technical at Iowa State.

The Horns kept battling, though. Young hit a 3-pointer from the right wing, and Roach made the second of two free throws with 8:51 before halftime. And then it all stopped. WVU finished the half on a 15-2 run, and Texas was down by 10.

It was still a 10-point game when Osetkowski blocked a 3-point attempt that forced a shot-clock violation with 11:56 remaining. But the Mountaineers went on a 10-2 run and started pulling away.

Texas shot 34 percent overall and went 3 of 15 from 3-point range. UT has a quick turnaround and will host Iowa State on Monday.

“There’s nothing wrong with the offense,” Coleman said. “It’s just us just not executing, not capitalizing on their mistakes. West Virginia just did a hell of a job defensively taking us out of our things.”