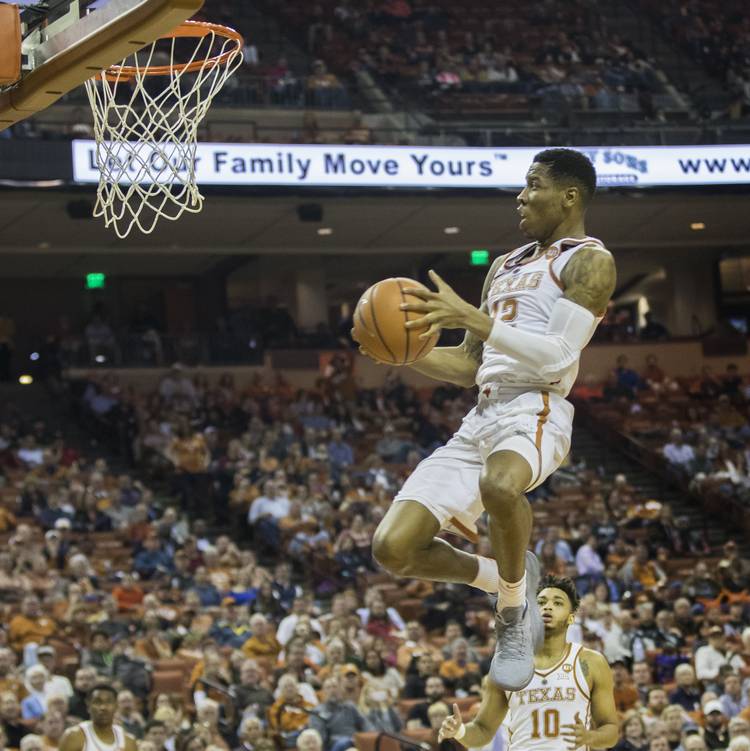 If these Longhorns truly cared for their teammates, someone would’ve done a number on Kerwin Roach II a long time ago.

Smash that left hand of his with a baseball bat. Close it in a car door. Force it into a wood chipper, if that what it takes.

Ever since Roach’s return from a fractured hand injury, he’s been a fistful of problems for the opposition. On Monday, Roach tied his career highs with four 3-pointers and 22 points in a 73-57 win over Iowa State at the Erwin Center.

A career 64-percent shooter at the free throw line, Roach has made 16 of his last 20 at the stripe. The junior has a career 30-percent shooting average from 3-point range. And yet he’s 7 for 12 in the last three games.

Asked if somebody should’ve broken that hand sooner, Roach said, “I think so. It helped a lot. The time I spent off, I rested my body. I did a lot of form shooting. I got my mechanics together and just really took my time doing my shots and not rushing it.”

Texas (13-7, 4-4 Big 12) was eager to rush into Monday’s game against Iowa State after that dreadful 35-point weekend loss to West Virginia. Saturday’s debacle was the biggest loss in coach Shaka Smart’s nine seasons as a head coach. But with a tight turnaround, there was no time to worry about the past.

“Our motto coming into this was, ‘Somebody has to pay for it,’” freshman Mo Bamba said after racking up a new season-high 24 points and 12 rebounds. “Unfortunately for Iowa State, it was them.”

The Longhorns came out full guns blazing. Roach hit back-to-back 3-pointers. Dylan Osetkowski scored on quick move that got his defender up in the air and drew a foul. Jericho Sims scored inside, and Mo Bamba threw down a dunk. Texas suddenly had a 20-9 lead.

Come to think of it, somebody should hit Bamba with that baseball bat before games, too. He clearly turns it on when properly motivated.

Iowa State’s Cameron Lard went right at Bamba defensively and blocked the big man’s shot attempt with 13:57 remaining. “I was in the right spot at the right time,” Lard said. “I was able to make a play.”

On the next possession, Bamba threw down a vicious two-handed jam and hit a 3-pointer two possessions later. Texas then had a 54-43 lead. It capped what Smart called “as clean of a game he’s played in terms of efficiency.”

Bamba was 9 for 11 shooting, had three blocks, two steals and only two fouls in 30 minutes. “Those of you guys giving me a hard time about his threes, he was 2 for 2,” Smart said.

The entire Cyclone Men's Basketball family is praying for a speedy and full recovery for Texas star Andrew Jones. pic.twitter.com/K7er8K3SMI

Said Iowa State coach Steve Prohm, “I watched our tape the other night playing him. I don’t remember what numbers he had (on Jan. 1). Today, Bamba’s pretty good today. Just a presence.”

It wouldn’t be a Texas game without a long scoring drought. This one came at the end, actually, and it didn’t really matter.

Texas led 65-49 after Eric Davis Jr.’s 3-pointer with 6:25 remaining. The Horns wouldn’t score again until Davis started a slew of UT free throws — four by him, two by Bamba — with 1:03 left. The only UT field goal scored in the final 6:25 was Roach’s gimme layup with 7 seconds left. Iowa State missed seven of their last nine shots.

The most important thing about Monday’s win may have been what happened between the Horns’ ears. Now, they spend the rest of the week going over various aspects of the West Virginia loss with a clear mind. Winning soothes the soul.

Texas does not play again until Saturday’s non-conference clash with Mississippi in the Big 12/SEC Challenge.

“I’m glad we won,” Smart said. “If you don’t win the game, then Saturday’s not flushed. Then it turns into Saturday and Monday. But the reality is what we need to do is not only flush Saturday but learn some things from tonight and Saturday, but flush this, too.”

Texas’ next Big 12 game won’t come until next week’s road trip to Texas Tech on Jan. 31. Until then, maybe the Horns will look to see what else they can smash. Maybe they’ll start with outsiders’ perceptions of their .500 league mark.

The Dotted Line: Who is the best player in Texas during the 2019 recruiting cycle?